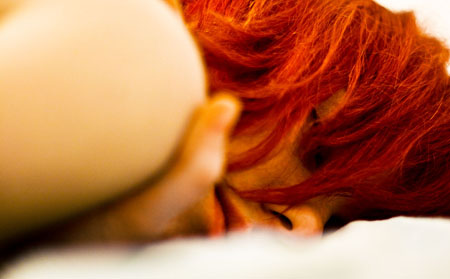 A full night's rest is actually made up of a chain of sleep stages. [Credit: Georgios Wollbrecht]

It’s a disorienting experience to be awakened by a phone call while curled up for a good night’s sleep. Hearing muffled fumbling for the phone followed by a groggy greeting, the caller usually asks, “Oh, were you sleeping?”

My most common answer is, “I don’t know. No. I’m not sure.” In that state of confusion, the last thing I’m capable of is analyzing the inner workings of my body to understand if I am awake or asleep. Luckily, there is a lot of science to explain what it really means to be asleep, and what happens to get us there.

There is no universally agreed-upon definition because falling asleep is not a split-second occurrence, not an abrupt switch from awake to asleep. Rather, it is a gradual progression of stages in which body and brain activity changes.

Sleep onset is “sort of a reflection of your brain switching from one way of thinking to another way of thinking,” says Scott Campbell of the Cornell Medical School Laboratory of Human Chronobiology. Besides brain activity, sleep researchers measure eye movements and muscle tension to observe a person falling asleep.

Stage 1 finds us dozing off, with our brain waves and muscle activity slowing down. You witness this very light sleep when the airplane passenger next to you suddenly jerks his leg and sends your five-dollar cocktail flying.

Some people would call that sleep but, when woken during Stage 1 and asked if they were asleep, about 80 percent of people will say they were not, according to Campbell.

In Stage 2, 60 percent of people would deny it, though Campbell says researchers agree that this is sleep.

Usually comprising about half of sleep time, Stage 2 means a calmer brain wave pattern and no eye movements. Breathing slows and body temperature drops slightly. A person in Stage 2 has lost touch with his surroundings but can easily be shaken awake.

By Stages 3 and 4, though, waking someone up probably requires an annoying alarm. Breathing slows even more into a rhythm. Blood pressure and body temperature drop again and muscles relax. These two similar stages are called “slow wave sleep,” with the slowest of all brain waves.

This is the restorative, deep sleep we crave when we’re tired. Scientists believe that much of the body’s regenerative work, like protein building and hormone release, happens at this stage. Slow wave sleep is what every mother loves to see in her child: just a peaceful, resting body.

About 90 minutes after falling asleep, REM sets in and hypes up the slow wave sleep into a state that’s very close to being awake, with brain waves of the same speed or even faster. Most but not all dreams occur in this phase.

The heart beats quickly, blood pressure rises, eyes dart around and breathing becomes rapid and shallow. The body is more or less paralyzed; arm, leg and facial muscles might twitch, but the body won’t move. REM can last from five to 30 minutes.

After REM, NREM starts again. The 90- to 110-minute cycle of these two phases repeats four to six times per night. As the night progresses, the time spent in REM increases and deep sleep decreases so that when the rooster crows, it’s almost all Stage 1, Stage 2 and REM sleep.

Hormones, chemicals and regions of the brain interact to drive the sleep cycle. The body’s biological clock, or circadian rhythm, synchronizes a person’s sleep schedule with the day/night cycle’s changing amounts of light. A tiny area of the brain, the suprachiasmatic nucleus (SCN), interprets light signals sent from the eyes through the optic nerves.

Light triggers the SCN to direct the brain’s pineal gland to release the hormone melatonin. There’s a big burst of it into the body just as we go to sleep, says Campbell, and it probably turns certain areas of the brain off and on as we transition into slumber mode.

Adenosine is another chemical thought to induce sleep. Levels increase during the day, making us sleepier the longer that we’re awake in an attempt to reach homeostasis, or the body’s preferred “steady state.” Once we fall asleep, adenosine levels drop, reducing the need for sleep and eventually prompting us to wake up.

Cortisol, known as a stress hormone, follows a reverse path. It bottoms out right before bedtime, allowing us to relax, but then increases throughout the night to encourage a bright-eyed and bushy-tailed start to the day.

Next time someone interrupts your dreams of sugar plums in lollipop land, you can tell them, “Yes, I was sleeping. I was in the REM stage with fast brain waves and rapid breathing. I still have another sleep cycle to go, so I’ll call you back.”

Thank you for this article. As Executive Director of the National Shiftwork Information Center I am always looking for helpful information about sleep to direct our shiftworker readers to. I will certainly point to this post, and I invite your readers who are shiftworkers to come check out our sleep posts at http://shiftworkinformation.blogspot.com/search/label/sleep.

And we have a Tips for Getting Better Sleep at http://shiftworkinformation.blogspot.com/2008/01/tips-for-getting-better-sleep.html.

My 6 year old daughter has a sudden increase in body temperature 15 mins after falling asleep. I often find her wet through with sweat. Is this a common problem? Is it hormonal?

Once in a while I wake up feeling hot and my bed feels hot also. I am 66 years old. This just started these last few months. I keep my house around 74.

They should say what chemestry happens when you sleep

I have been waking up at the same time at 3am in the morning every night wide awake and cant get back to sleep. The same time i never done this before what is going on and does milk really help.

hi people how ya doing

I like it. That’s why I feel this kind of push from my body when I’m all relax and sitting down, slowing my heart rate. This is soooo cool, I’m going to tell everyone about this.

but yes this is very informative.of all the pleasures we could possibly encounter id say sleep is the best.

i am only a kid simplify it plz

About one a month, I have something weird happen to me about 3 nights in a row. Every night in that period of time, I dream many different dreams. Each morning, I can recall about 6 different dreams. I wake up after each one. This is very stressful because when I wake up that many times during the stage of sleep when youre supposed to be “recharging”, it feels like you havent gotten any sleep at all.

A couple of times i have seen my daughter sleeping all sweaty is that normal for a teen?

i think this realy made me understand

yvonne is smoking hot and so is casrolone when she sleeps

you go into a small sleep.and thats all i know

Well, I might not fall to sleep in a split second, but it sure seems like it. I am either awake or asleep, no in between. Just like a light switch. Just how, does my body put me to sleep in a second? What puts me into sleep mode? What makes a light sleeper or a deep sleeper? Thanx- Ron

Is it possible to go directly into reparative REM sleep, instead of going through previous stages? Seems one could then cut down on amount of needed sleep.