Survival of the Fittest Isn’t One-Size-Fits-All

A lizard family tree offers clues to the balance between reproduction and survival. 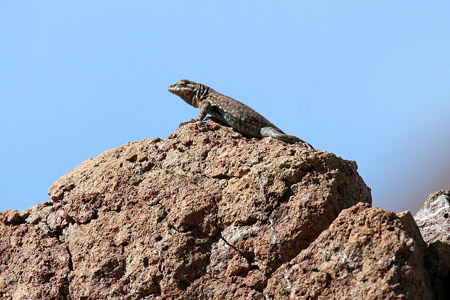 Side-blotched lizards duke it out in a genetic battle of the sexes. [Credit: Erin and Lance Willett]

A battle of the sexes is raging in side-blotched lizards, but this is no spectator sport. Until recently, even the scientists who studied them did not have an accurate play-by-play. The conflict happens at the microscopic level of the gene where it is difficult to tell how much it costs to reproduce because some lizards take their genetic secrets to the grave.

“There’s always been this missing piece of the puzzle,” says Andrew McAdam, an evolutionary ecologist at the University of Guelph in Ontario. The lizards that die early and the males, which don’t produce eggs but still carry egg-laying genes from their mothers, have not always been included in estimates of reproductive cost.

McAdam and his colleague Barry Sinervo used a family tree to determine how well lizards survive if they produce different numbers of eggs. When the researchers examined 20 generations of 7000 side-blotched lizards—including males and females that died young—they exposed a lizard tug-of-war. Their results were published recently in the Proceedings of the Royal Society B.

Although the lizards do not actually fight, the battle is over survival. The scientists found that females survive better with the genes for more eggs, while the same genes make males less likely to survive. In other words, “the genes that make you a good female make you a bad male,” says David Reznick, a professor of biology at the University of California, Riverside, who was not associated with the research.

By counting how many eggs female relatives laid, the researchers could approximate how many eggs the males would have laid had they been females. McAdam and Sinervo, the lead author of the study and a professor of ecology and evolutionary biology at the University of California, Santa Cruz, also used the same technique for lizards that died before laying eggs.

Because the researchers knew the parentage of each of the 7000 lizards, “it’s a pretty remarkable study,” says Loeske Kruuk, co-editor of the journal issue, who studies evolutionary biology at the University of Edinburgh in the U.K.

The tiny lizards, which are found in the southwestern U.S. and northern Mexico, are not endangered but offer insight into how evolution works. Common sense would tell scientists that if females produce lots of eggs, they will not be able to waddle fast enough to escape predators. However, the researchers found that more fertile females have a better chance of survival.

“The answer is in the males,” says Sinervo, who is also McAdam’s former mentor. Males fare better if they carry the genes for fewer eggs. The researchers think that hormones associated with increased egg production may hurt males’ survival but help females.

In the grand scheme of things, this battle creates a balance between the sexes and is part of what preserves diversity. If evolution selected the genes for lots of eggs in males and females, scientists might only see lots of eggs.

For other traits, the lizards use a strategy to help ameliorate the tug of war between the sexes. Lizard moms will mate with more than one male and then “sort” the sperm to ensure that all of their babies have the best genes. For example, they give sperm from big males to their sons and sperm from small males to their daughters. Sinervo thinks something like this also could be happening with the genes that determine the number of eggs, although he has yet to investigate.

Do wasps have the genetic blueprint for motherly love?

Read about the father of DNA barcoding.