At last Friday’s presidential debate Senator John McCain made the following statement, railing against earmarks for pork-barrel spending: “You know, we spent $3 million to study the DNA of bears […] 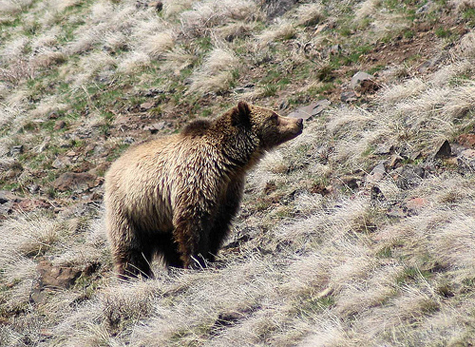 “You know, we spent $3 million to study the DNA of bears in Montana. I don’t know if that was a criminal issue or a paternal issue, but the fact is that it was $3 million of our taxpayers’ money. And it has got to be brought under control.”

But was spending $3 million dollars on a bear DNA study as wasteful as McCain makes it out to be?

The senator refers to the Northern Divide Grizzly Bear Project, which seeks to determine the number of grizzly bears living in a big chunk of northwestern Montana called the Northern Continental Divide Ecosystem.

The project scientists grab grizzly hair snagged on trees and extract the DNA from it. Bear DNA is like a unique fingerprint that can identify individuals (unless they happen to be twins), as well as their sex. According to grizzly experts this is a more accurate method of counting than simply trying to observe the bears in the wild. Recent estimates (pdf) based on the DNA evidence put the number of bears in the area at 765, more than two times earlier estimates.

Ironically, even though McCain criticizes this government spending as wasteful, CBS news reports that it “was backed by Montana ranchers, farmers and Republican leaders as a step toward taking the species off the Endangered Species List.” They added that getting the bears off the list “could help ease restrictions on oil and gas drilling, logging and other development” in the area.

Wait a minute, what Republican wouldn’t support a study that might lead to deregulation? Let’s give McCain the benefit of the doubt for a moment—maybe he’s a closet environmentalist who wants us to remain ignorant of the grizzly’s numbers so they can remain under the protection of the Endangered Species Act.

Or perhaps McCain is just guilty of the same thing many other Republicans have been in recent years: politicizing scientific research that they don’t care to understand, even when knowing the unbiased truth, for better or worse, might support their own agenda.

Are polar bears a new victim of the cold war?

Adam T. Hadhazy blogs about about what Democrats and Republicans want in a presidential candidate.