What happens when your arm “falls asleep?” 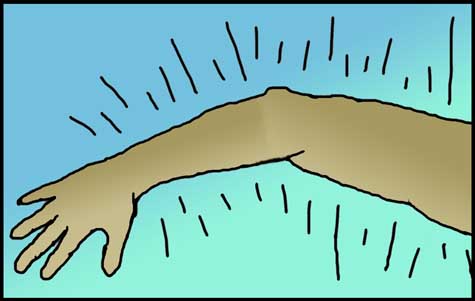 Pins and needles? It's all in the nerves. [Credit: Molika Ashford]

Suddenly you’re awake, but the arm underneath your pillow is not. The crooked limb feels heavy and deadened, and you untuck it with difficulty as that aching, tingling sensation known as “pins and needles” sets in.

What’s happening in your arm technically goes by the name of paresthesia. In most instances, paresthesia occurs when pressure from sleeping or sitting blocks the blood flow to nerve fibers in some part of your anatomy. Nerves need fresh oxygen and nutrients to function properly, and without them, nerves go a bit haywire.

“In paresthesia, it’s like part of the nerve has shorted out,” says Dr. Naomi Kleitman, the program director in repair and plasticity at the National Institute of Neurological Disorders and Stroke in Bethesda, Md. “Some of the sensory signals from your arm can’t get back to your brain the way they normally would.”

Nerve fibers act like electrical wires splayed throughout the body. When they’re working properly, nerves provide a pathway to pass along the brain’s commands and also route sensory information “back upstairs” for processing.

While snoozing , the weight of your head puts pressure on the blood vessels that thread through your arm, cutting off circulation. Such tie-ups prevent energizing sugar and oxygen from reaching the nerve fibers. This blood drought sabotages the normal flow of sensory data to the brain as the parched nerves start firing off messages at random.

“Some of the nerves start discharging spontaneously,” says Dr. Robert LaMotte, a professor of anesthesiology and neurobiology at Yale University in New Haven, Conn. “This sends a chaotic barrage of impulses to the brain.”

Compounding this cacophony is the fact that several kinds of nerves detect different sorts of stimuli. “Some are for temperature, some for touch, and others help you know your place in space,” says Kleitman. When these various feelers get scrambled, the brain misinterprets the signals and generates a range of sensations, including prickly pain, warmth and numbness. This neural static only gets worse after you’ve repositioned the arm and blood gushes back in, further jazzing up those misfiring fibers.

Despite the nerves buzzing under your skin for the next couple of minutes, you are far more annoyed than alarmed as you start to doze off again. But is this paresthesia, even when fleeting, dangerous in any way?

“It is possible to damage your nerves, but probably not through occasionally sleeping funny,” says Kleitman. In experiments to study paresthesia, patients have kept blood pressure cuffs on their arms for over an hour without any permanent ill effect, says Yale’s LaMotte.

Nevertheless, if that tingling sensation isn’t wearing off, it could mean you have a genuine medical problem, like a pinched nerve, for instance. Pinched nerves can strike when bone, muscle or connective tissue inside your body compresses a nerve fiber, rather than an external source, such as the seat of a chair or your resting noggin. A common case of a pinched nerve is carpal tunnel syndrome. This flares up when swollen tendons in the wrist squeeze a nerve that enables feeling and muscle movement in the hand, resulting in uncomfortable paresthetic episodes.

So when it comes to paresthesia, pay attention, and see a doctor if the bothersome sensations don’t fade away.

There is no risk the blocked circulation will lead to clots that will be released once the circulation is resumed and could endup reaching the brain or lungs?

I have the same question as TiagoTiago

Hi!My arms fall asleep every night! When I go to wake it up it feels like something in my hand is stretching like a trampoline. Also, my hand doesn’t want to stay awake, it will just start buzzing again and go right back to sleeo. What do I do???

there was this one night where i was sleeping and i suddenly woke up at about 3pm? my eyes were still asleep but i couldnt feel my left arm anymore. i took my right hand and started to feel my left fingers but i couldnt feel anything. i got really scared because i thought it was someone’s hand just laying on my pillow. i tried gliding my hand down to my arm but it felt like it wasnt attached to my hand so i thought maybe i didnt have a hand anymore. it took about two minutes for me to realize that my hand was just asleep and that i could finally feel it again. believe it or not i did cry a lot after.

I had a very similar experience. When I woke up with my arm limp, purple, and completely numb I automatically assumed it was somebody else’s arm and hand. It scared me to death! Of course, since I was still a bit loopy from just waking up, I overdramatised the whole thing. I was afraid that my arm was out of my control and that it would somehow hurt me. Not the first time that this has happened but it’s terrifying for sure!

Wow. That’s good to know thanks! I picked up from somewhere at some point that if your limb is asleep long enough the blood goes toxic and when you wake up you will die as the toxic blood reaches your heart. For some silly reason that always stuck with me, and just now when I woke up after sleeping on my arm for about at least an hour I wasn’t entirely sure if I’d make it which is why I am reading this! Haha.

My husband and i went to sleep one night, woke up next day and his arm was numb, been almost a week now and he is still numb from elbow down his right arm, what can u advise us to do?

It isn’t a lack of blood flow that causes the numbness and or tingling. It’s caused by direct pressure on a nerve. That’s why your leg can ‘fall asleep’ while sitting on the toilet. There’s no blockage of blood flow on the toilet…. as a matter of fact you can even reposition (something that would resume blood flow if it were indeed blocked) and it still will continue to progressively get more and more tingly because the nerve still is being pushed on. If this were caused by a lack of blood flow there would be an enormous risk of blood clots becoming embolisms as soon as the person woke and restored blood flow. Anytime blood flow is compromised there is an increased risk of blood clotting.

By the way, any pressure on a nerve can cause that sensation….not just pressure from sleeping on it or laying on the body part. People with herniated discs get this sensation due to the disc putting pressure on the spinal cord.

i honestly like the way an asleep arm is am i weird ?

David Pitcher that same thing has happened to me. I think l slept on my right arm for a long time this past Sunday and now l have on and off tingling/numbness in that arm. It’s only been 3 days for me though. I have to make myself sleep on my back only, for now. I wish someone could give us some advice. I don’t want to run to the doctor for them to tell me it’s a pinched nerve that will rectify itself with some time.

Does anyone know what to do to get your arm to “wake up”? I always hear to shake it or move around, but it doesn’t always help.

When it starts to “wake up” it hurts,

Isn’t the “blood flow/circulation getting cut off” a myth? If blood flow really did get cut off, and for this long, the tissue would die. You’d wake up with irreparable damage and maybe even black flesh.

Same with me Daniel. I do like how it feels in a weird way