Bigger Is Not Always Better

One ugly insect overturns assumptions about the best mate. 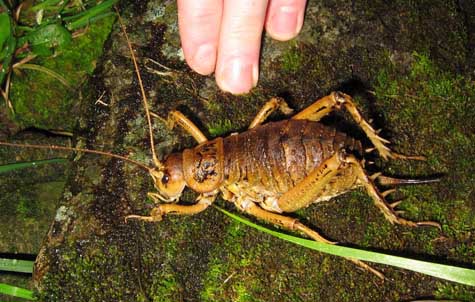 Size does matter for the giant weta . . . but not the way you might think. [Credit: Laura Molles]

Think bighorn sheep locking horns. Think rhinoceros beetles battling. Think grizzly bears wrestling during mating season. The competition is fierce: only the biggest and strongest males will win the coveted opportunity to pass their genes on to the next generation.

But not always, it turns out.

A study in the September issue of The American Naturalist is giving new hope to little guys everywhere. The study focused on an oversized cricket-like insect from New Zealand called the Cook Strait giant weta and concluded that in this species, evolution may favor smaller, more mobile males—in this case, males that can travel a longer distance for sex.

This study is the latest to suggest that the traditional “bigger is better” assumptions about mate preference in the animal kingdom are sometimes untrue. A growing body of evidence suggests that mobile and agile males in several species may fare better in the sexual sweepstakes than their beefier competitors.

“Our findings provide strong evidence for another mechanism by which sexual selection acts,” states Clint D. Kelly, a biologist at Iowa State University and the lead author of the study.

Sexual selection is the evolutionary force that drives physical differences between males and females of the same species, making them more attractive as mates. Traditionally, scientists have assumed that sexual selection exercises its strongest influence in animal species where males must physically compete against other males or make showy displays to win a female’s attention.

“This isn’t necessarily the case,” says Kelly, who along with his team tracked the giant weta on New Zealand’s Maud Island.

This nocturnal insect, whose name translates in native Maori as “god of ugly things,” is one of the heaviest insects in the world, weighing up to 71 grams (2.5 ounces), about as much as a peanut butter and jelly sandwich. According to Kelly, their large size and strong earthy odor made them easy to spot and collect for the study.

Kelly’s team tracked the weta using data collected from a radio transmitter glued to the insect’s body and found that smaller males moved farther and faster at night. The larger males generally traveled less than 1 meter (3.2 feet) a night, far below the average of 19 meters (110 feet) a night recorded for all males. As a result, the smaller males had more luck finding female wetas and were more likely to be paired with them the next morning when Kelly and his team radio-tracked the males to their daytime refuges.

These findings not only help scientists understand the evolutionary forces that shape a species—they may also have important conservation implications for the giant weta. The insect went extinct on the New Zealand mainland over a century ago; rats accompanying European settlers made short work of the big, juicy weta. Today it can only be found on rat-free offshore islands, where it is currently protected under New Zealand law.

Kelly suggests that this information could be valuable if conservationists are interested in building a captive breeding program for the weta in the future. Enclosures would have to be built big enough to allow males to outrace their opponents for mates as they do in nature. According to Kelly, this would keep the gene pool and individual organisms healthy and fit for survival.

Tamas Szekely, a biologist at the University of Bath in the United Kingdom, has observed similar sexual selection behaviors in other species, including bustards and shorebirds. A female bustard will mate with the male bird who makes the most impressive aerial courtship displays; smaller males tend to be more agile and acrobatic.

This type of sexual selection for smaller males may also be at work in bats, fruit flies, and some species of primates where the males are smaller than the females, according to Szekely.

Where do human males stand on the sexual selection spectrum?

“Human males don’t possess any very remarkable sexually selected physical traits: we have no blue rear-end like a mandrill, or horns,” says biological anthropologist David Waynforth of the University of East Anglia in the United Kingdom.

In this way, human males are similar to giant weta males—they don’t have to compete physically with other males or make showy displays to woo females (though it sometimes helps), so the influences of sexual selection are subtler at first glance. However, unlike the giant weta, research shows that women in modern industrialized societies tend to prefer men that are taller than them, suggesting that the old “bigger is better” rule still holds partially true for humans.

Check out these crime-detecting bugs.

Sounds pretty interesting, I’d like to have my own giant weta.

I think that the bigger giant wetas probably still steal the smaller ones lunches.

Very intresting, looking at setting up a similar monitoring programme in Hamilton, New Zealand with our local scouts/adventureres to study tree weta in our park at Hillcrest (yep not the good old giant ugly one , just the tree ugly ones!) Intersted to read more and get in contact with instigators of the reported project.
thanks