A recent Ebola Reston outbreak among pigs in the Philippines is cause for concern among some scientists. 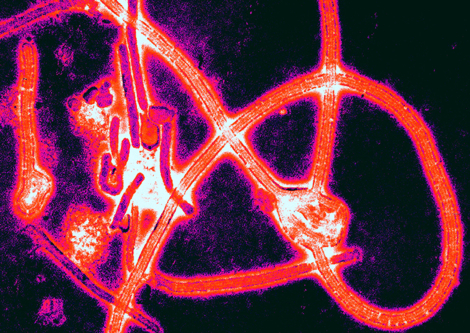 In late 2008, domestic pigs from several different farms in the Philippines died of an unknown disease. Tissue samples from the dead pigs were sent to the Plum Island Animal Disease Center on New York’s Long Island. Microbiologists there detected a virus never before seen in pigs – Ebola Reston, a close cousin to the Ebola viruses that have plagued Africa in recent decades.

Ebola viruses are known to infect wildlife species, such as macaques and bats, but the recent outbreak in Philippines pigs marks the first time an Ebola strain has been identified in livestock. At least six humans have tested positive for Ebola Reston in the Philippines since early 2009, all farmhands working in close proximity to sick pigs.

When a virus jumps to a new host, especially a domestic animal such as pigs, alarm bells go off because it can be more easily transmitted to humans than from a wild animal, according to Tom Geisbert, associate director of Boston University’s National Emerging Infectious Diseases Laboratories. Scientists are unsure which animal species is the reservoir for the virus – the original host from which Ebola jumps to other animal species or to humans. “There’s always going to be caution when we don’t know,” says Geisbert. As a precautionary measure, over 6,500 Philippines pigs have been slaughtered to date at farms where infected pigs were found.

Because the transmission of animal-borne diseases such as Ebola is poorly understood, scientists are scrambling to discover how viruses are passed from animals to people.

Though Ebola Reston has not caused illness in humans, a number of infectious viruses originating in animals have caused deadly disease outbreaks in humans in recent years, including SARS, Ebola Zaire and Avian Flu. On their websites, the World Health Organization and the Centers for Disease Control and Prevention deem Ebola Reston non-threatening to human health, as it has never made anyone sick, but some scientists believe this conclusion may be premature due to a lack of data. Reston is classified as a Level 4 Biohazard, as a precautionary measure – this label is usually only given to diseases that are fatal in humans and for which there is no vaccine or treatment.

The small number of human infections and subsequent studies on the rare virus suggest Reston may not be as pathogenic, or deadly to humans as other forms of Ebola, but Geisbert says, “there are too many questions and not enough answers to jump in and say that it isn’t. I wouldn’t want to stick myself with it.”

Though Ebola Reston has only ever caused mild flu-like symptoms in one patient, Geisbert says it is hard to extrapolate from such a small number of cases to say with certainty the disease is not a threat to public health. According to Geisbert, it’s hard to know that the few infected people were not just lucky or that the disease may not in fact have a very low mortality rate.

A better understanding of virus-host interactions is essential to preventing future outbreaks, according to Paul Bates, a microbiologist at the University of Pennsylvania School of Medicine. Bates speculates that a virus’ potency has to do with genetic mutations the virus incurs as it replicates itself in the host, but also with the intensity of the body’s immune system response to the viral invasion. According to Bates, some viruses, such as the highly lethal Ebola Zaire strain overwhelm the immune system, creating a “perfect storm scenario” in which “lots of cells go around killing things,” working up the immune system even more. Other strains, such as Ebola Reston, elicit a more controlled immune system response.

Because viruses replicate so rapidly, there are constantly mistakes, or mutations, in the replicated copies. These mutations in the genetic code have been shown to drastically alter the potency of a virus, according to Heinz Feldmann, chief officer at the National Institutes of Health Laboratory of Virology. “This doesn’t mean that this is very likely, but you can also not exclude that mutations could result in a more virulent [strain],” Feldmann wrote in an email.

Ebola Reston, the inspiration for Richard Preston’s 1994 non-fiction bio-thriller The Hot Zone, causes severe bleeding, organ failure and death in infected animals. But these animals are only incidental hosts for the virus – mortality is far too high in these species for the virus to persist here for too long, since they haven’t evolved antibodies to kill the virus. Bats may be a reservoir for Ebola viruses, says Geisbert of Boston University, because they carry antibodies against the disease and do not show symptoms.

Large gaps exist in the scientific knowledge of how deadly viruses jump species and why outbreaks of animal-transmitted diseases such as Ebola have seemed to occur with increasing frequency over the last 30 years. Tom Geisbert suspects these viruses have actually been around for a long time, previously undiagnosed in human and animal populations. As humans encroach on the rainforest, we’re more likely to come in contact with these viruses, he says, “but one of the biggest reasons we’re seeing more is that we now know what to look for. We are out looking for these viruses.”

Disease Protection – from the gut.

Why is there no vaccine for HIV?

challenge must itself be fablsfiaile.The physical assumptions of the State are then consulted in all policies and jurisprudential decisions. The Council itself, if consulted directly, may say “this will happen if you do / don’t do X” or “if you want us to study Q then we need $y million”. However the Council may not itself suggest policy, let alone give orders or levy taxes.This maintains representative government; while keeping the masses from instituting something popular and stupid, like creationism. Civil servants and policy-making humbug-mongers get an outlet for their primate urge for status, but it’s channeled into a separate track than the popularity contest of politics. Stupidities beloved of the Left, like carbon credits or race quotas, are subject to challenge from elected officials; but a rule is in place to prevent bogus challenges from a non-scientific background.And MM, hope you and yours get well soon.