Scientists are researching ways to use a “gene knockout” technique known as RNA interference to help fight HIV. 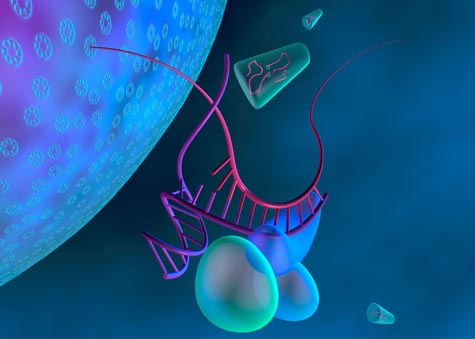 Researchers are looking into using a kind of RNA for treatment against the HIV virus. Shown here,
balloon-like proteins unzip the RNA molecule designed to fight HIV (purple), which then binds to RNA
strand from the HIV virus (magenta). Later, the virus's RNA will be destroyed (Credit: Kenneth Eward).

Infectious disease is war on a cellular level. On one side, you have the pathogen—the disease-causing agent—with a variety of strategic plans of attack. It can arrive ready for battle, expressing toxins that destroy your tissues. Or, like a Trojan horse, it can stealthily find its way inside your cells and lay dormant, only to strike when you least expect, multiplying rapidly and bursting out of the walled enclosure to spread to other parts of the body. On the other side of the fight, you have your immune system. It is skilled at recognizing invaders, it alerts your body to the onslaught, it sends out troops to surround and destroy the enemy.

But sometimes, the immune system is not enough. Despite your body’s best efforts, the pathogen outmaneuvers your protective responses and persists. And sometimes it targets the very cells that fight for your body, the immune cells, as is the case with HIV, or human immunodeficiency virus. The virus dismantles your defenses. However, scientists have developed a molecular weapon that could theoretically disarm all infectious diseases, including diseases that impair the immune system. That weapon is called RNA interference (RNAi). Recently, researchers were able to use this tactic to suppress HIV infection in mice. While it may be years before this specific technique is used to treat HIV in humans, it may add to the arsenal available to fight the disease in the future.

RNAi “turns off” genes in the cell, and is thought to have evolved as a defense against viruses. The process is quite complex, and to understand it, you first need to know a few details about the molecular machinery that is at work inside each of your cells. Programming instructions for all your cell’s components—mainly proteins—are contained in small molecules called DNA. DNA is actually composed of two strands of molecules linked together, and so it is said to be “double-stranded.” But before DNA can direct the protein building, its instructions must be copied into a similar molecule called messenger RNA, or mRNA, which is single-stranded. Viruses can commandeer this process and use it to make viral mRNA, which is used as a blueprint for viral proteins.

RNAi works by destroying these viral mRNAs before their message is used to make proteins. You can think of RNAi as a military squad, a small group of troops with a specific task. In this case, the soldiers are molecules that have different duties. The key trigger for RNAi is the presence of double-stranded RNA. This type of RNA is not often found in the cell, but it can be produced when a virus is making copies of itself.

Biologists have found a way to tap into this natural defense mechanism. If scientists introduce specific small interfering RNA molecules that can pair up with viral mRNA, they can destroy the viral coding message because they recruit the same proteins needed to form the large complex mentioned earlier. Just like synthetic drugs can take part in biological reactions inside your body, man-made small interfering RNAs are treated like the naturally occurring small RNAs in your cells and would be used for RNAi. This technique gives researchers a way to “silence” genes—either those of the host cell or of the virus.

Ever since scientists were first able to turn off genes in worms just ten years ago, they have seen the potential for this method to treat diseases.

“You can potentially target any mRNA molecule,” says Priti Kumar, an assistant professor of infectious disease at Yale School of Medicine who researchers RNAi treatments for HIV. Thus, this technique could theoretically treat any disease that is caused, at some level, by mRNA, she adds.

Researchers are studying the ability of RNAi to combat infectious diseases such as HIV, hepatitis C, pandemic flu and respiratory syncytial virus (RSV), which causes respiratory illness. And several RNAi-based therapeutics have reached clinical trials for treating diseases like RSV and hepatitis B, as well as a few non-infectious diseases, including cancer and macular degeneration, which causes blindness.

A new HIV treatment is particularly desirable because this viral disease has caused a global epidemic that has killed more than 25 million people since 1981, according to the World Health Organization. There is also no cure for HIV and current treatments involve complicated and expensive drug regimens.

HIV, a virus made up of RNA, has a few immunologic tricks up its sleeve that make it hard for the body to fend off. After entering cells, it briefly replicates before integrating itself into the host cell’s DNA. Here, the virus is safe from any immune attack and it can remain hidden within the cell’s chromosomes for years. But once it is re-activated it infects immune cells, such as T cells, and when too many of these cells are destroyed, the body cannot properly fight off other infections.

“When you have no more T cells to control other microorganisms, even simple sicknesses, like cold and fever can become life threatening,” Kumar says.

Kumar and her group are trying to fight this RNA virus with RNAi. Their strategy targets two viral genes and one human gene. Since HIV can easily mutate, the researchers designed their small interfering RNAs to destroy parts of the virus that do not often change—the genes that help the virus replicate. The scientists also targeted the human gene for a protein that is on the surface of T cells, a receptor that HIV uses as a doorway to enter the T cells. Eliminating this receptor will stop HIV from spreading to uninfected cells because the virus has no way to gain entry, says Kumar.

Before the researchers could test their therapy on mice, they were faced with another problem that is inherent to studying HIV. The HIV virus only infects humans, so scientists have trouble coming up with a sufficient animal model. To test HIV in chimpanzees, scientists use a similar virus, called Simian Immunodeficiency Virus, or SIV. But to study how the virus interacts with human immune cells, the researches made what they call a “humanized mouse.” The scientists had manipulated this mouse’s DNA so that it did not have its own immune system. The scientists then transfered human stem cells—cells that have the ability to become any type of cell in the body—into the mouse. When these cells mature, they take on different functions and form an entirely new immune system in the mouse.

“Essentially you’ve got a surrogate model that has human immune cells,” says Kumar.

The researchers then infected these mice with HIV and tried out their new RNAi treatment. If the mice were left alone, and not given therapy, their T cell levels dropped dramatically, meaning that their immune systems had succumbed to the virus. But if the mice were injected with RNAi therapeutics, they did not lose T cells, indicating that this therapy was able to stop the spread of the virus and suppress the HIV infection. The researchers published their results in an August 2008 issue of the journal Cell.

If RNAi was ever developed into a treatment for HIV, one major advantage would be that it would be fairly easy to make new small interfering RNAs if the virus mutated.

“We can change the RNAi [sequence] at will, so if the virus becomes resistant we just make a new one to a different gene within the virus,” says John Rossi, a professor at City of Hope in Duarte, Calif., who also studies RNAi methods to treat HIV. He notes that it is far easier to change small interfering RNAs than it is to change an HIV drug. “It takes 15 years to develop one of these small molecule drugs, and half billion to a billion dollars. [With] RNAi, you just put your pencil to a piece of paper and you can draw the new drug,” he says.

As for Kumar’s method, she stresses that an HIV treatment using her technique is “very far off,” around 10 to 20 years away. Right now, it is very expensive to make small interfering RNA, so the cost would need to be brought down before the treatment could be made available to a large number of people. For instance, treating one of Kumar’s mice costs about $100 per injection, but the equivalent treatment in humans would be in the hundred thousand dollar range. Also, the method needs to be made more efficient and tested in other animals before it can move to a human clinical trial, Kumar adds. These studies will help researchers make sure the treatment does not have any damaging side effects, which might occur if the small interfering RNAs target the wrong genes. And if it does become a therapy, Kumar thinks it will most likely be given along with other treatments. “It would be a great way to supplement existing methods,” she says.

Others feel that the future of RNAi therapeutics for HIV is still up in the air. “If you see something on the drawing board, or in a test tube, or even in simple animals, that could be great, but that doesn’t mean it’s something that we can do in humans—safely, and cost effectively,” says Jeffrey Nadler, the director of the therapeutics research program in the National Institutes of Health’s AIDS division.

While the RNAi treatment with small interfering RNAs is only transient—it needs to be delivered again and again to maintain its effect—it could still have an advantage over current HIV drug treatments. “We think that the [small interfering] RNA [can be given] at least once a week, or once a month maybe, as opposed to taking a pill everyday which is what HIV infected patients have to do,” says Rossi.

Given the current state of HIV treatment, Kumar thinks that all possible paths should be pursued. “Having any kind of a drug against a virus like HIV is a huge plus point because right now we are fazed at a crossroads as to where therapy for HIV is going,” she says.

An RNAi treatment would perhaps be most useful for HIV patients who already have full-blown infections, or who have a strain of the virus that has developed resistance to many chemical drugs, says Kumar. “Using [small interfering] RNAs at that stage would definitely give you a new lease on life.”

Why isn’t there a vaccine for HIV?

Interesting, targeted gene therapy certainly seems like the best treatment for viral diseases. It will be interesting to see how this develops and if it will be used for other types of viral infections.