One Small Step for Bioheat

Switching to greener heating fuel could take cities one giant leap away from fossil fuel dependence. 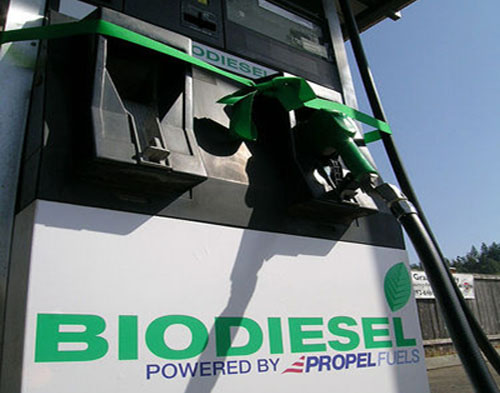 Biodiesel blends can be poured directly into existing boilers to heat buildings, cutting back on pollution and carbon emissions. [Credit: Rob E, flickr.com]

Things move slowly in Reepham, a small English town with two pubs and a few thousand residents. But hidden in the basements of some 30 houses are seeds of change that have transformed the quaint place into fertile ground for green technology. Swapping kerosene—a fossil heating oil—for cleaner-burning biodiesel, these households now keep warm with about half the carbon footprint they used to have.

The fuel switch is a one-year experiment orchestrated by the University of East Anglia and now more than halfway toward completion. Its goal is to prove that a blend of biodiesel and conventional heating oil, often called bioheat, can be poured directly into existing boilers, offering an easy way for consumers to reduce their dependence on fossil fuels.

“It’s a complete contrast to Reepham as a place, because [the town] is quite sleepy,” says Lisa Cook, head teacher at Reepham Primary School, where bioheat warmed the classrooms for about 200 children last winter. “I’m really enthusiastic about the project.”

Today, some 10 million households in the United Kingdom and the United States burn fossil heating oil, spewing large amounts of soot particles, sulfur and carbon dioxide into the air. Biodiesel is a cleaner alternative made from vegetables or waste cooking oil and animal fat. When used unblended, it reduces greenhouse gas emissions by more than 50 percent compared to normal diesel, according to the U.S. Environmental Protection Agency; for waste-based biodiesel, the number may climb to 85 percent. The exhaust is essentially free of sulfur, a major component of acid rain, and the amount of soot is almost halved.

While biodiesel is a well-known car fuel, only a tiny fraction of households use it for heating, says Bruce Tofield, a chemist at University of East Anglia’s Low Carbon Innovation Centre, who manages the experiment in Reepham. In the U.S., a few states offer tax incentives for bioheat, which, depending on market conditions, is only slightly more expensive than fossil heating oil. In contrast, the U.K. taxes the green alternative on a par with road fuel, making it almost twice as costly for British homeowners as kerosene, Cook says.

Impatient with what they saw as a lack of government action, Tofield and his colleagues came up with the Reepham experiment. “It was too important just to leave to governments and other authorities,” he says. “We had to make something happen.”

Tofield hopes the experiment will convince authorities that bioheat is a viable alternative to fossil fuels. He already has financial backing from the oil industry, which has been interested in non-fossil fuels since the U.K. recently tightened emission standards for new buildings. Without a greener fuel, people would have to look for other types of heating, thereby undermining the heating oil market.

Half a year into the testing, there have been no complications with the boilers and the heat has kept up, Tofield says. He is seconded by Cook, the head teacher: “We noticed absolutely no difference in terms of the efficiency.”

The fuel that goes into the boilers in Reepham is up to 50 percent biodiesel. Technicians had to change a few, cheap components in the older boilers because biodiesel dissolves rubber. But no modifications are necessary with B20—a blend of 20 percent biodiesel and 80 percent fossil fuel—says Brookhaven National Laboratory’s C. R. Krishna. A biodiesel expert, he led a study similar to the Reepham trial in upstate New York from 2003 to 2005. “We found precisely what they are saying, that biodiesel could be a drop-in replacement for heating oil.”

Cook is apprehensive about the future, though. During the experiment, the university pays the extra cost of the biodiesel, but from December 2009 Reepham will face market prices again. Although the British government is now discussing ways to make bioheat more economically attractive, “I couldn’t afford to pay twice as much as we currently do for oil,” Cook says.

Money is less of an issue in the U.S. For example, New York State has a tax credit of 20 cents per gallon of B20. And according to Tri-State Biodiesel in New York City, several dealers sell this blend at the same price as pure No. 2—a fossil fuel oil used in cars and boilers alike—making bioheat the cheaper alternative.

Still, bioheat has yet to gain a strong foothold in the U.S. market; in fact, the number of users is so small that, compared to the 7.7 million households that use conventional heating oil, it simply fails to show up in the U.S. Department of Energy’s surveys.

One of the biggest hurdles is scalability: Supplying biodiesel to a sizable portion of the approximately 3 million households that rely on heating oil in New York City is a very different beast from pouring it into a few dozen boilers in Reepham.

Waste-based biodiesel is unlikely to be available in sufficient quantities, for example, and some environmentalists worry that using large stretches of land to grow fuel crops could be unsustainable. Still, the chairman of the New York City Council’s Committee on Environmental Protection, James Gennaro, has been advocating bioheat for years, citing findings from the EPA and others that indicate a fuel switch would lead to net carbon reductions. The committee is currently negotiating a potential bioheat mandate for the city, called Intro 594 (read a detailed briefing here), but the specifics remain contentious.

Even if a bioheat mandate were to be introduced soon, suppliers would still need about a year to make the necessary infrastructure available, says John Maniscalco, executive vice president of the New York Oil Heating Association, which represents the city’s heating oil industry. Dealers would have to establish stable supplies and set up new tanks and injection systems. “It’s not quite as easy as it seems,” Maniscalco says. “Right now there is really not an adequate supply-distribution for bioheat within the city of New York.”

Yet on a smaller scale, Tri-State Biodiesel says it has plenty of product to sell and not enough buyers. This lack of interest probably reflects both low public awareness and the current financial turmoil, according to John Nettleton, who directs the Cornell Urban Scholars Program in New York City, an academic program working to improve living conditions in the city’s poorest neighborhoods. In an unstable economy, he says, people become averse to change. “They’re basically hunkering down and trying to deal with other costs like insurance and taxes.”

Nettleton has worked for several years to promote bioheat as a means to reduce the pollution in New York City. A large part of the city’s air pollution is due to oil-fired boilers, he says, and yet no more than a few thousand households use bioheat. “We really need to work on showing people that bioheat is a simple and efficient opportunity.”

Back in Reepham, Lisa Cook hopes she will able to continue using bioheat to keep her students warm in the future. “The children in particular are really enthusiastic about doing green things,” she says. “It’s an opportunity for us to be at the forefront of the new development.”

NOTE: The term Bioheat® has been trademarked by the National Biodiesel Board, a U.S. biodiesel trade association. In this article, we use bioheat generically to refer to a blend of biodiesel and conventional heating oil in accordance with common practice.

Hot-growing bacteria may be the key to the the next generation of biofuels.

Solar thermal energy may not get much hype, but don’t count it out of the renewable energy equation.