Swine Flu: the Good, the Bad and the Cute 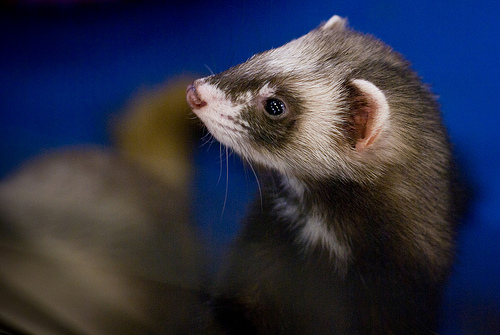 Ferrets are a good model for the human flu because their respiratory tract cells are susceptible to similar types of viruses. [Credit: Stacy Lynn Baum, flickr.com]

There’s good news and bad news on the swine flu front this week.

The bad news is that the novel H1N1 virus has a “biological advantage” over seasonal flu viruses, in terms of both infection and transmission according to the authors of a recent study. The good news? When the animals were co-infected with swine flu and seasonal flu viruses, H1N1 kept its genetic material to itself.

This eases fears that swine flu will reassort with other flu viruses to form a “superbug,” or a more virulent viral strain. Still, lead author, Daniel Perez of the University of Maryland, isn’t surprised that the pandemic virus has a leg up on the competition, “simply because it’s new, so hosts haven’t had a chance to build immunity yet,” he said in a statement.

The researchers used ferrets as a model for the human flu in their study, because ferret flu closely resembles the flu in people. The study is the first to look at how swine flu interacts with other forms of the seasonal influenza virus, according to the researchers. The ferrets were infected with one of three viruses: swine flu, the seasonal H1N1 virus (which differs from the swine flu virus), or another seasonal flu virus, H3N2. While ferrets in all three groups got sick, the ferrets with swine flu had a more severe illness, transmitted the disease more efficiently, and had higher levels of the virus inside their bodies. When the researchers co-infected ferrets with swine flu and a seasonal flu virus, only swine flu was passed to uninfected ferrets, indicating that, when it comes to transmission, H1N1 “out-competes” seasonal flu viruses.

The study was published in PLoS Currents: Influenza and funded by the National Institute of Allergy and Infectious Disease.

Rachel writes that the “bad news” is that pandemic flu H1N1 may have a “biological advantage” over seasonal flu viruses.

This may not be unmitigated bad news. If this pandemic flu strain “crowds out” seasonal H3N2, which is responsible for most of the flu deaths in elderly people (95% of those who die, on average, from “seasonal flu”), the pandemic may end up saving many lives over the next few years.

This is speculative, of course. It depends, among many other factors. After the pandemic ends (however bad — or not — that it gets during its course), the virus MAY become a seasonal flu virus, with a lower attack rate and less virulence, once most people have been exposed to it. So if the young and healthy develop some degree of immunity to it over the next couple years, and if the elderly continue to not be very susceptible to it, and if seasonal H3N2 disappears, the “average” number of flu deaths may have to be re-calculated downwards.

Pure speculation. Flu is famous for its surprises. But the assumption that pandemic H1N1’s “advantage” over seasonal flu strains is “bad news” is also speculation; there are grounds for speculating that it will turn out to have been good news, aftter the pandemic is over.

Genes included in the new swine flu have been circulating undetected in pigs for at least a decade, according to researchers who have sequenced the genomes of more than 50 samples of the virus.

The findings suggest that in the future, pig populations will need to be monitored more closely for emerging influenza viruses, reported a team led by Rebecca Garten of the federal Centers for Disease Control and Prevention in a report released by the journal Science.

Additionally, a simple action like brushing teeth following each and every meal could make a big difference in our immune system,I believe.