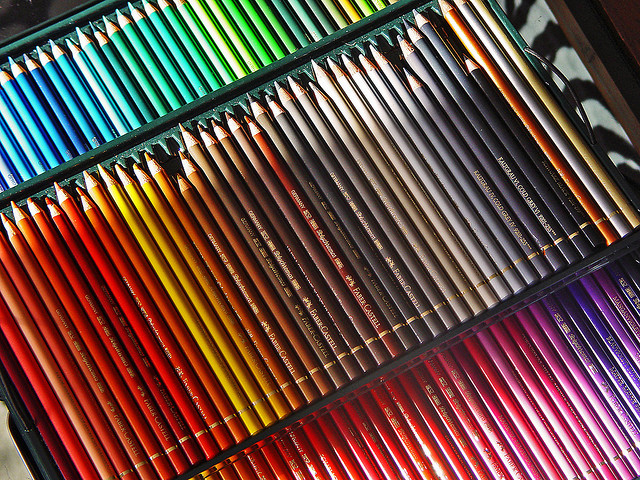 What was your favorite coloring method as a child? Messy finger paints? Magic markers with a tendency to bleed? Or were you a neat and precise colored pencil and crayon kind of kid?

I bet you never thought of that one while you were coloring in landscapes with purple mountain majesty.*

Arsenic sulfide (As2S3), or orpiment, is an incredibly soft mineral that produces a bright golden pigment. It was used to accent manuscripts long before ‘goldenrod’* crayons became popular. The arsenic/sulphur combination created the perfect hue for people throughout the ancient world to use for portraying gold, without actually using real gold. In Rome it adorned houses, in Ancient Egypt it decorated papyri, and in Ireland monks used it to decorate the Book of Kells-one of the most stunning manuscripts in the world.

Orpiment was so prized, that it became known as King’s Yellow in some places. It was a highly temperamental pigment to use in artwork, however, darkening any lead or copper-based colors that it came in contact with, loosening manuscript bindings, and not reacting well in oils-a big problem for renaissance painters. Despite its difficult nature, it was used into the 1800’s when the industrial revolution began churning out newer, cheaper colors that didn’t involve arsenic. Orpiment and its close, red–colored cousin realgar (As4S4) tend to be found near areas with moderate geothermal activity. In China they were viewed as female and male components of the same ‘element’, and were used in medicine and alchemy. Orpiment supposedly cured a variety of ailments, including baldness, snake and insect bites, ulcers, obesity, epilepsy, stomach pains, leaky bladders and senility. How widely spread these beliefs were, I’m not sure, but apparently there is some documentation of these treatments dating to around the second century AD.** Realgar was also incredibly popular as a medical ingredient, especially in its ability to get rid of poisons ant parasites. It was used as a pigment less frequently than orpiment, but more commonly was used in sculptures, and rarely, as an ingredient in fireworks to produce a white color.

Both orpiment and realgar  have crystal forms, but they do break down easily, even when exposed to something as normal as sunlight. High irony indeed for a pigment that would be just perfect for coloring a bright, golden sun.

*Anyone that ever owned one of those boxes of crayons with 96 colors and a built in sharpener… I’m talking to you.

** For more information, and if you can get access, read Edward Schafer’s Orpiment and Realgar in Chinese Technology and Tradition. It’s surprisingly fun.

Fascinating piece! I enjoyed reading about the historical and cultural significance of these colors, as well as the chemistry behind them.

“Thank you for sharing such a nice blog on waxy colors it will really help me out in future.
I have bookmarked this page for future references. Thet should be nontoxic.
Have a good one ahead!!
“