The virtual future of biomedical research 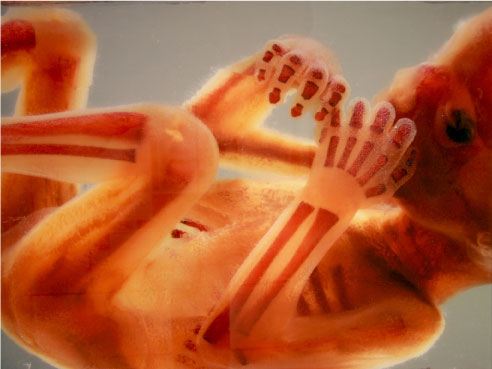 Dead End on the NIH Roadmap for Medical Research?

Thomas Knudsen carefully poisons a 3-week-old human embryo with a dose of isoretinoin. Isoretinoin, more commonly known as the acne medication Accutane, is highly toxic, a known cause of birth defects. It prevents vitamin A from signaling to the brain that it’s time for the limbs to start growing. Babies exposed to it during a critical time in development are born with shortened arms and legs. Knudsen is learning about the process by deliberately exposing the tiny fetus to the toxin. But he’s no madman. The embryo lives in his computer: It’s part of the new Virtual Embryo Project backed by the Environmental Protection Agency (EPA).

The EPA has identified 10,000 chemicals that may be dangerous both to human health and to the environment. To test their toxicity the traditional way, the EPA has to check the effects of different dosages on different parts of the body, at different times, in different ways. This means hundreds of thousands of data points that must be tested. And since you generally want to avoid exposing a human subject to a possible toxin, you have to use animals — lots of them. This takes an exorbitant amount of time and money. Using conventional methods, the EPA has so far only been able to test a fraction of the worrisome toxins.

But there are no such limits on virtual subjects. A computer can run vast numbers of tests quickly and cheaply. And it won’t get a rash or stop breathing when you infect it with something nasty. Another advantage is that using a computer model takes some of the guesswork out of testing, because it can modify one cell or gene at a time to pinpoint exactly where disease starts or birth defects set in. “We can introduce very specific lesions into the computer code and see what might happen to development,” says Knudsen.

Knudsen’s virtual embryo is one of many ongoing virtual human projects. In labs around the world, a virtual heart beats, a virtual liver filters virtual blood, and virtual lungs breathe. These computer models are used to study everything from vaccine development to cancer to environmental pollutants. “We’re trying to describe the body and how it interacts with its environment, whether it’s a toxicant or a disease,” says Richard Corley, a toxicologist at the Pacific Northwest National Laboratory in Richland, Washington. He and other virtual tissues scientists are working to make their creations as close as possible to the real thing.

But how close is close enough? Will we ever feel comfortable taking a drug or undergoing a treatment that was tested only on a computer?

Modeling the body is tricky. To build a true simulation — a living, breathing, digesting and excreting human — you have to understand everything about the biology within. Every gene. Every chemical reaction. Every action of every cell. Researchers doubt that this kind of model is even possible. “Imagine designing a vaccine for a newly emerging infection,” says Thomas Kepler, a computational biologist at Duke University. Some information you’d need, like the virus’ genetic code, simply couldn’t be known.

And to complicate matters further, even cells we understand often act in unpredictable ways in new environments. Most researchers think that as a result, experiments on computer models will never totally replace physical experiments like cell cultures and animal testing.

So a world without Petri dishes and lab rats is not likely in the foreseeable future. But virtual tissues technology still holds a wealth of possibilities.

The exciting thing is that virtual models don’t have to be perfect before the results are useful. The virtual embryo team is focusing on building models of a few well-understood developmental processes that are known to be sensitive to environmental chemicals: those of the eyes, limbs, and blood vessels. Then the team will expose the growing body parts of the virtual embryo to the 10,000 chemicals in question, in every possible combination of dose and timing.

The model won’t be perfect, but researchers think it will be good enough to give them a reasonable idea of which chemicals are the most dangerous. “Then we can prioritize,” says Knudsen, “and figure out which are the 10 or 20 chemicals, for example, we should be focusing on.” Precious resources can be allocated to further physical experiments on those. Knudsen speculates that this approach will become widespread enough that we could see reductions in animal testing within five years, though he cautions that pinning down a time frame is tough.

In some cases, virtual tests can step in when physical tests aren’t possible. Age-related macular degeneration is the leading cause of adult blindness in the developed world; about 20 percent of elderly Americans suffer from it, says James Glazier, director of the Biocomplexity Institute at Indiana University. There’s no good therapy for the disease, and Glazier says that computational models have pointed out the reason: We’ve misidentified what causes it. There is no animal that gets the disease, so you can’t use animal testing to learn about it, and obviously, you can’t give a human subject the disease to see how it develops. Without simulation, says Glazier, researchers probably would still be on the wrong track.

Many thought that it was genomics that would solve these kinds of problems. But when the Human Genome Project was completed in 2003, science found itself with more data, but also more questions. Researchers who work with virtual tissues aren’t surprised. “Genomics by itself doesn’t tell you anything about how organisms behave,” says Glazier. “It’s just a parts list. You can no more understand how a car is driven from a list of its parts than you can understand how an organism works from a list of its genes.”

When researchers started creating virtual models, they began to realize that it wasn’t enough to know all the parts in question: they had to know how they worked together too. Many of these properties are not understood. “There are certain molecules in the cell that control how the cell behaves: how sticky it is, how fast it moves, how it pulls on things,” says Glazier. “There has been surprisingly little work in understanding what controls these molecules.” He thinks this quality, called “adhesion,” plays important roles in the development of birth defects like spina bifida, the progress of some cancers, and the process of aging.

“People are finally realizing that mapping the human genome wasn’t the end; it was the beginning,” says Corley.

In the ways it will change — and is already changing — the field of biomedical research, the development of virtual tissues probably isn’t revolutionary. But it is evolutionary. It will help create better-designed experiments, and it will allow them to be run more quickly, cheaply, and with better control. “I think in 10 or 15 years, simulations will be used the way all other experimental techniques are used,” says Glazier. “They’re just one more part of the biomedical toolkit.”

THIS IS A EMBRYO DEVELOPMENT BY ANY CHRONIC EXPOSURE TO ANY CHEMICAL AND TOXICANTS, ITS DIRECTLY PENETRATE TO PLACENTA THROUGH BLOOD BARRIER.

Um, yes Jaswant. We know this, and so does the researcher in the article. Why are you yelling? The article is clear that the research is using a computer model, not a real human embryo, so any ethical concerns are negated. I’m glad for this scientific endeavor so that the sensibilities of those opposed to progressive research using human tissues are not offended. We would all like to reduce/eliminate profound birth defects. Kudos to the scientists involved.