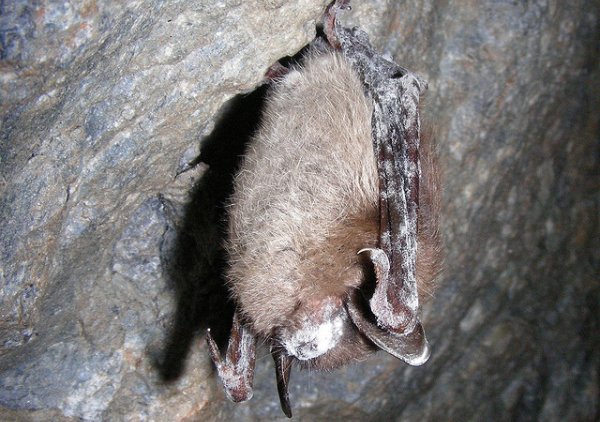 Flying Under the Influence

A 2.5-foot Malayan flying fox named Camilla clung to Rob Mies’ wrist, stretching for a chunk of melon. Mies remained calm, undeterred from communicating his dire message. Bat species are in decline all over the world, but the greatest crisis is occurring here in North America, he said at a recent talk at the American Museum of Natural History.

“White-nose syndrome is causing such catastrophic mortality that it may be the worst wildlife catastrophe in the last hundred years,” said Mies, who is director of the Organization for Bat Conservation. A deadly fungus that has been in the United States for only five years, white-nose syndrome has already killed more than a million bats. One of the most affected species is the little brown bat, a mouse-sized bat that often roosts in suburban attics. Because of white-nose syndrome, Mies said, the “little brown bat could go from one of the most common mammalian species in North America, to one of the least common, if not extinct.”

The aptly named fungus, Geomyces destructans, prefers cold environments like the caves where bats hibernate. Infected bats have white, mold-like growths coating their noses and wings. The fungus causes hibernating bats to wake up four to seven times more often than normal, and the extra movement burns their stores of body fat. With no food available until spring, infected bats starve to death.

G. destructans was first recorded five years ago, in upstate New York’s Schoharie County, although Mies estimates that it arrived in the United States a few years earlier. “[The fungus] is most likely from Europe, either transferred here on someone’s boots or gear, or possibly even by a bat stowed away in a crate,” he explained.

Spreading with unrelenting speed, the fungus is now present in 18 states and four Canadian provinces. Newly infected sites are quarantined to prevent cavers from spreading the fungus. Cavers are also asked to decontaminate their gear after visiting an infected county. Current research is trying to figure out how the fungus disturbs hibernation, in addition to testing preventative measures to stop it from spreading.

Camilla has a dog-like face and a wingspan close to five feet — she is the world’s largest species of bat. Mies gives educational talks across the country, and he brought three additional species with him for the bat encounter: a straw-colored flying fox, a Rodriguez fruit bat, and a little brown bat.

As the little brown bat gnawed on a mealworm, Mies explained that all species of North American bats are insectivores — bug eaters. According to Mies, one bat can eat 2,000 to 6,000 insects in a single evening.

A study published in Science earlier this year examined the economic value of bats to the U.S. agricultural industry. Zoologist Justin Boyles of the University of Pretoria, South Africa, and his team concluded that bats save U.S. farmers over 3.7 billion dollars each year in avoided insect damage to crops. If white-nose syndrome decimates bat populations, American-grown food will cost more to produce.

As the bat encounter ended, Mies fielded questions from the audience while Camilla licked her melon. Mies made a point to include information about white-nose syndrome in his presentations, and his audiences are eager to learn what they can do to help. Mies said that the best way to help bats is to protect them from the many other risks they face, including habitat destruction, pesticides and human persecution. “The few bats that are left are going to be crucial to repopulate,” he said, “and I think the average person can do a lot.” Simple actions like installing bat houses or humanely evicting bats from buildings can help local bats survive. Mies also urged his audiences to educate others about how bats help us, and how we can help them. By dispelling the myth that bats are scary creatures, everyone can help save these strange and charismatic animals.