The chronology of chronobiology, courtesy of hamsters 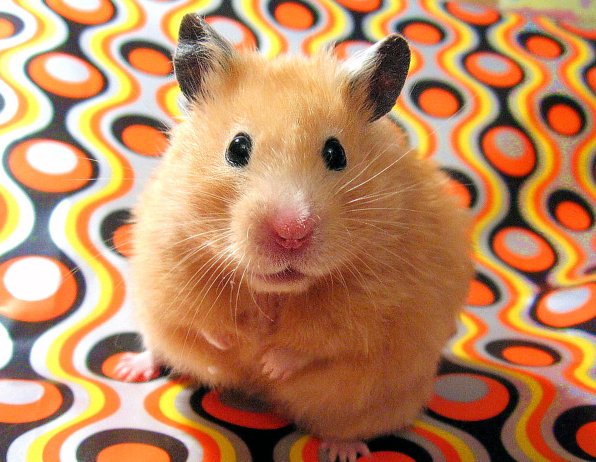 This Syrian hamster, named Chmurka, is likely descended from captives of a 1930 hamster hunt. [Image credit: Klara Salamonska via Flickr]

How Does Your Brain Keep Track of Time?

As you read this sentence you are traveling into the future. Read it again, and it is now a future “now.” Trippy, right?

The arrow of time constrains all we are and all we do, yet we struggle to understand what time actually is. Scientists have long believed all life on earth must contain a 24-hour “clock.” But where is it, and how does it work? What drives the ebb and flow of activity that is characteristic of all living things?

The established dogma is that DNA cycles — oscillating positive and negative feedback loops of gene transcription — are the master timekeepers of all life on earth. But this past winter, two papers in the journal Nature challenged the way biologists think about time.

The research, which found daily rhythms in biological systems absent DNA (red blood cells) or with DNA shut off (a kind of algae), could lead to new treatments for out-of-whack biological clocks in people. “A big problem with drug development targeting sleep and jetlag is that previously we were locked in a model with genes involved,” says lead investigator on both studies Akilesh Reddy, of the University of Cambridge in the U.K. “Genes are hard to manipulate with drugs, and gene therapy has been a rip roaring non-success,” he adds.

Reddy’s research suggests that cycles in a particular antioxidant “housekeeping” enzyme found in everything from mold to marigolds to man, peroxiredoxin, might be the primitive basis of circadian rhythms, our natural body clocks. If this proves true, there are wide-reaching implications for pharmaceutical development, as Reddy’s work points to “a new target we’ve never had before, a target you can actually make a drug against,” he says.

But how did we get to this turning point? Biological research flies along so quickly; what appears as a long-standing DNA-based dogma in circadian research turns out to be a theory less than two decades old. And the ancient foundations of the field, merely two generations behind us, are already stuff of laboratory legend.

“How marvelous are thy works, O Lord!”

Who would have guessed that the study of biological time was made possible by the lowly laboratory hamster?

Zoologist Israel Aharoni first captured the wild hamsters ultimately used in circadian rhythm research in 1930. He was searching for an animal that would breed easily in the laboratory. Legend has it that, appeased with promises of exotic butterfly specimens, a local Syrian Sultan permitted entire fields of crops to be uprooted in search of the elusive rodent quarry. Eight feet underground, at last, a nest. Yet, brought into the daylight, the disturbed mother began devouring her babies, and was quickly dispatched in a jar of cyanide. Ten weanlings, their eyes still closed, survived to be nursed and nurtured by Aharoni and his wife. Six later chewed through their wooden cage and escaped. Upon successfully breeding the remaining four wild siblings to each other, Aharoni wrote:

“Only someone who has tasted true happiness, heavenly joy, can appreciate our elation… From now on there will be a species of hamster that will be fruitful and multiply even in captivity, and will be convenient for laboratory experimentation. How marvelous are thy works, O Lord!”

Many molecular biologists would concur. This first litter of Syrian golden hamsters, inbred from the remaining captives of the hamster hunt, is the founding population of modern laboratory hamsters. Able to reproduce at only three weeks old, with a gestation time of 16 days, today’s hamster is separated by 700 or so generations from its wild primeval mother, drowned in poison. Hundreds of generations have informed research on the biology of time since the early 1960s; even the latest Nature study of clocks in mouse skin cells stands on the shoulders of hamsters.

This is because hamsters have extremely precise clocks. Anyone who has owned a hamster knows they are strictly, maddeningly, nocturnal. They dutifully run on their squeak-prone wheels for exactly twelve hours, and then sleep as soundly as fat furry sultans for twelve more. They are only about six inches in length, yet happily run about six miles per day.

The precision of the hamster’s daily locomotor cycle, a serendipitous discovery Aharoni did not live to see, makes them ideal subjects for circadian research. In fact, the original experimental set-ups, created in the 1960s, hooked a stylus to the hamster wheel to draw a line on a slowly moving paper roll each time the hamster made its wheel go round. Put a normal hamster on a wheel, the resulting read-out will look like a block of closely spaced lines, almost a bar of black indicating 12 hours of activity, then nothing, then squeak/line, squeak/line, and he’s at it again 12 hours later.

Aharoni’s inbreeding (by necessity) of four wild hamsters in 1930 led an MIT graduate student named Michael Murphy to be frustrated that all his hamsters were inbred freaks, and to reprise the hamster hunt in 1971. Had Murphy not worried about inbreeding, there would not be enough diversity to study the time-related genes governing hamster behavior.

Yet perhaps because laboratory hamsters trace their origins to a mating between siblings, there was a higher likelihood of genetic mutants. A graduate student named Martin Ralph noticed a spontaneous mutation, which he called “tau,” that caused a single male hamster in his colony at the University of Oregon to sleep and run, sleep and run, in 11-hour blocks, as though he lived on a planet with 22 hours in a day. In 1989 Ralph described his finding in the journal Science, in a paper titled “A Mutation of the Circadian System in Golden Hamsters.”

Murphy’s 1971 addition to the hamster breeding stock “is what enabled us to clone the tau gene,” says neuroscientist Joseph Takahashi of the University of Texas Southwestern, who has studied the genetics of circadian rhythms since the 1980s. Takahashi characterized, or cloned, the tau gene in 2000. Three years prior, he had discovered the first gene known to govern biological time in mammals.

Takahashi did his seminal research in mice. Mice have relatively sloppy rhythms compared to hamsters. They run and nap and run some more throughout the night. But all the genes that make up a mouse are known. This is a powerful tool.

Using a technique called forward genetics, Takahashi randomly mutated DNA in fertilized eggs of mouse after mouse, and waited to find one grown-up animal that ran on its wheel as if the planet spun faster or slower. Out of hundreds of mutants, he found one (one!). Then he used all the glorious techniques in mouse genetics to prove that this one mouse’s behavior was the result of a single mutant gene. “That mouse had a 28 hour clock,” he says. He named the gene “clock.”

Meanwhile, other neuroscientists were discovering that there is a “master clock” in mammals that synchronizes the mind and the body. Deep inside the hamster’s wee brain, just above where the nerves from each eye cross on their way to the visual cortex, lies a structure called the suprachiasmatic nucleus, or SCN. Hamsters have one, so do mice, and so do we.

In a few short years, scientists hammered out the genes and pathways, finding DNA timekeepers in every cell, and showing that the master clock in the brain, the SCN, coordinates them all. Textbook graphics were carved in stone.

But in 2000 a Japanese scientist named Takao Kondo tickled a funny bacteria and found it had a simple little clock made up of just three proteins, and that the 24-hour non-genetic oscillation they produced could be replicated in a test tube. In 2002 Steve McKnight, also at University of Texas Southwestern, suggested [PDF] that perhaps DNA is just an extension of a more ancient protein-based system, like the grand old casing of a grandfather clock, which simply houses and amplifies miniature clockworks.

Can we reconcile all the tiny clocks?

And now back to the future: Following Nature’s announcement of novel non-DNA circadian rhythms, last January’s many “news” headlines read “Scientists Find the Tiny 24-Hour Clock in Every Living Thing.” Although some note that the headlines often glossed over the complexity of the studies, the work of Akilesh Reddy and colleagues show rhythms of activity in human red blood cells (which have no DNA to speak of) and in a dainty green algae (whose DNA can essentially be turned off) that persist without translation of genes.

“They are trying to establish that you can have a clock without [DNA],” says Joe Takahashi. “That result doesn’t say the other stuff is wrong,” he asserts, “I think in the end it is all going to fit together.”

Meanwhile, Reddy’s speculations on futuristic clock-resetting pills will require the efforts of pharmaceutical research, but he excitedly declares, “It could be quite neat.” Marvelous, even.

Correction: An earlier version of this article misstated the year in which Joe Takahashi cloned the tau gene. It was in 2000, not in 1997.

Madeleine Johnson received her B.A. in biology from the University of Pennsylvania and her Ph.D. in neurobiology from Columbia. She was most recently a postdoctoral fellow at the University of Texas Southwestern Medical Center. Her research has focused on the cellular basis of schizophrenia and drug addiction. When not using her brain to think about the brain, Madeleine can be found asking big questions and cobbling together grand scientific theories.