The good, the bad and the ugly microbes

How changes in the microbiome could impact eczema in kids 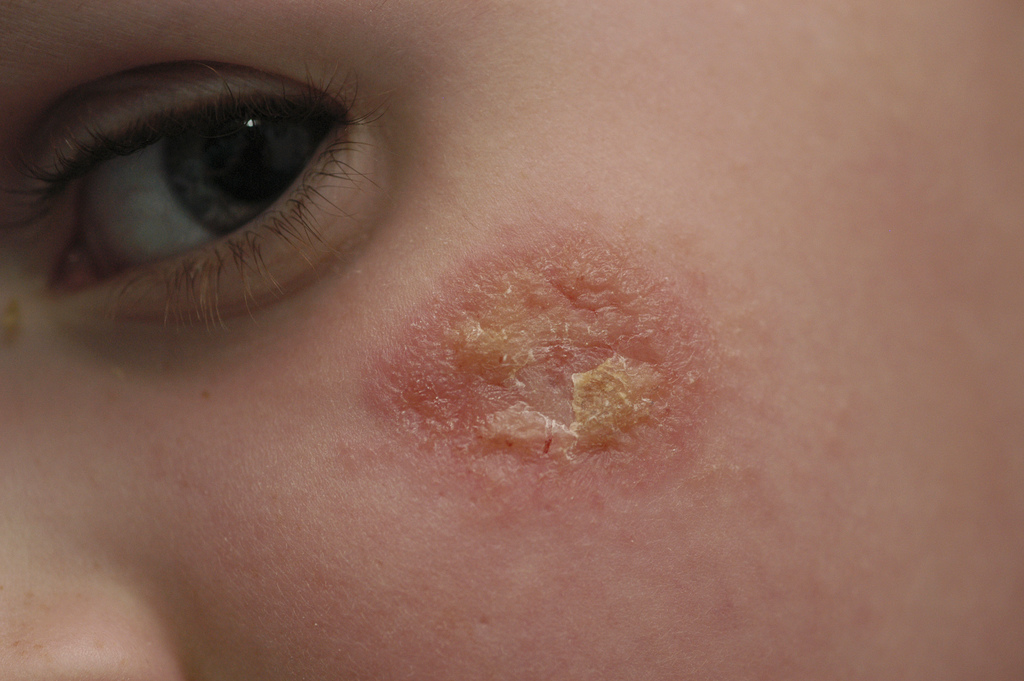 Why does skin complexion change with the seasons?

Evolutionary Hitchhikers Dwell Within Our Guts

When a young couple rushed into the emergency room at Bellevue Hospital with their wailing three-month-old baby boy, the on-call resident made a quick call to Dr. Mercedes Gonzalez, in dermatology. Little Huntley Machen had been brought in with an itchy eruption of angry, red rashes on his face and arms; neither child nor parents had slept in days.

Dr. Gonzalez remembers that when she walked in, she had to reassure the distraught parents that the baby has a very common infant condition: eczema. She explained that their baby probably had a subset of this disease, called “atopic dermatitis,” that usually brings allergies in its wake, and told them how special moisturizers with cortisone could work wonders overnight.

While she soothed the tearful parents, Gonzalez swiftly appraised the baby’s condition. Severe rash? Check. Under 5 years of age? Check. Never been treated with steroids? Check. This baby was perfect. He was going to be a participant in her eczema study.

Gonzalez is a pediatric skin specialist-in-training at New York University who has been seeing itchy babies for three years now. As part of her training program, she opted out of prescribing the same treatments over and over again, and instead is conducting a clinical study to delve into the roots of the disease. The cause for atopic dermatitis is fiercely debated; however, most scientists believe it is some combination of genetics, the immune system and allergens in the environment.

But Gonzalez thinks the cause may be due to changes in normally harmless skin-dwelling bacteria. These bacteria are part of the human “microbiome” — the innocuous microbial families that make their home in the human body.

Gonzalez’s hypothesis is that underlying biological changes are causing the skin microbiome to shift from benign to belligerent. To test this, she wants to pinpoint and map out any microbial differences reflected in eczema’s characteristic scaly rash compared to healthy skin.

This project comes at a time when atopic dermatitis is becoming a major childhood problem in the developed world. Up to 30 percent of American children develop the dry, angry lesions of eczema at birth, resulting in seven million doctor’s visits every year. A third of these kids will also grow up to be allergic to foods like nuts and milk, and may be severely asthmatic throughout their lives.

Atopic dermatitis’ ominous upswing is relatively recent; the disease and its associated allergies have tripled in just the last thirty years, according to physician Jon Hanifin, an international pediatric atopic dermatitis expert at Oregon Health Sciences University. The increase is apparent from a baseline study done in England in the late ’60s, Hanifin says.

The human microbiome is a swarm of bacterial communities that are permanent residents of the human body from the moment we are born. They set up shop deep in our bellies, in the nooks and crevices of our skin-folds, in the dark hollows of our throats and in the tiny gaps between our teeth.

From here, they persistently interact with our body cells, secreting protective chemicals and digesting tough molecules, continuously shaping how healthy we are as individuals. When external causes disrupt this cozy, beneficial interaction between our body and its microbial denizens, it leads to an imbalance between good and bad bacteria that we call disease.

“In our lab, we select certain skin diseases that have not been explained very well yet,” says Dr. Guillermo Perez Perez, the cheerful, bearded boss of the NYU laboratory. By comparing the skin of healthy people and eczema patients, he and his team “want to see if there are major differences in the human microbiome that may be associated with … disease,” he explains.

The “morphing microbiome” explanation is closely linked with a specific culprit: underlying mutations in children’s genes. One of these genes makes a protein called filaggrin that binds tightly to cells in the outermost layer of skin. A mutation in the filaggrin gene was found to predispose children to atopic dermatitis in 2006. These congenital mutations make their skin more susceptible to offensive bacteria.

Filaggrin helps to hold our insides in, by forming an impervious barrier of water-tight molecules. When the filaggrin gene is faulty, our thick skin becomes leaky.

“A defective inside-outside barrier allows ‘xenobiotes’ such as foreign chemicals, allergens or pathogens to get in,” says Peter Elias, a dermatologist at San Francisco Medical Center, who believes filaggrin is the missing piece of the eczema jigsaw.

Although the relationship between faulty filaggrin and eczema is not fully understood, scientists think the “leaky” barrier causes changes in our skin microbiome. Our skin surface is usually very acidic, making it a hospitable home for harmless skin bugs. But with mutant filaggrin, the skin becomes less acidic, explains Elias. So mutant filaggrin equals skin that “encourages the growth of more pathogenic flora,” says Elias.

From among a random sample of kids with atopic dermatitis, Dr. Hanifin says that about 37 percent will have the filaggrin mutation, according to a study his group published a couple of years ago. “The flag has been waving since 2006,” he says. “Filaggrin is the big one.”

In Gonzalez’s clinic too, kids have filaggrin mutations. When they come in with an unusually rebellious rash or a “flare,” they tend to have a sore throat or a runny nose from a concurrent bacterial infection. “We also know that antibiotics can help flares,” says Gonzalez. “So that means certain bacteria are intimately linked to the disease.”

Another indication of bacterial culpability is that kids with atopic dermatitis find their skin calmed by a homemade remedy: a warm diluted bleach bath. Physicians know that a half cup of bleach in a full bath works, while soap is too harsh. They suspect that it acts as a bactericide, killing unwanted bugs in the affected skin. “So I wanted to figure out what shifts in the microbiome are occurring during flares,” says Dr. Gonzalez. She also wanted to trace the changes that occur in the skin after a soothing bleach bath.

When Gonzalez finds a child that fits her criteria, like Huntley, the family sits down with her in one of the brightly-lit exam rooms at Bellevue Hospital’s pediatric dermatology clinic. The Machens had to answer a list of regular questions that any doctor would ask: “When did the child first develop atopic dermatitis?” “Has the child ever been diagnosed with other medical conditions?” “What pets does the child have at home?”

But then the questions start to hone in on specifics: “Which parts of the child’s skin are affected by eczema?” and “How severe is the itch today, on a scale of 0 to 10?”, or “In the last two weeks, has the child spent time in a swimming pool?”

Next, Gonzalez looks closely at the eczema and gives it a “how bad” score. To compare the bacteria flourishing in the scabs, she examines three spots with lesions and one clear spot for comparison.

Pulling on a pair of purple gloves, she deftly opens up a sterile applicator with a soft cotton tip and soaks it in a mild salt solution. She swabs for bacterial DNA in the four chosen sites and stores the applicators away carefully. The kids are then given a bottle with either bleach solution or water, to use twice a week. To make sure her results are unbiased, Gonzalez doesn’t know which bottle each participant received and does a “blind” analysis.

Each child is also given a soothing ointment to heal the itchy scabs.

Four weeks later, the child is back in the little room. A fresh grade is given, the same four spots are swabbed and the new DNA is stored in little vials that Gonzalez will later analyze.

So far, five healthy kids from Gonzelez’s clinic and five with eczema have been enrolled in the study, but Gonzalez envisions that 50 sick babies and 25 healthy ones will eventually form the complete cohort.

This technique is being used for this purpose in just one other lab in the United States, and “no one has looked at microbial changes before and after bleach bath treatment,” she says. So even if her results show no changes in bacteria, Gonzalez hopes to add some knowledge to the existing body of research.

“I’m looking for [changes in] the amount of total bacteria, but also several specific genera,” she says. Previous studies have shown Staphylococcus aureus a-plenty in eczema lesions, but Gonzalez is also combing for other “genera” or families, like Propionibacterium acnes, the bacteria that cause acne.

Gonzalez says that a notable difference in skin bacteria between healthy and eczema subjects was already seen last year, right here in the Perez Perez lab. In stark contrast to the copious amounts of Staph aureus found on eczema skin, members of the lab found no Staph aureus bacteria in a study done on healthy people’s skin. So chances of Gonzalez confirming this result are pretty high. “I think this is very important research,” says Peter Elias. “The information can provide the baseline data for potential therapies.”

As for baby Huntley, his mom Dusty says that she was happy that he was part of research that could help other kids. Huntley is now about ten months into Gonzalez’s study and seems to be on the mend. “In the hospital, it looked like he had surgical burns,” Dusty shudders. And in the time between their agitated visit and now, “the difference is night and day,” she says. Whether it was the cream or the bleach bath, things have changed. The Machens can finally sleep through the night.

My son was the same – at three his skin peaked and he was covered in severe “burns.” It was a very difficult time. We have since determined food allergies were causing his severe flare-ups. So, after removing the foods, we’re all happy to be sleeping much better at night.

I’m looking forward to seeing how this study turns out.

It’s a good news that everything is fine and there is hope when it comes to diseases like this. The research is a helpful thing to know the case of this illness and of course to help more kids with the same situation.