Prions, a type of misled protein, are not too dissimilar from double agents

The James Bonds and Jason Bournes of this world could stand to learn a thing or two from prions: they are the ultimate double agents in reconnaissance and sabotage of the biomedical domain. These cryptic, corrupt and convoluted proteins carry no genetic material, no unnecessary complications of identification. The sheer simplicity of prions makes them exceedingly difficult for a host immune system to seek out and incarcerate them as hostile agents. 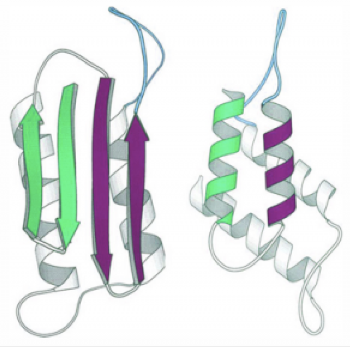 The prion microstructure on the left, the normal protein structure (with helix) on the right. [Image Credit: AJ Cann via Flickr]

All prions start out as a normal functioning protein inside a host organism: a human or another such mammal. At some point, though, they go rogue. A prion that has entered the host, possibly by the ingestion of dodgy food, will approach the normal protein. The protein is turned into a prion agent when another the prion binds to it. When a protein has been in contact with a prion, the protein microstructure becomes modified from the conventional spiral into a mis-folded sheet-like formation. The protein is now a prion; the conversion is complete.

Like good sleeper agents, the prion can lie dormant for a long period of time. The incubation period has been known to last as long as 50 or 60 years, affording time to establish a watertight cover story under its previous alias as a ‘normal protein’. The host immune system is all the while none the wiser to this deception.

This period of incubation is merely the calm before the storm. For once they break their own cover, the fury and extent of the prion inflicted host debilitation becomes evident. The prion’s weapon of choice in its war on the host? Degenerative brain diseases such as mad cow disease, kuru and possibly even Alzheimer’s disease.

Having turned sufficient numbers of host proteins into rogue prions, these subverted proteins congregate on the outside of cells within the central nervous system to form plaques. These structures cause disruption in the tissue makeup of the central nervous system organs, principally the brain. Since the currency of value in espionage is information, it comes as no surprise to learn that this is where the prion focuses its battle plan. A typical tactic in a prion’s attack is to instruct the plaques to make holes in the tissue, producing vacuole formation in host neurons, the information highway.

Despite the severity of what happens when a prion successfully infiltrates a host, prion attacks are rare. Which means that if you are unlucky enough to call yourself host to a prion, there is still limited knowledge of how to flush it out. Some success has been shown with using ‘sheet breakers’ to change the structure back to the pre-prion normal helix structure. That success has only been shown if the medicine is taken before symptoms set in. With an incubation period of months to decades – the chances of flushing out Prion Bond are pretty slim.

You say:
A prion that has entered the host, possibly by the ingestion of dodgy food, will approach the normal protein …

My understanding was that ingested proteins (and prions?) have to be broken down into their amino acid building blocks, and it is the amino acids that are absorbed, to be reassembled into host protein.

If that is indeed how alien proteins are converted into host protein, how does the prion get through the gut wall?

Thanks for reading my blog post and commenting. It is thought that prions enter a host by ingestion. However, you raise a good point and a good question. Unfortunately it seems that there is as yet not a full answer.

See this article: http://www.pnas.org/content/99/suppl.4/16378.full.pdf
From the bottom of the second page: “Somehow prions make their way from the digestive tract to the central nervous system (Fig. 2). The relative resistance of prion infectivity to protease digestion (43) probably allows a significant proportion of the infectious agent to survive passage through the digestive tract (36). It is not clear how prions pass through the intestinal mucosa”

clear as mud? I guess that just adds to the craftyness of the prion.

Interesting post, very much in my field of interest.

You might want to check out this (updated) presentation that I gave in Washington D.C. a few years ago:- http://www.slideshare.net/steelgraham/2007-cjdf-presentation-graham11-presentation

A key question I put to a panel of Prion experts was “Are Prions the cause or the symptoms of these diseases?” None of them were able to offer an answer to that one !!

Been learning about prions some lately. I tend to agree with Chris … if this is a protein, shouldn’t it get digested (broken down to amino acids) in the digestive system? And if not broken down should be excreted out of the system?

I think the only answer would be conditions such a leaky gut, where things make it into blood stream that normally wouldn’t/whole proteins instead of amino acids only. That is the only explanation I can think of.