Len Soucy has spent his life caring for injured birds 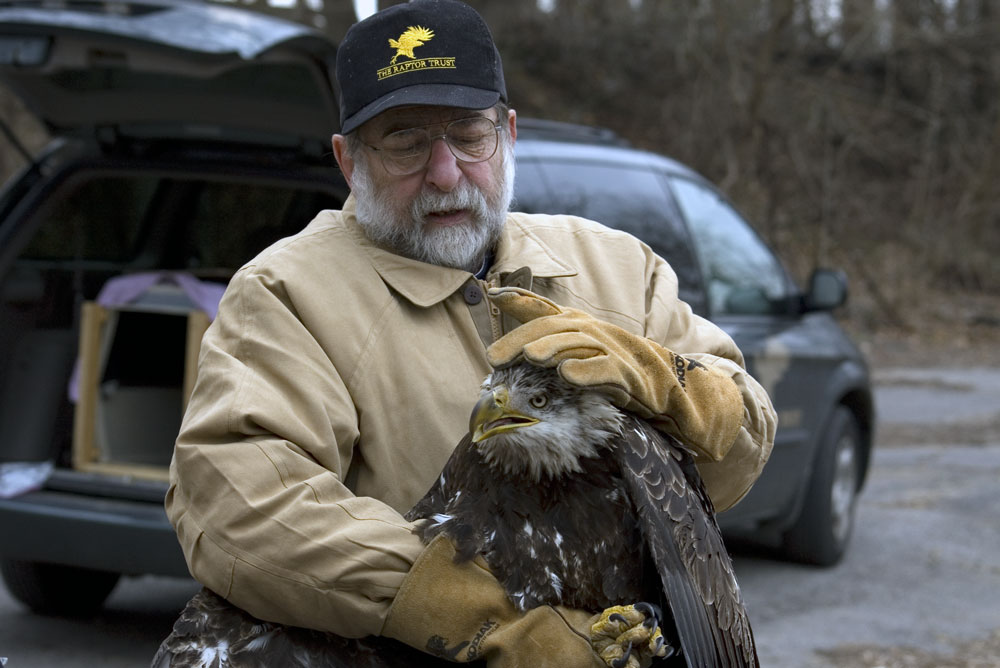 “I’m retiring or dying, one or the other. Maybe both,” says Len Soucy between doctor appointments. Founder of one of the largest wild bird rehabilitation centers in the United States, Soucy is in his 80s, and wears worn brown loafers and a crewneck sweatshirt decorated with images of owls and hawks. As he speaks, the glow from the living room fireplace reflects from his glasses.

Soucy’s house, a squat building with colored glass bottles in the windows and paintings of birds in the living room, sits at the edge of the Raptor Trust compound. It is located in Millington, N.J., on the border of the Great Swamp National Wildlife Refuge. Outside are about 70 small buildings built from wood and chain-link fencing that serve as aviaries. Caring for their inhabitants is Soucy’s lifework.

Soucy is “definitely a force of nature,” says Lauren Butcher, education director at the Raptor Trust. “This is a field that requires that kind of commitment…It’s not a job, it’s a way of life.”

“Whatever he expects out of you, he’ll do twice as hard himself,” says Marc Payne, who worked at the Raptor Trust for 12 years before launching an avian rehabilitation center in Freedom, Maine.

Soucy has been healing injured birds and returning them to the wild for over 40 years. He’s published nearly 100 scientific papers; earned awards from the Humane Society and U.S. Environmental Protection Agency, among others; and received a master bird-banding license from the U.S. Department of the Interior and an Honorary Doctor of Science degree from Drew University in Madison, N.J.

“Didn’t change my behavior a hell of a lot quite honestly, to be ‘Doctor,’” says Soucy. “But it’s kind of a nice thing to look back on. Some people in power… thought what we do is important.”

A number of aviaries at the Trust are devoted to birds too injured to survive in the wild. These enclosures are open to the public. For Soucy, educating people about raptors, which are predatory birds, is as important as rehabilitating these birds. But despite his passion for birds of prey, Soucy will care for any wild bird that needs his help. 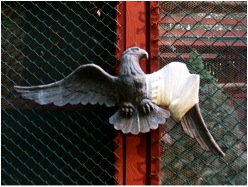 It is an all-consuming task. Soucy and his colleagues have cared for over 81,000 birds, with an intake of 3,500 to 4,000 annually. The Raptor Trust runs 365 days a year, and the flood of injured birds never lets up. “The word gets out,” says Soucy. “There’s a bunch of crazies down in a swamp and they take care of birds.”

Like many wildlife rehabilitation centers, it began as a backyard operation. Initially, Soucy and his wife Diane cared for the birds on their own until the workload became overwhelming. When they realized that they were treating 300 birds a year, they decided to become a nonprofit organization in 1982. Today the Trust runs on $700,000 a year in private donations. It has a full-time and part-time staff, as well as interns and nearly 100 volunteers.

Soucy never planned to rehabilitate wild animals. After graduating from high school in 1949, he became apprenticed to an engraver in Cedar Grove, N.J. Following a stretch in the army during the Korean War, Soucy met Diane in a bowling alley and continued to work as an engraver.

Says Payne, “He had a natural knack for using his hands,” a talent which suited Soucy well for engraving and, later, handling injured birds.

In 1964 Soucy visited Hawk Mountain Sanctuary in Kempton, Pa. Watching nearly 20,000 broad-winged hawks migrating, he recalls thinking, “oh my god, this is unbelievable.” From that moment, he was hooked on raptors.

At the time, few shared his appreciation. Before birds of prey were protected by the Migratory Bird Treaty Act in 1972, hunters could bring their kills’ feet to the state capital for a reward of 50 cents. “They were viewed as vermin,” Soucy says. Many raptor populations had crashed. For the Soucys, “getting a peregrine falcon in their early time here was like getting a unicorn,” says Butcher.

Soucy was determined to combat this anti-predator attitude by rehabilitating injured raptors and educating the public. “You may like bugs, you may like snakes, you may like hawks, you may hate all of them,” he says,  “but there’s a reason that they’re here, a biological reason. Not to please you.”

Unfortunately, no one at the time knew how to provide medical care for wild birds. “It was trial and error,” says Diane. “We were unsuccessful more times than we were successful.” 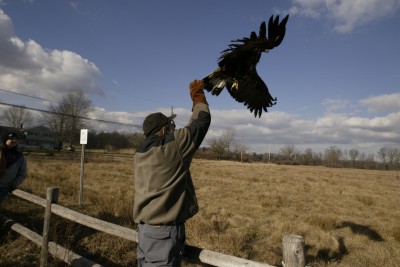 Gradually, they became more adept at caring for wounded birds. In his time at the Raptor Trust, Soucy has seen some bizarre injuries, including an owl stuck in the grill of a police cruiser. Occasionally, Soucy’s patients are birds he has met before. In 2010, he received a red-tailed hawk with an identification band on its leg that he had put there 27 years earlier, making it the second-oldest red-tailed hawk ever identified alive.

Today, many raptor populations have rebounded, and the Raptor Trust has grown in size. Still, money is tight. Last year, the Raptor Trust spent $7,000 just on mealworms (or as Soucy calls them, “little slithery suckers”) to feed their smaller birds. That is “probably enough mealworms to fill this room half full,” Soucy says. Requesting money for unglamorous resources like mealworms is a challenge.

Perhaps even more daunting, however, is the constant threat of burnout. Half of the birds the Raptor Trust treats die during treatment or have to be euthanized. Wildlife rehabilitators face a constant panorama of gruesome injury and death. “You deal with shit the best you can, that’s all,” says Soucy.

And after over forty years of wildlife rehabilitation, he is feeling the strain. “Look at me,” he says. “I’m shot now.”

But the work is not without compensations.

“I think the most rewarding part, obviously, is seeing a bird that was mangled all to hell put back together, and having the fun of going to let it go,” he says. “That’s a kick.”

Thank you for this. We are long-time bird owners and lovers. I am not sure how I would be able to handle the stress of seeing these birds injured. Heartbreaking, but for the ones that can make it, the work must be worth it.

This is a great work you’re involved in. You never know the impact your efforts will have on these great birds in the future. And great post!

Well glad to have found you !! Today I stopped by the local Library was reading an upcoming event article of “Encounters with Birds Of Prey” being presented by the Deleware Valley Raptor Center at our Warren County Library Hdqtrs. here in White Twp NJ May 19 at 7:00 pm. I then started thinking about you, Diane, Chris, my teenage years, our family visits and the wonderful work you were doing then 40 years ago. Here you all are, dedicating your lives to such a wonderful, rewarding, legacy for all. I saw you years ago on Sesame Street when my children were young (2 boys now 37 and 27) and was amazed then as I am now. I’m sorry for not having kept in touch all these years, how they have flown by, (mom always said they would) Once I had gotten married and moved away, and mom and dad moved away, so much was lost, officially made into history. I hope to come see your treasured sanctuary this summer with my 6 yr old grandson, and inspire him, as i was, to the amazement of nature’s Raptor Birds. Perhaps we will have an opportunity to meet again, my regards to Diane and Chris…. Your niece, Diane

Love you Len! I’m proud to know you! What a great story, thanks for helping people see the real side of wildlife rehab that we deal with daily!

Godspeed Len Soucy and thank you. I helped build a flight cage at the Raptor Trust in 1981, as a 15 year old Youth Conservation Corps member. Since then I have visited many times and brought my child so that she too can appreciate these magnificent birds. Your legacy will live forever.

Thank you Len. I will miss you. You made a difference.

Someone, (not me) needs to be writing about Len Soucy. He was incredble. Please start writing.

I became in awe of the work that he is doing and has done in the past when I watched a show on tv in Australia he is amazing.