Aubrey Shick is doing everything she can to finish work on Romibo, the first do-it-yourself autism therapy robot 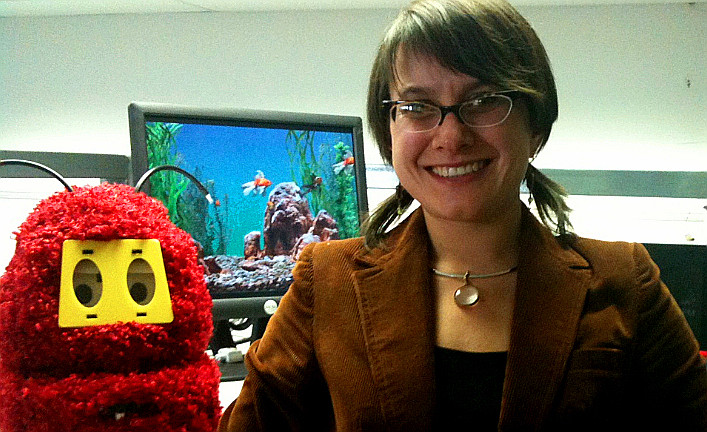 Aubrey and Romibo in one of its many furry skins [Image Credit: Aubrey Shick]

An alternative to autism?

Aubrey Shick has emailed me to say she is running late. I’m waiting for her in the lobby of a building on the campus of Carnegie Mellon University in Pittsburgh, Pa. where Shick did both her undergraduate and graduate studies, and where she is now employed. Suddenly she’s right next to me, smiling behind wing-tipped plastic frame glasses and looking younger than her 29 years. Shick leads me up to the fourth floor, to the solid gray door of her lab, adorned with a poster for the Romibo Robot Project bearing a cartoon image of Romibo, the autism therapy robot she invented.

Shick is the creative director of the Romibo Robot Project and CEO of Origami Robotics – two roles that for now exist in name only as she tries to get her project funded. To pay her bills, Shick works as a design researcher at the Quality of Life Technology Center at CMU. She is involved in many projects, including something she enigmatically calls “wearable computers.”

But Romibo is Shick’s real purpose for being here. She brushes the lab counter clear of robot pieces and places the Romibo prototype where I can get a good look at it. “I wanted it to happen this year but it didn’t work out. I didn’t have the manpower. I didn’t have the technical expertise.”

Shick was ambitious and bright even when she was growing up in central Pennsylvania. When Shick was 13 her mother went back to school to get her college degree, and Shick began reading from her mother’s psychology textbooks. That got Shick interested in doing research on the stroop effect – the delay in the reaction time in a color-naming task – while she was still in high school. For a state-wide science competition, Shick performed a three year, 300-person study that measured the stroop effect in different populations of kids at different ages. “I was very artistically inclined and interested in colors,” Shick says.

And even though Shick attended Carnegie Mellon for design, she has found her way to back to behavioral psychology. “When you’re designing something you’re trying to communicate how a person should interact with it,” Shick says. “You’re trying to speak to the psychology of that person. How do they understand things? How do they think about things?”

Romibo began as an ambitious graduate school project inspired by a design competition for technologies to help children with autism. Shick knew nothing about autism therapy then. “I just approached it as an alien going into a completely unknown world,” she says. Shick pored over the research literature showing that children with autism have an easier time interacting with robots than they do with people. One possible reason, experts say, is that people are unpredictable, which can be intimidating for an autistic child. A robot, on the other hand, can be programmed to behave the same way over and over again.

Covered with one of Shick’s custom made skins – something akin to a colorful, shag fur sweater – Romibo best resembles an 11-inch-tall furry gum drop with eyes and antennae. “We’re trying to get the early, early stage kids, and we don’t want to be overwhelming. We want to be playful, simple.” Ultimately Romibo will be used to help children with autism learn some of the skills they struggle with, including social interaction skills, emotion regulation, eye contact, gaze, and vocalizations.

Shick is not the first person to design a robot for autism therapy, but she is the first person to make a robot that is simple and cheap enough to manufacture as a “do-it-yourself” kit. Shick originally conceived of Romibo as a flat pack robot that could be assembled at home. After she graduated she applied for a grant and convinced the executive director of the Quality of Life Technology Center to hire her to work on the Romibo project. Shick brought in Garth Zeglin, a project scientist at CMU’s Robotics Institute, to make improvements on the Romibo design that would make it easier to manufacture. “The ultimate goal here is to make a machine that’s not one exact form, but is easy to manipulate to adapt for different subpopulations,” Zeglin says. “There still isn’t anything else like that in the therapy world.”

Shick would like to sell Romibo robots to research institutions to use in social robotics research. Already, six institutions have contacted her with interest in Romibo. She has had to tell them that the robot isn’t ready yet, and she’s not quite sure when it will be.

Shick’s biggest problem has been recruiting and keeping talented engineers and computer scientists to help her with the work. Whenever she has the money, she hires the people she needs for a little while, but soon it’s a one-woman show again. “I am definitely running this circus,” Shick tells me more than once. “The truth of the matter is I can’t run this company on my own.”

Shick hasn’t published anything on Romibo yet – her first priority is to complete the project. She is currently waiting to hear back about a grant that could be worth $200,000. With that money Shick could hire an engineer to finish tinkering with the Romibo design. The robot is still having trouble being mobile, and some adjustments have to be made so that the plastic pieces can be manufactured cheaply.

So Shick continues on, fueled by her own motivation, if nothing else. “This field in general, if you’re not passionate about it you’re probably not in it right now,” says Michael Knight, a software engineer with Interbots, a start-up looking to market its own robot, Popchilla, as a commercial autism therapy robot. “We’re attacking a problem that is both a hardware problem and a software problem, and she’s the type of person who is like, ‘No, this is important to me and this is the type of thing that I’m excited about.’”

After chatting for a few hours Shick has brought me to the Interbots office to interview Knight and his colleagues but also, apparently, to get rid of me. On the walk from the car to the office Shick looks worried. When she begs off sticking around to talk some more by saying she’s got to get back to work I believe her. I also wonder if, in her passionate retelling of the history of the Romibo project, she feels she’s said too much. But that passion is what inspired Romibo’s various collaborators to get involved in the first place, and it may very well be the thing that makes the project a success.

“This is her baby, this is really her dream,” Zeglin says. “Projects really live when there is someone who is a champion. She is the champion for Romibo.”

That is definitely the big “stretch” these con artists are selling.