And what to expect if your results are positive 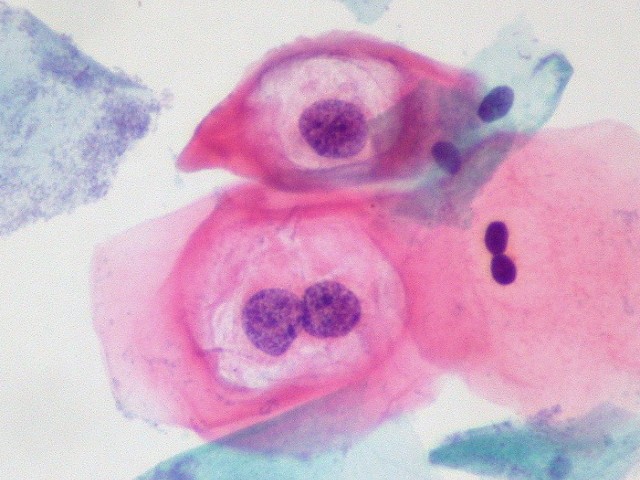 About a week after her annual pelvic exam, 22-year-old Julie* woke up to an unwelcome voicemail from her gynecologist’s office. “They said that I had abnormal results from the pap smear, that it was HPV positive and I needed to come in and talk about it,” she says. “My heart sank to my stomach.”

Human Papillomavirus (HPV) is the most common sexually transmitted infection in the U.S. About 80 percent of people will contract HPV after becoming sexually active, according to the Cleveland Clinic, and about 20 million people have it at any given time. Despite its prevalence, there is no cure for HPV, and the lack of clarity about treatment options leaves many women feeling anxious after receiving their diagnosis.

There are more than 100 different strains of HPV, 40 of which affect the genitals. Most people never realize they are infected because the virus generally doesn’t cause any immediate health problems. Some types of HPV can cause cells in the cervix to become abnormal, however, eventually leading to cancer. But while practically every woman will be exposed to HPV at some point in her life, cervical cancer is relatively rare, affecting only about 5 percent of women worldwide, says Jack Cuzick, a cancer researcher at Queen Mary, University of London.

According to the U.S. Preventive Services Task Force, women over 21 should have a pap smear (also called cytology) every three years to screen for cervical cancer. If the cells swabbed from the cervix during the pap smear appear abnormal, there are several ways for the doctor to proceed — some order a follow up pap smear, some schedule a biopsy to get a closer look at the cells, and others perform an HPV test, examining the cells on a molecular level for DNA from the cancer-causing virus.

So should you get an HPV test?

The USPSTF recommends that women over 30 undergo routine HPV testing, along with their pap smear, every five years. Dr. Cuzick believes that performing HPV tests on younger women, particularly those under age 25, is unnecessary. While young women tend to have more cellular abnormalities, he says, most of their infections disappear within six months.

Marc Arbyn, an epidemiologist at the Scientific Institute of Public Health in Belgium, agrees. “At the younger age, HPV infection is quite common and it almost always clears up by itself,” he says. “Whereas after 30, the proportion in which the virus persists is higher and the chance of clearance is lower.”

In spite of the USPSTF recommendations, some doctors choose to perform HPV tests on women under 30. Young women with positive HPV tests often don’t require any further action other than continued observation, but the test can be distressing, and frequently leads to recommendations for further procedures that can increase the patient’s medical expenses and require time off from work, Arbyn says.

For older women, however, HPV testing can be an efficient tool for determining how to proceed when a pap smear turns up abnormal cells, according to a 2013 review coauthored by Dr. Arbyn. If an HPV test comes back negative for precancerous cells, the American Cancer Society suggests that the woman return to routine screening. But if the abnormality persists for a year or longer, or if the test comes back positive for a potentially cancer-causing strain of HPV, the gynecologist will conduct a procedure known as a colposcopy to assess the likelihood that the abnormalities will progress to cervical cancer.

Your HPV test is positive. Should you have a colposcopy?

HPV tests are sensitive to cellular abnormalities, but they are less adept at determining the severity of the abnormality, and often return false positives, according to the USPSTF. As a result, colposcopies are over-prescribed — particularly for women under 30 who have received an HPV test.

The procedure is invasive, expensive and anxiety-provoking, Cuzick says, “So the intent is to focus that on women who actually really need it.” The price of a colposcopy can vary, but with additional fees, it usually comes to about $750. Although a quarter of a million women have colposcopies each year, Cuzick says, only 20 percent of them have significant cervical abnormalities.

But while occasionally unnecessary, colposcopies are essentially innocuous. Colposcopy just means “looking at the cervix with a magnification device,” Arbyn says.

Similar to a routine pelvic exam, the patient lies on a table with feet in stirrups, and the doctor inserts a speculum into the vagina and swabs the cervix with vinegar, which turns the abnormal patches white. The doctor then examines the area with “a low level magnifier,” Cuzick says. If the doctor can see that the cells are of a variety that could lead to cancer, he or she takes a one-millimeter sample of the tissue in a procedure known as a “punch biopsy.”

“The pain is pretty minimal,” says Cuzick. Dr. Stephanie Blank, an obstetrician and gynecologist at NYU Langone Medical Center, says the speculum is “uncomfortable,” but that the biopsy amounts to a “quick pinch,” though there can be irregular bleeding afterwards.

“It didn’t hurt, it kind of gave me some cramps, but that was about it. It just made me feel like I was on my period,” Julie says. She describes a “slight pinching” when the doctor biopsied the cells, but says her recovery time only lasted through the car ride home.

For patients who don’t have a biopsy during their colposcopy, or for patients whose biopsy reveals low-grade abnormalities, “you would basically monitor them,” says Cuzick. He suggests that patients wait about one year before their next test to see if the abnormalities have disappeared.

What if my doctor says I need surgery?

If the biopsy reveals “high grade” lesions that could be precursors to cancer, however, then the woman will need a larger surgery to have the abnormality cut out. Depending on the country, only about 10 to 20 percent of women with positive HPV tests go on to have a more involved procedure, usually either a cone biopsy or a loop excision. Both surgeries remove one to two centimeters of tissue from the cervix.

During a loop excision, the doctor uses a low-voltage electrified wire to cut out the abnormal tissue while the patient is under anesthesia. The procedure costs approximately $1,000. Side effects are generally minimal, and include cramping and vaginal discharge. But while loop excisions are highly effective for preventing the recurrence of abnormal cells, they can result in pregnancy complications later on, according to a 2005 study.

In a cone biopsy, the doctor uses a knife to make a cone-shaped cut and remove the abnormal cells.  Cone biopsies are slightly more expensive than loop excisions, costing about $1,500, and result in more negative side effects. In addition to vaginal bleeding and risk of premature birth, they can cause cervical scarring, which can lead to painful periods and fertility issues.

Because of these risks, many surgeons hesitate to perform such procedures on women under age 25 unless the cells are at an advanced stage of abnormality, Arbyn says.

Most women, however, will never reach that point. And the best treatment for HPV is prevention, says Dr. Blank. The vaccines Gardasil and Cervarix consist of three shots over six months, and can protect against cervical cancer; both cost approximately $130. The CDC recommends that boys and girls receive their vaccinations before becoming sexually active, though people can still be vaccinated until their early twenties.

After Julie’s colposcopy, her doctor called to say that her cells were benign. He advised her to schedule a pap smear every six months for up to three years so they could continue to monitor her cervix. Julie was relieved, but also skeptical about her experience after that initial positive test. “It felt like they were just trying to get every procedure sucked out of me that they could,” she says.

*Name has been changed.

Roni Jacobson graduated from Emory University with a B.A. in psychology. Following a stint teaching Arabic in Minnesota, she started work as a behavior therapist at the Marcus Autism Center, where she learned about research methodology and gathered material for some gripping stories. Roni has worked in mental health policy at The Carter Center for the past year, and is excited to have found an outlet for her experiences at SHERP.

It’s really very complicated inn this active life to listen news on TV, thereefore I just use web for that purpose,
and get the newest information.