A recent study adds to growing support for the use of vaginal swabs for STD testing, over the more invasive endocervical swab 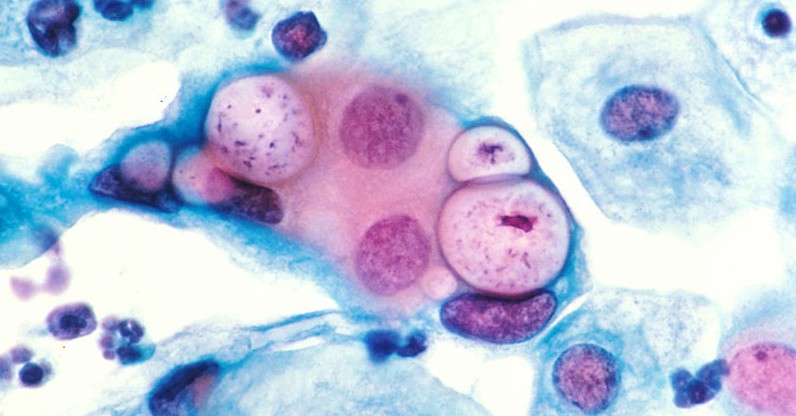 Chlamydia cells like these may be detectable even from less invasive diagnostic tests [Image Credit: Wikimedia Commons]

The pap smear, a test meant to detect precancerous cells in the cervix, is an uncomfortable rite of passage for most modern woman. But now it’s become apparent that sexually active women only need a pap smear once every two years, or even three. This poses a problem for those not in monogamous relationships — for many women, STD testing and pap smears have become linked, since clinicians seem to have a “well, I’m already in there” mentality when it comes to collecting endocervical samples.

But there’s a better way to test for STDs like chlamydia and gonorrhoeae. A new clinical assay (that’s a clinical trial designed specifically to try out a new commercial product, in this case the Cobas 4800 testing platform) found that a non-invasive and patient administered vaginal swab actually might be more sensitive than typically used endocervical swabs — regardless of the brand of the test. Dr. Barbara Van Der Pol, an epidemiologist at Indiana University and lead author on the study, believes that her results add to growing evidence against the use of more invasive testing methods.

Why should you care? A vaginal swab is something you can do yourself, alone in the bathroom of your doctor’s office — or even at home. It’s a simple procedure that requires just a shallow insertion and quick twist. So if pelvic exams make you squeamish or you’re nervous about cold speculums and pinchy q-tips, a vaginal swab could be the best way for you to take charge of your sexual health.

The Cobas can analyze any of the standard samples (the most common is endocervical, with urine catch and vaginal swabs trailing behind), so Van Der Pol included them all in her assay, allowing her to compare the success of different methods of testing even within the commercial product she investigated. In her final data, which included samples from 4279 women (each one did first-catch urine, a vaginal swab that was either self or clinician collected, and an endocervical swab), the results didn’t show any significant differences between self and clinician administered vaginal swabs. But those results did show that these kinds of samples are just as good at detecting Chlamydia and gonorrhoeae, if not a little better, than the traditional endocervical test. It’s far from definitive proof that one is better than the other, but the added benefits of the non-invasive test make it silly to ignore the fact that they might have results that are even just comparable.

Dr. Lars Falk, a professor of Venereology at Orebro University Hospital in Sweden who wasn’t involved in the study, says the data “confirms the findings of other research about the high sensitivity of self-collected vaginal samples.” An important thing to prove, as he feels that speculum exams are invasive, dissuading some women from getting tested when they should. “The problem for the caregiver,” he said, “was to trust the test procedure to be reliable.”

Van Der Pol agrees that the idea of vaginal swabs being less effective is outdated. While older testing methods required live cells, which made endocervical swabbing necessary, current tests need only DNA, which vaginal swabs can obtain more of. The opening of the cervix, she says, lacks the large surface area of the vaginal wall. “So the sensitivity is actually better.” And the test is cheaper, since it doesn’t require the time and billing that a pelvic exam does.

But will you be offered a self-administered swab the next time you ask for STD testing? That depends on your doctor. “Most STD screening is done by people doing routine reproductive healthcare,” Van Der Pol says. “There’s this mindset that while doing a cervical exam, you might as well do an endocervical sample. But we’ve found consistently that women prefer being involved in their own testing, and that it actually allows physicians to spend less time performing exams and more time focusing on patient care.” So the next time you’re at the lady doctor, don’t forget about STD testing — and be sure to ask what your options are.

This mirrors much of the research coming from Australia, which is shown or linked to at viradux.com. Their research has led to two new products which hold the only real promise of an actual herpes solution.

They also just had a press release detailing a joint venture with a Chinese firm that will be mass producing an affordable (like $10USD) field test for HSV1 and HSV2. It could be a game changer in the war against herpes.

It would seem that this is very good news for women and for the whole movement to protect and detect std infections.

Anything that makes testing and detection for at risk individuals is a step in the right direction and another tool in the arsenal for people willing to accept some level of personal accountability.

One of the keys to this happening is an awareness among health care professionals to make their patients aware that this is available.