With living tissue as his artistic medium, Oron Catts aims to put science into perspective. 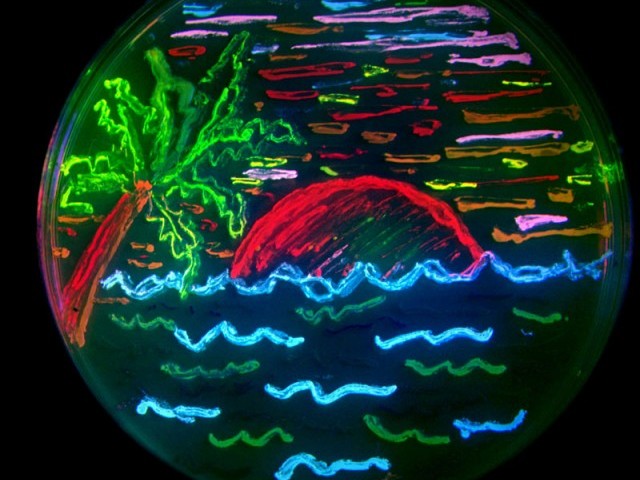 Impressionist or cubist? Bee-ats me!

Oron Catts knits tiny sweaters from cells and grows toy dolls from living tissue, but the “bio artist” wants to make sure his intentions are clear. “I’m not interested in science,” he recently announced to a room brimming with scientists, “I’m interested in life.”

Catts spoke on September 30th at CUriosity3, a Columbia University seminar program that encourages dialogue between scientists and artists. A bohemian with an irreverent, jaunty goatee that contrasts his slick ponytail, Catts is a member of the BioArt movement, which promotes living tissue as an artistic medium. He’s a bioengineer without any formal laboratory experience, a Harvard researcher without a PhD. He embodies the enigma of a science artist.

While the CUriosity3 program aims to connect art and science, the event highlighted gaps in perspective that are difficult to bridge. Catt’s foil was Gordana Vunjak-Novakovic, a biomedical engineer at Columbia, who provided an overview of stem cell research while regularly trying to squeeze in artistic references. Armed with high-definition micrographs of bright green stem cells, Vunjak-Novakovic’s unfaltering message was that “even cells are artistic.” The crowd applauded as a digital image of cancer cells clustered into a mangled smiley face on the screen behind her –unimpeachable evidence, she said, that science can be pretty.

Catts took the microphone and shrugged. “Art.” he said, “It’s not so much about making pretty pictures.”

He explained that science art is less about aesthetic beauty than it is about arming non-scientists with the context to confront new technology and research. “There is no cultural language to explain where we are at the moment,” he said. According to Catts, scientists are perpetually surrounded by marvels, from stem cells to prosthetic organs, that challenge our traditional definitions of life. And researchers are ill-equipped to capture the societal implications of their work or convey its importance to outsiders.

Determined to confront these marvels at their source, Catts trained as an artist while at several scientific laboratories. He eventually came to believe that his art could accomplish feats that science alone could not. “Artists have a license –that scientists do not have— to speculate and engage without the necessity of doing anything functional,” he said.

And with this license to speculate, Catts has added meatless frog-cell steaks and solar-powered fountains to his repertoire of fleshy dolls and cellular sweaters. His artistic portfolio spans a gamut of scientific fields, incorporating genetics, engineering and cell biology, but never, Catts insists, producing anything remotely “pretty.”

A science artist’s job, he asserted, is to help people cope with the constantly changing world, not to dazzle them with antiquated oil paints or fancy micrographs. For Catts, science art is not about beauty. Instead, he says, it’s a “lifelong search to discover what life is.”