Bora as a catalyst 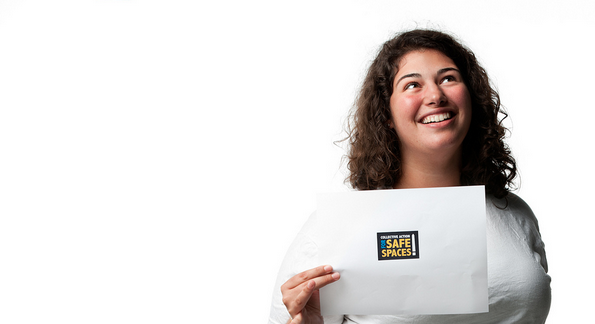 The author, who participated in an anti-harassment advertising campaign.

Last week, the science journalism community was rocked by a controversy quite different from the usual scientific debates. Bora Zivkovic, the blog editor at Scientific American and the founder of the Science Online conference, was accused of sexual harassment by first one, then several young female writers. He apologized for the first incident, saying that it was a one-time mistake. When more stories came to light, he admitted to all of the incidents, eventually resigning from his positions with Scientific American and Science Online.

Supporters of Zivkovic were quick to point out that he spent much of his career promoting the work of young writers. He was an advocate and mentor for many at the beginning of their careers, tweeting their articles to his thousands of followers. As the founder of the Science Online conference, he created a casual atmosphere in which writers, researchers and educators could come together to discuss the state of science communication. In some ways Bora’s connection to early-career journalists makes the scandal that much more poignant, because it’s so decidedly confusing, and a little creepy.

Sexual harassment had just made news the week before after blogger Danielle Lee had posted an email exchange with an editor of the publication Biology Online. In it, the editor called Lee an “urban whore,” because she declined to write for that publication for free. I find the editor’s implication appalling, especially because this sort of lashing out would probably not happen to a man under the same circumstances.

But I think these scandals serve to bring women’s place in science journalism to the foreground, finally making it part of the conversation. Just a few weeks before Zivkovic’s actions came to light, the New York Times Magazine ran a feature article in which Eileen Pollack, a creative writing professor at the University of Michigan, described her personal experiences as a woman studying science in the 1970s, comparing them to a young woman’s experiences today. Pollack writes: “I was dismayed to find that the cultural and psychological factors that I experienced in the ’70s not only persist but also seem all the more pernicious in a society in which women are told that nothing is preventing them from succeeding in any field. If anything, the pressures to be conventionally feminine seem even more intense now than when I was young.”

To judge from available statistics, most women would probably agree with Pollack’s assessment. Things have definitely gotten better in the past few decades; according to a 2011 poll, 1 in 4 women have reported sexual harassment in the workplace, down a bit from as many as half in 1992. But this number is still way too high for a nation that claims to be so progressive. Most troubling, however, is that educated, intelligent women feel they must keep quiet about these incidents, which some sources, like the Committee to Protect Journalists, attest to the power of social norms. To me, this is what  Pollack means when she refers to “pressures to be conventionally feminine.” Being feminine, in that sense, means submissive—which astute, incisive writers and scientists are usually not by nature.

Despite a widespread unwillingness to report incidents, it’s not as though all women are keeping quiet about the prevalence of harassment. Rose Eveleth, a young producer/writer with a strong online presence, tweeted a few days after the Bora scandal came to light: “Dudes, how many stories of workplace harassment do you need to hear before you realize that it happens *all the time*? Honest question.”

Even Seth Mnookin, author of several books about media, culture and medicine as well as the blog The Panic Virus, took a moment to put himself in a woman’s shoes in an attempt to understand what harassment means: “As a white man living in the United States in the twenty-first century, I have no idea what it’s like to be bombarded with loutish behavior and unwanted advances on an ongoing basis. Several years ago, a female friend told me about being groped on the subway. I was shocked, a fact which she found laughable: She couldn’t believe that I had no idea that every single woman living in New York had to navigate those waters every single day. By bringing light to one of the often-undiscussed realities of being a woman, Monica has made it that much harder for men to be clueless about what’s going on in the future.”

I’ve experienced my own fair share of sexism and harassment, although never in the workplace. As Seth mentions, ignorance (by men or women) is not an excuse in this day and age; the ongoing prevalence of harassment is something that we all must stay aware of. Women are forced to build up their defenses, develop mechanisms to cope with the frequent barrage of whistles and superficial comments, but that’s not how it should be. Ideally, the harassment would just stop; men ranging from the pathological to the pathetic would get it together and simply realize that women deserve their respect.

If nothing else, these scandals have provided a cathartic opportunity to discuss a topic sometimes avoided in a field of professional communicators: the difficulties that women continue to face. Navigating the challenges of a career in journalism, such as maintaining visibility, engaging in self-promotion, and negotiating mentor-mentee relationships, takes on a different meaning for women as we balance our identities in our personal, social and professional lives. The final straw of sexual harassment doesn’t make that balancing act impossible, but it adds an extra weight that is unnecessary and uncalled for and, in the end, causes some women to stumble.

One needs to be cautious with hindsight… I’ve repeatedly seen the word “creepy” now applied to Bora’s shepherding of young, vibrant, talented science-writer-wannabes (I’ve even seen it applied to the famous hugs he dispensed at Science Online gatherings) — unless further revelations indicate otherwise, I still believe that that passion and enthusiasm for science communication was just Bora being Bora!… supportive, positive, energetic (famously on very little sleep), ardent, driven, sharing — we need MORE individuals like that! — to my mind there was no ‘creepiness’ factor involved.

Sex is a singularly peculiar driving force in human affairs… ask Bill Clinton, Eliot Spitzer, John Edwards, David Petraeus… (and on and on and on). I hope when all the discussion, ideas and changes, catharsis and healing are accomplished, at some point, Bora will again be an active, contributing member of the science and blogging community. I know it will take a lot of time, but it would be just as ashamed to waste his talents as to ignore his indiscretions.

Mighty useful. Make no mistake, I apactripee it.