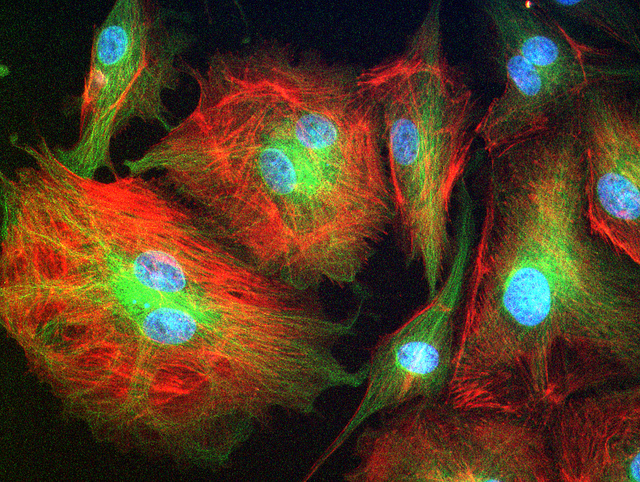 Cells organize and transport molecules inside themselves. Image credit: Joseph Elsbernd via Flickr

From the 1970s through the 1990s, Rothman, Schekman and Südhof mapped out the molecular blueprints for the system, which the researchers call vesicle traffic machinery.

Think of a cell as a small but efficient shipping yard. To prepare some to be exported, and others to be quarantined, the cell neatly organizes all its packages. To move packages around, small bubbles called vesicles transport their cargo from one area in the cell to another. This cargo could include proteins, neurotransmitters or hormones: the essential substances for a healthy body. When a vesicle must export molecules, it “docks” at the cell membrane—the outermost part of the cell—just like a ship at a harbor.

Though the discovery has not yet led to any new medicine, Dr. Jan-Inge Heter, the clinician present at the awarding, said that understanding of this basic machinery has helped diagnose several important diseases. Disrupting this system leads to diabetes, where the cell does not export enough insulin at the right moment. And Tetanus, a disease that causes thousands of  deaths a year in children, is the product of a toxic bacteria that interrupts the vesicles. ­Nerves that fail to communicate through this Fed-Ex delivery system are the cause of many neurological diseases.

“New knowledge of how we are in the world is great benefit to mankind,” said Juleen Zierath, chairman of the Nobel Committee in a post-announcement interview on nobelprize.org. “These individuals have allowed us insight into disease prevention and prospective treatments.”

The three Nobel Laureates began their research independently. Schekman, a professor at Yale University, discovered the gene that controls the vesicle system by comparing normal yeast cells to mutant yeast cells with congested vesicle traffic. Rothman, a professor at University of California at Berkeley, discovered that vesicles could dock at cell’s borders because of proteins that bind to each other like zippers between the vesicale and the membrane. Südhof, a professor at Stanford, found that calcium proteins triggered the fusion between vesicle and membrane, allowing the cargo of molecules to pass from cell to cell.

Although Südhof could not be reached, the Nobel Assembly said Schekman and Rothman, who have collaborated together, were “happy, delighted and look forward to coming to Stockholm in September” for the award ceremony.

Informative! But I was wondering whether the cargo delivery system is effective.