How researchers are beginning to think differently about urban biodiversity 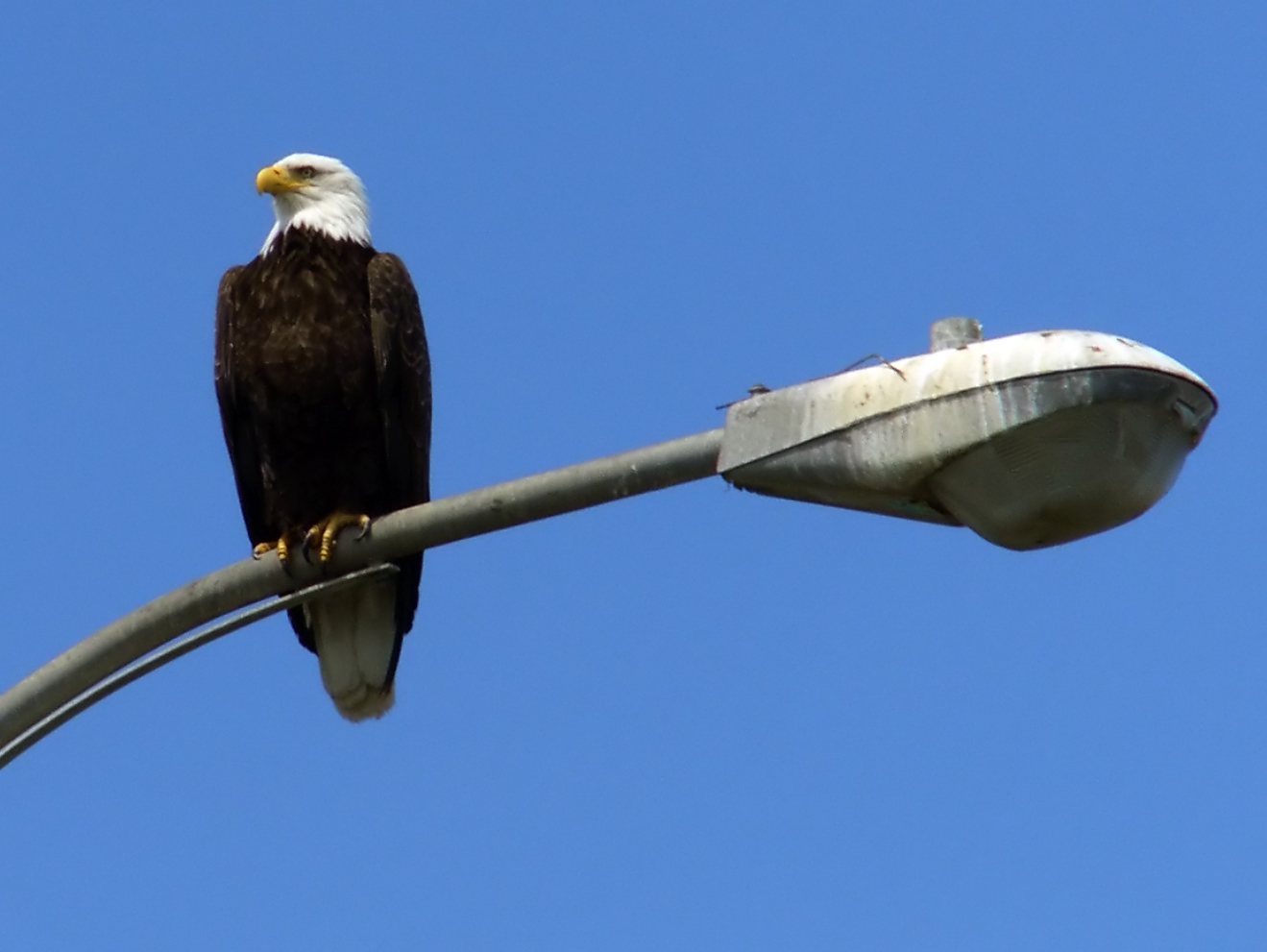 High above southwest Pennsylvania, it’s not unusual to look up and spot a bald eagle flying thousands of feet in the sky, on the hunt for prey. What’s especially surprising is that its nest isn’t in a secluded forest; it’s in the industrial heart of Pittsburgh, in a neighborhood called Hays. The eagle, its mate and their three newborn eaglets reside on a deserted bluff right next to a roaring scrap yard and a thunderous train line, neither of which has persuaded the pair to abandon Pittsburgh’s first eagle nest in over 150 years.

It’s an increasingly common sight in cities across the world, wildlife experts say. “On the one hand, these aren’t natural environments — they’re man-made, and altered,” explains Brian Millsap, national raptor coordinator for the U.S. Fish and Wildlife Service. “But on the other hand, to the birds, they’re just another feature on the landscape. They’re acclimating to them and taking advantage of them.”

“It’s a natural response to an unnatural environment,” he says.

The urban migration is being led by birds large and small, but it also includes a wide range of plants and animals, such as fishers and bees. City planners are rolling out the red carpet for them all, aware of the benefits that increased urban biodiversity can bring, including cleaner water, greener parks and even cooler summer temperatures thanks to healthier shade trees.

In fact, designers of urban spaces are increasingly shifting from merely tolerating nature to actively promoting increased species richness by making sure their buildings, streets and parks are optimized for maximum biodiversity. For example, one of the purposes behind Milan, Italy’s vertical forest buildings is to help sustain bigger populations of urban birds and animals.

“There’s been a lot of movement to import greening, usually on roofs, and that’s a great way of reintroducing or restoring the ecology,” says Mitchell Joachim, an architect and co-founder of the non-profit design group Terreform ONE, based in New York City. The Via Verde / The Green Way project in the Bronx, for example, aims to provide energy-efficient affordable housing connected by a long stretch of rooftop gardens. The prime purposes of these gardens are relaxation and food, but “the end result does create biodiversity almost by default,” Joachim says.

One of the surprising things about the push for nature-friendly urban design is that it’s coming at a time when many people still assume cities are biological wastelands. “When I mention urban biodiversity to my students for the first time, a common reaction is ‘Are you talking about rats and pigeons?’ ” Columbia University ecologist Matt Palmer wrote in a blog post from August 2012.

“Cities have lost a lot of biodiversity, but they support a lot more than we normally expect them to,” agrees Myla Aronson, a visiting professor of ecology at Rutgers University in New Jersey. She and several other researchers around the world recently published a comprehensive study that found while urbanization does decrease the abundance of plants and animals, the mixture of species continues to resemble the mix of the region. Fears of a global homogenization in which every city’s wildlife will look like every other city’s thus may be overblown, the authors concluded.

“If you look at cities in North America, they’re reflecting the differences in geographic zones across North America, and there are not a lot of similarity among cities across those regions,” explains Charles Nilon, a professor of fisheries and wildlife at the University of Missouri and a co-author of the study. “The flora of, say, Berlin, reflects the larger flora found in Central Europe, and is distinct from the flora of, say, Baltimore.”

The best predictor for biodiversity, the study’s authors concluded, was the amount of green space within the city. “We found that the more natural area that’s preserved or restored in the city, the more biodiversity you’ll find,” says Rutgers’ Aronson.

The study’s most striking finding is that certain kinds of birds — most obviously pigeons and house sparrows, but also, surprisingly, raptors and waterfowl as well — actually thrive in urban areas. “Those species often have characteristics that occur in cities or can be met in cities,” says Nilon.

Considering the bounty of food available in urban areas, it’s no wonder some birds have acclimated so well to cities, according to Millsap of the Fish and Wildlife Service. Raptors, for example, can use high roof sites for nesting, and find food even when flying above the city at high altitudes. Bald eagles, which typically nest on high canopy trees, are now commonly found on top of cell phone towers or utility poles. Peregrine falcons, which usually nest on cliffs in the wild, are now nesting on city rooftops. “Buildings are just an artificial cliff to them, and it works pretty well,” says Millsap. He also mentions the ability of raptors to capitalize on non-native food sources. For example, Cooper’s hawks, a woodland species found across North America, commonly hunt invasive Eurasian collared doves in cities. For waterfowl, most cities are close to year-round water sources.

The study’s findings beg the question: can we use cities as a way to protect and restore populations of threatened and endangered species?

For Millsap, using cities to rehabilitate endangered species “absolutely has potential, and it’s already worked that way.” After most uses of the pesticide DDT were banned in 1972, bald eagle and peregrine falcon populations began recovering slowly, and were reclassified from “endangered” to “threatened” in 1995 and 1999, respectively. What really helped, however, was the release of young birds bred in captivity in urban areas, where they could avoid predators such as the great horned owl. “The rate at which the recovery happened was certainly much faster because of those releases, and because of the birds’ ability to use urban habitats and avoid natural predators,” Millsap says.

Aronson and Nilon believe the key is to provide more open, natural spaces. “Restoring green spaces will support more plant and animal species,” says Aronson. Large parks are crucial, but including native plantings of fruits and flowers in residential gardens is helpful, too, in part because it improves insect and bird biodiversity.

A remarkable project in New Zealand’s capital city, Wellington, shows just how dramatic these urban transformations can be, according to Tim Beatley, a professor of sustainable communities at the University of Virginia. As the head of the international Biophilic Cities Project, Beatley visited Wellington to see Zealandia, a 500-acre wildlife sanctuary located in the middle of the city. The kākā (bush parrot), takahē, saddleback and many other endangered native birds have rebounded through the sanctuary, and they have quickly spread into surrounding neighborhoods within the city.

Another great example of where urban biodiversity has been recovered is in Singapore. “They’ve had a lot of success with the recovery of a number of bird species, especially black-faced spoonbills,” says Beatley. Most notable is the city’s Khoo Teck Puat Hospital. Its sustainable features include multiple green rooftops, green window boxes and a courtyard with a waterfall that’s home to native species of fish. The hospital grounds have attracted many animals, especially birds and butterflies.

What all of these successful designs share, according to Beatley, is a passionate enthusiasm to engage with the natural world. “Nature is not something optional — we really have to include it in every notion of urbanization,” he says. Over 50 percent of the world’s human population lives in cities, and the World Health Organization expects that number to be closer to 70 percent by 2050. “The human experience is becoming an increasingly urban one,” agrees Aronson.

The devastation Hurricane Sandy wrought in New York City and the rest of the densely populated East Coast in 2012 should be a wake-up call, according to Joachim, the New York architect. We all need to recognize, he says, that nature— including plant and animal biodiversity — is not something we can box out of our communities, even the most urbanized ones. “There’s no such thing as a division line or armistice between nature and cities,” he says.

Neel Patel currently holds B.S. in biology from Virginia Tech. Writing has always been his fiercest passion in life, and it was during a brief stint working in an immunology lab that he decided to pursue science writing. Before being accepted to SHERP, he worked as an editorial intern for The American Horticultural Society. His biggest scientific expertise is in human disease and pathology, but there is no topic or issue he wouldn’t write about. His other interests include metaphysics, pop culture, and everything in between. You can follow him on twitter at @n_vpatel.