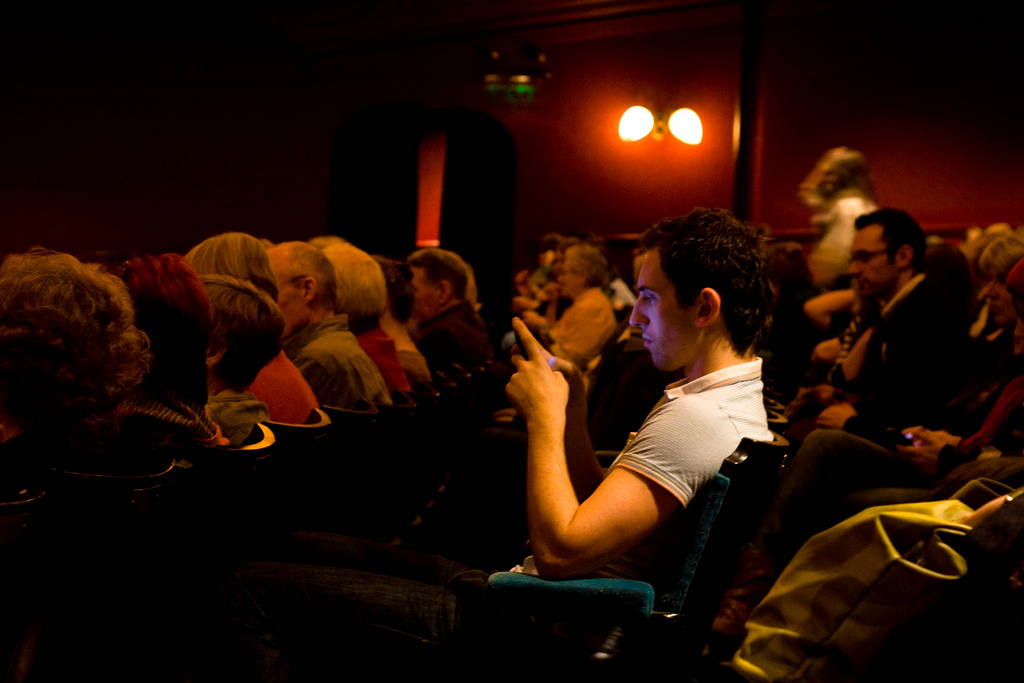 Echoes from the Future of Opera

I’m having drinks with a friend at Fat Baby bar and lounge in lower Manhattan when I overhear a couple in a heated argument. The man cowers as his date wails about his obsessive posts on the serial killer crime show “Dexter” and Christian Bale’s performance in “American Psycho.” According to the woman, his social media behavior doesn’t make him boyfriend material.

There’s a tap on my shoulder, and a woman with clipped bangs and bright red lipstick asks me, “So, what do you think about the guy she’s with? I’m that girl’s cousin.” I tell her I can’t give a proper answer without doing some research, so she prompts me to check out his profile on my phone to see for myself.

This is just another routine performance during “Play/Date,” an interactive play about dating in a digital age in New York City, which ended its run on Nov. 5. Looking for ways to make theater-going more spontaneous, a small but growing number of theater experimenters are urging audiences to turn on their smartphones instead of issuing stern warnings to shut them off.

“Play/Date” is part of the vanguard of interactive theater performances tagging on to this trend. Audience members can whip out phones during the show to follow the characters’ fictional Facebook, Twitter and Instagram accounts. The trend has even made it to Broadway, where a soon-to-open show — fittingly called “Nerds” — will use interactive technology.

“We are looking to really engage the audience in a direct, interactive way with their own technology and personal devices,” said Casey Hushion, the director of the new musical, which follows Bill Gates, Steve Jobs and the tale of computer history.

The projections designer of “Nerds,” Daniel Brodie, has been tinkering with different inventions and ideas for the production. Audiences may be able to download an app or online game that can be played with others in the theater during intermission or toy with interactive computers in the lobby, he said.

Hushion and Brodie didn’t reveal exact specifics of how the show would use the technology because they didn’t want to spoil the surprise before its spring 2015 opening.

Other live-entertainment experts are already deep into innovative experiments. Damian Bazadona, president and founder of a digital marketing agency called Situation Interactive, has been a performance junkie all his life. In his early career as a D.J., Bazadona began cultivating ideas on “how interactive technology can enhance the power of the live experience.”

The results are new digital advertising strategies that Situation Interactive has developed for Broadway hits such as “Mamma Mia!” and “Wicked.” One idea is to collectively display audience members’ tweets about the show on monitors around the theater lobby during intermission and after the performance. Bazadona hopes that audience members feel a sense of community by sharing and comparing their opinions with others in the crowd.

Jason Freeman is pushing similar community-building ideas for classical music audiences through his work as a music professor at Georgia Institute of Technology.

“We’re a lot of people alone in a space together,” Freeman said. “When we go to large performances, we go with a few individuals, but we don’t feel much of a connection to others who are there.”

For his doctoral dissertation, Freeman composed an orchestral experience called “Glimmer” in which he essentially gave the conductor’s baton to the audience. People waved different color glow sticks that corresponded to sections of the orchestra. An algorithm calculated the movement of the glow sticks and relayed signals to the orchestra pit. This told the musicians which notes to play and how loud to play them.

It took a year to develop the technology for “Glimmer,” which debuted in 2004. The piece has been performed a few times since then, each time receiving more positive reviews, Freeman said.

Mark Coniglio, the co-artistic director of the dance company Troika Ranch and a pioneer of interactive performance technology, has watched the use of mobile devices in theater evolve over time. In 1989, he created the MidiDancer, a sensor-decorated bodysuit that recorded the angular motions of a dancer’s body, enabling him or her to control the music. Coniglio believes that smartphones’ connectivity can shift interactive theater.

With cellphones being practically ubiquitous, “you’re going to see shows where Facebook and Twitter become a method for actually performing pieces,” said Coniglio, who recommended “Play/Date.”

But smartphones, of course, can also distract audiences. “If you’re doing a performance and everyone is more invested in looking at their lap and their phones, it’s problematic,” said Andrew Lazarow, who recently received a Google grant with two colleagues at New York University’s Interactive Telecommunications Program to explore interactive video and performance.

On the other hand, Lazarow said, phones can also enhance what’s happening on stage. He has seen smartphone technology that creates an augmented reality in which a phone’s camera scans an object and a 3-D image or animation appears on the screen. “You’re layering something digital on top of the real,” Lazarow explained. This way, smartphones would draw your eyes to the stage while being interactive.

It’s rare for today’s audiences to interact with actors on stage during a show, but Situation Interactive’s Bazadona thinks that will soon change as more producers realize how popular—and profitable—interactivity can be.

“People are craving the live experience,” Bazadona said. “I think technology will have a sizeable role in this and in a really great way.”