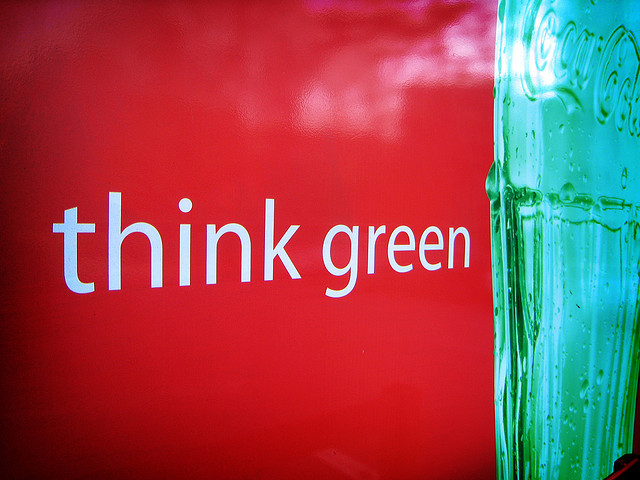 Georgia, home of Coca Cola, was thinking green with its $5,000 electric vehicle tax credit. July 1, drivers will have to say goodbye to the tax credit.[Image credit: Flickr User Kevin Trotman]

The state of Georgia is known for peaches and red state politics, not green-friendly policies. But in just 12 months, from March 2013 to March 2014, Georgia went from 1,469 registered electric vehicles to 10,482 — a whopping 614 percent increase. The state was second only to California’s 77,222 electric vehicles.

That incredible growth is coming to an end July 1 of this year when a transportation funding bill, which eliminates the current $5,000 state tax credit Georgians receive when they register zero-emission vehicles, takes effect.

The Transportation Funding Act of 2015’s electric vehicle statute was put in place to end the program’s cost, which, according to a Georgia State University Center for State and Local Finance report, was more than $1 million in 2012 and more than $14 million in 2013.

But how did this staunchly conservative state originally end up with a technology long championed by the Left?

Around that time, hybrid vehicles were gaining notoriety when the first mass-produced hybrid, Toyota’s Prius, came on the market in 1997. Hybrids use both electricity and gasoline to get you down the highway. Pure electric vehicles (EVs), as the name suggests, are powered solely with electricity.

That first income tax credit for alternative fuel vehicles was $1,500. Two years passed by and the legislators upped the credit to $2,500 for hybrids and other low emission vehicles. A $5,000 tax credit for zero-emission vehicles, such as pure EVs, followed in 2001. The state created traffic breaks, too, allowing even EV drivers who were alone in their cars to use highway lanes and toll gates otherwise reserved for high-occupancy vehicles.

At first, there was little response from car buyers to all those incentives, mostly because so few qualifying vehicles were available. That began to change in 2009 when the first Tesla electric roadsters appeared on the market. And when Nissan began producing its Leaf model in nearby Smyrna, Tennessee, in 2013, “The floodgates really opened up,” said Don Francis, coordinator of the U.S. Department of Energy’s Clean Cities-Georgia coalition, and electric vehicle proponent.

On the federal level, consumers can get up to $7,500 back on their taxes from a similar policy, depending on whether the person is leasing the vehicle or not, its cost and its battery’s efficiency.

The GSU Center for State and Local Finance report also showed that when combined with the federal tax break — which, when leasing, means the dealership gets the $7,500 and passes those savings onto the lessee— the Georgia tax credit brings the price of leasing the almost $30,000 Nissan Leaf for three years from $199 per month to $60 per month.

Georgia’s tax credits made the state a model for how to encourage the sale of electric vehicles. California is still number one, however, thanks to its larger population and its implementation of a $2,500 rebate, rather than an income tax credit, that drivers can use sooner. Combined with federal tax credits and the state’s carpool lanes, Californians are getting a pretty good deal.

Proponents of EVs such as Francis say the vehicles are much cleaner than standard gasoline-powered cars.

“Electric vehicles are domestically fueled and they get cleaner over time as opposed to a gasoline vehicle, which had the cleanest day of its life the day you drove it off the showroom floor. It continues to degrade until the next thing you know, you’re behind it in traffic and it’s killing you with smoke and fumes,” Francis said.

But researchers say a key drawback for purely electric cars is that they’re not truly any greener than gas-electric hybrids or even gasoline-powered cars. The vehicles’ electricity comes from power plants that burn coal, oil or natural gas, which together supply about two-thirds of the U.S. grid according to the U.S. Energy Information Administration.

“So if EVs are not any cleaner — which was the original motivation for looking at EV incentives — then you have to question, why bother?” asks University of Colorado engineer Jan Kreider, who conducts life-cycle analyses of vehicles, assessing their environmental impact from the factory to the junkyard.

The question of where electricity comes from is crucial to determining whether purely electric cars are worth incentivizing, according to Stanford University economist Frank Wolak. Norway, for example, gets almost all of its electricity from hydroelectric sources, so encouraging all-electric cars “makes a lot of sense simply from an economic perspective as well as a greenhouse gas emissions perspective,” he said. In the U.S., there are very few places where hydro or other renewable power sources dominate, Wolak added.

Besides increasing renewable electricity, a key goal for EV advocates should be extending battery life and expanding the number of recharging stations, according to Wolak. Currently, for example, the Nissan Leaf can run about 84 miles between charges, and there are only about 300 charging stations in Georgia, mainly in the Atlanta metro-area. So if you’re out of electricity as you’re going down the road, it’s going to be difficult to charge up with no stations nearby.

Plug-in hybrids such as the $29,990 Toyota Prius can travel 15 to 35 miles on battery power alone, and 300 or more miles in gasoline-electric hybrid mode. Pure electric vehicles such as the Nissan Leaf can only travel 70 to 100 miles, though the Tesla Model S, which starts at $69,900, can travel up to 375 miles with its bigger battery.

Despite their higher price, pure EVs are still slightly outselling plug-in hybrids. Almost 56 thousand pure EVs were sold in the United States from January to November 2014, compared to 51,490 plug-in hybrids, according to the Electric Drive Transportation Association.

Many scientists and policymakers question an all-out push for fully electric cars, which in August 2014 made up only 0.18 percent of all registered vehicles in the United States. And despite Georgia’s recent jump in EV registrations, its tax credits have come under attack from some state lawmakers, who voted in March to end the program due to its cost.

“Georgia spends $13 billion a year buying fuel from out of state. All that fuel comes up pipelines from Louisiana and Texas. So that money was leaving Georgia,” argues Francis. “Now that $2,200 I’m not spending on gasoline isn’t sitting under my mattress. I’m taking that money and I’m spending it on other goods and services in the local economy.”

“Savvy Leaf drivers can simply turn their old vehicles in at the end of that lease and repeat the process — leading potentially to years of cost free, state-subsidized driving,” Georgia Rep. Chuck Martin (R), who introduced the legislation to phase out the credit, said in a January 2015 Atlanta Journal Constitution blog. “While the related federal subsidy is set to eventually phase out, this gift from the Georgia taxpayer goes on and on forever, if nothing is done,” he added.

The Transportation Funding Act of 2015, sponsored by six Republicans, passed in the House, 129 to 41, and the Senate, 42 to 12. The bill cuts the electric vehicle tax credit and raises the vehicle annual registration price to $200, a price higher than the fee levied on gasoline vehicle owners.

Car dealerships are anxious about what the end of the electric vehicle incentives mean for their bottom line. Five months after the Canadian province of British Columbia abolished its $5,000 rebate in February 2014, 100 Nissan Leafs and Chevy Volts were sold, compared to 90 the five months prior. Ontario and Quebec, which kept their rebates of $8,500 and $8,000, sold more than 1,200 of these cars during the same five months, compared to around half that in the five months prior.

Tax credits are the best way to stimulate pure electric vehicle sales, according to Easwaran Narassimhan, a graduate student in international affairs at Tufts University who is studying electric vehicle incentives. For cheaper plug-in hybrids, though, the incentives are not as important in spurring sales, he said. Pure EVs are generally more expensive because the larger batteries cost more.

Advocates counter that the case for pure EVs will get stronger as the U.S. shifts to renewable sources of electricity and battery storage technology improves, allowing longer trips between recharges.

“You obviously need consumers to be consuming a product to push the technology of the product eventually.” Narassimhan said. “But at the same time I think a lot of money needs to go into battery technology research as such to push battery technology to the next level so it becomes affordable and range also increases.

“Unless electric vehicles go across the barriers, I don’t see how incentives will keep driving sales.”

The “long tailpipe theory” that electric cars produce just as much pollution as gasoline cars has been debunked scientifically time and time again. The consensus is clear that they are vastly superior in this regard to ICE vehicles. It’s disappointing that, despite your assertion that they are not “truly any greener”, you don’t provide sources on such. Do the research, and it becomes rapidly clear that this is a fabricated argument.

Remember also that once one owns an EV, the ROI on installing PV solar on the roof becomes very attractive, which is why most of the EV owners I know also charge their cars with solar. This is an inarguably cleaner alternative, no matter who you are.

I am dumping my Leaf when the lease is up. $200 per year tax, range limited, no state rebate, a tax instead. I am done being green, it’s a pain. not worth the aggravation, AND Georgia power charges $8.00 for 80 cents of electric, and sitting waiting to charge is a joke, not to mention there are no charging stations close to highways. Try going from Atlanta to Birmingham, give me my polluting gas guzzler back, just ½ through the lease.

PS My HOA does not allow solar panels in our subdivision. Why should I fight city hall, I got the message go back to GAS.