Engineers are creating more efficient rooftop wind turbines, but their cost is a problem 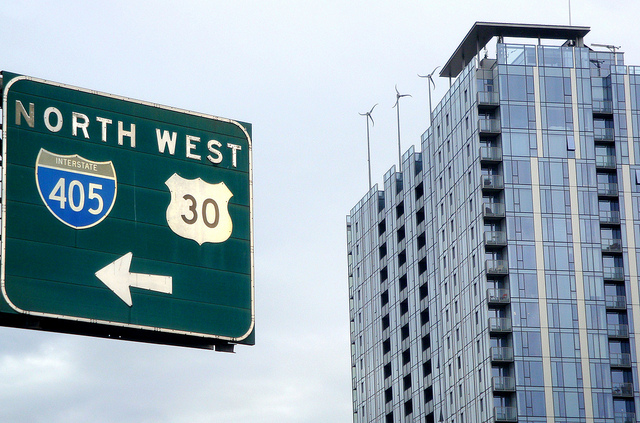 Some engineers are working to put wind turbines on urban roofs, like these on the Indigo West building in Portland, Oregon. [Image Credit: www.TheEnvironmentalBlog.org]

Drilling for Energy, But Not Oil

The skyline is changing in the outer boroughs of New York City, especially in Brooklyn and Queens, where an influx of young, rich people has led to an influx of tall, luxury office buildings and residential towers. Atop these buildings, the wind whips back and forth, turbulent and sporadic — and mostly wasted.

But on some of those buildings, whether they are residential, such as Long Island City’s Pearson Court Square and Downtown Brooklyn’s 388 Bridge St., or commercial, such as the Whole Foods in Gowanus, wind turbines stand tall, a testament to both engineering ingenuity and the public’s increasing green conscience.

“I don’t know if it’s Generation X or Generation Y, but we anticipated a lot of our tenants would be drawn to something different,” Ron Moelis, chief executive of the building’s developers, L&M Development, told the New York Times when Pearson Court Square was completed in May 2014.

Moelis’ statement hints at the dilemma of the urban wind turbine: it looks cool and seems like a nice idea, but its practicality is debatable. While more and more buildings are featuring small wind turbines — from those luxury apartment buildings in NYC to the Eiffel Tower — the economics of small turbines still generally don’t add up, experts say.

Despite the current boomlet in rooftop turbine installation, small turbines are still just a blip in the nation’s overall energy picture. The U.S. is second only to China with 155,000 small (under 100 kilowatt) turbines installed, including $101 million spent in 2012 to raise energy production by 18.4 percent, according to the World Wind Energy Association’s Small Wind World Report 2014. That was only enough to power 1,840 typical American homes.

By contrast, the huge utility-scale turbines seen in fields and large open spaces increased capacity by 138,000 kilowatts in 2012, enough to power 13,800 average American homes, according to a U.S. Department of Energy report.

“People have been trying to develop small wind turbines for the last thirty or forty years. And small turbines did actually play a huge rule in developing the West and the Midwest for water pumping, and eventually small amounts of electricity generation,” said Mike Dvorak, a former wind energy researcher at Stanford University and current independent wind energy consultant. “But once most people in America became connected to the grid, the economics of those turbines were no longer competitive with grid-connected electricity.”

These glitzy new rooftop projects illustrate the problem. While Urban Green Energy (UGE) engineers took advantage of the Eiffel Tower’s height to install two wind turbines, they only generate enough power for the tourist shops at the tower’s base. New York City’s first rooftop wind turbines, installed on top of Brooklyn’s Perry Avenue Building in 2009, generated only 126.92 kilowatt-hours (kWh) of electricity during their first 192 days. The target for that same period was 6269 kWh. The Pearson Court Square turbines, meanwhile, are expected to generate only enough electricity to power the building’s common areas.

Space limitations and economies of scale are the key problems for rooftop turbines. The standard design used by utility companies puts three fiberglass blades atop a 300-foot metal tower, with a typical capacity of 3,000 kilowatts. You would have to install 30 small wind turbines to match that.

“Putting many wind turbines on a building in downtown Manhattan seems like a good idea, but to get a comparable amount of power that you’d get out of one large wind turbine, you have to maintain a very large number of small wind turbines,” Dvorak said.

Utility-scale turbines are also usually placed in flat lands with few vertical obstacles, and the wind tends to blow steadily from just one direction. Higher altitudes at the top of buildings mean higher wind speeds and — theoretically, at least — more energy generation. But Manuel Castro Gil, a professor of industrial engineering at the National University of Distance Education in Spain, said turbulence and multidirectional winds are big problems for turbines in a city filled with skyscrapers.

“This is the major difference in urban sites, where a really complicated and completely different surrounding landscape in each location is typical,” Castro Gil said.

This means the standardized design of a utility-scale turbine just doesn’t work on a rooftop. Instead, engineers have turned to alternate designs such as vertical-axis turbines, which are less expensive, can withstand high turbulence and make use of multidirectional winds. The problem is, they’re also much less efficient. While utility-scale wind turbines typically cost about $2,540 per kilowatt of capacity, small wind turbines cost $6,960 per kilowatt. In 2012, the average small wind turbine in the U.S. had a capacity of five kilowatts.

So if they don’t make financial sense, why would anyone install a rooftop turbine?

“I’m not going to sugarcoat it for you — there’s really no amount of rooftop wind that’s going to power all of New York City. You’ve got too dense of a population in too small of a footprint,” UGE Director of Engineering Scott Van Pelt said.

“That’s not to say that we shouldn’t be using every square foot of roof space to produce solar or wind energy,” he added.

One reason is that they can bring clean energy to poor neighborhoods that are plagued with air pollution, said Elena Krieger, the Renewable Energy Program Director at the research and policy institute PSE Healthy Energy.

“Traditionally, a lot of fossil fuel power plants tend to be located in poor, disadvantaged communities. It’s sort of interesting to see something that isn’t going to create local pollution,” she said.

But the main motivation, Krieger said, is to build public interest and support for green energy. “There has been some evidence in California that people put their solar panels [facing] the street, even if that’s less efficient, so people know they have solar panels. In the same way, having a wind turbine is a very visual symbol of a green building,” she said. “I don’t necessarily think that’s a bad thing.”

While these small wind turbines may not constitute the entirety of NYC’s energy future, they do spur people to take action, Dvorak said.

“It’s educational. Even though they may not be economic, it really does inspire younger generations to think about wind energy and ask questions about it.”