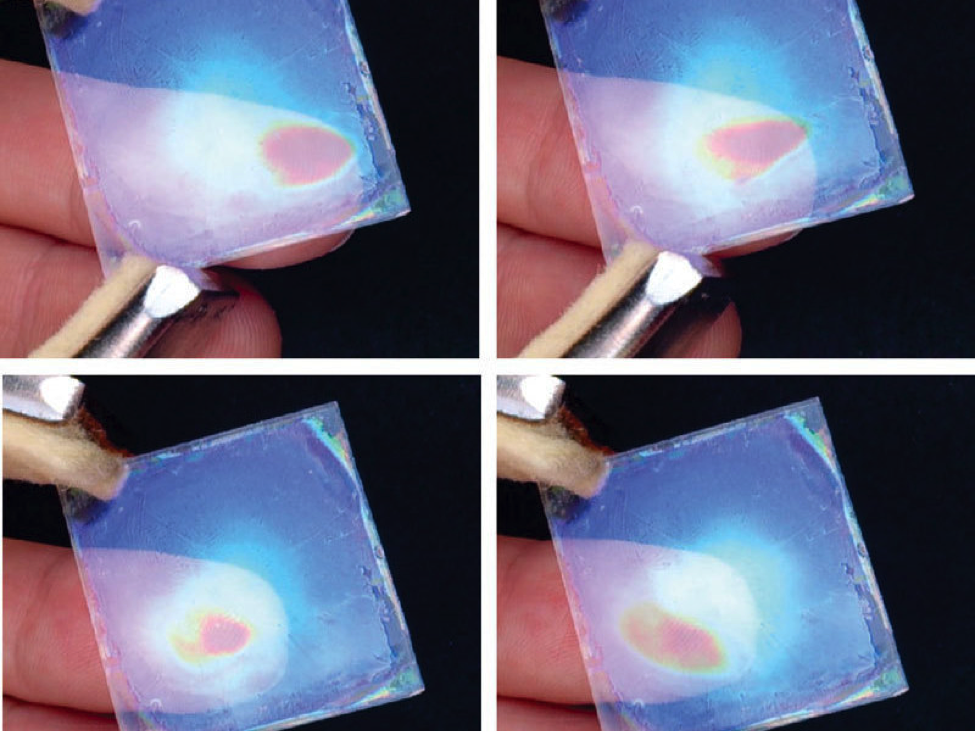 Opalescent colors could be part of your phone screen soon [Image credit:

Tech is the new black

Coming soon, perhaps, to an ATM or smartphone near you: a touch screen you don’t have to touch.

An experimental new sensor that detects tiny amounts of sweat, allowing users to float a finger above a screen instead of making direct contact. And it can easily replace current touch screen technology.

That would make this technology market-friendly, although first its German developers need to figure out how to make the touchless screen less fragile. So if you could switch your current screen for a touchless one right now, you could use your smartphone or an ATM in the same way as usual — but without having to actually touch it.

It might even make you healthier. Filthy touch screens are everywhere — like that MTA machine you used this morning. “You are probably better off putting your hand in a toilet bowl than touching the screen,” a microbiologist told PIX11 News. ATMs and grocery store checkout screens are similarly infested with bacteria. Touchless screens mean avoiding all of that bacterial contact.

The screen works by taking advantage of a crystal called phosphatoantimonic acid that absorbs water molecules very easily. And when water enters the crystal, that specific area swells up and conducts electricity more easily. The sweat on your fingertips triggers an electrical change only in the area of the screen right beneath your finger.

Your smartphone screen already uses similar technology. Those screens know where your finger is because human bodies change the electrical field around the phone. Touchless screens still use electrical changes to figure out your finger’s location — they’re just doing it from farther away. That’s why devices that use the new technology wouldn’t require extra software or hardware updates, just new screens.

The scientists at Germany’s Max Planck Institute who developed the technology, and described it in a recent edition of the journal Advanced Materials, used extremely thin sheets of the crystal in combination with a material that changes colors based on its thickness. So when the crystal absorbs water and swells, the tiny layers become thicker in one area and that area changes color.

The colors aren’t just decorative. If you aren’t physically touching a screen, it might be hard to know whether you’re actually interacting with it. The color change lets you know exactly where the screen is sensing your finger.

Scientists are already working on a way to give the fragile screens a protective coating, since right now they can’t be used outside of the lab. Until they succeed in producing a screen that’s durable and affordable, we’ll have to go on touching our touchscreens — you know, the old-fashioned way.