Old people names of the future

What naming trends have in store for babies born today 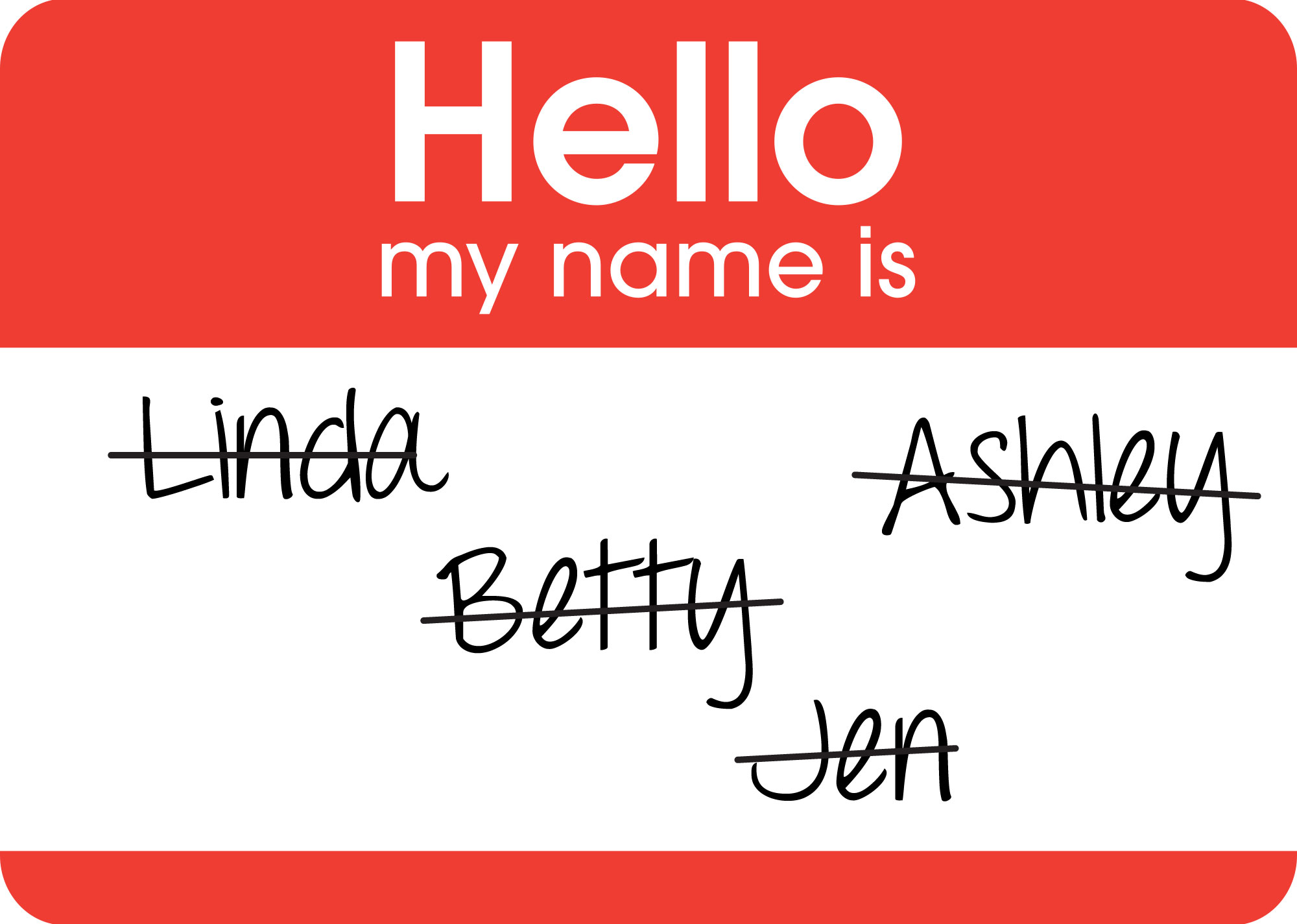 Female names go through sharp trends, which is why we associate them with certain age groups. [Image credit: Sara Chodosh]

What does a Betty look like? To me, she looks like Betty White (and now, by the power of suggestion, she probably does to you as well). Unless you happen to have a friend named Betty who isn’t an older woman — and statistically you don’t — you probably also pictured a woman with white hair and wrinkles.

That’s because Betty is what so many have lovingly termed an old person name, which is any name that we associate with the old people in our lives. Sometimes that association happens because of our own grandparents’ names and in spite of the prevailing cultural perception. If you have a grandmother called Angela, you might think of Angela as an old person name.

But what actually makes an old person name has more to do with trends. It’s not enough for a name to have been popular at a certain time — it has to then become unpopular at some point. 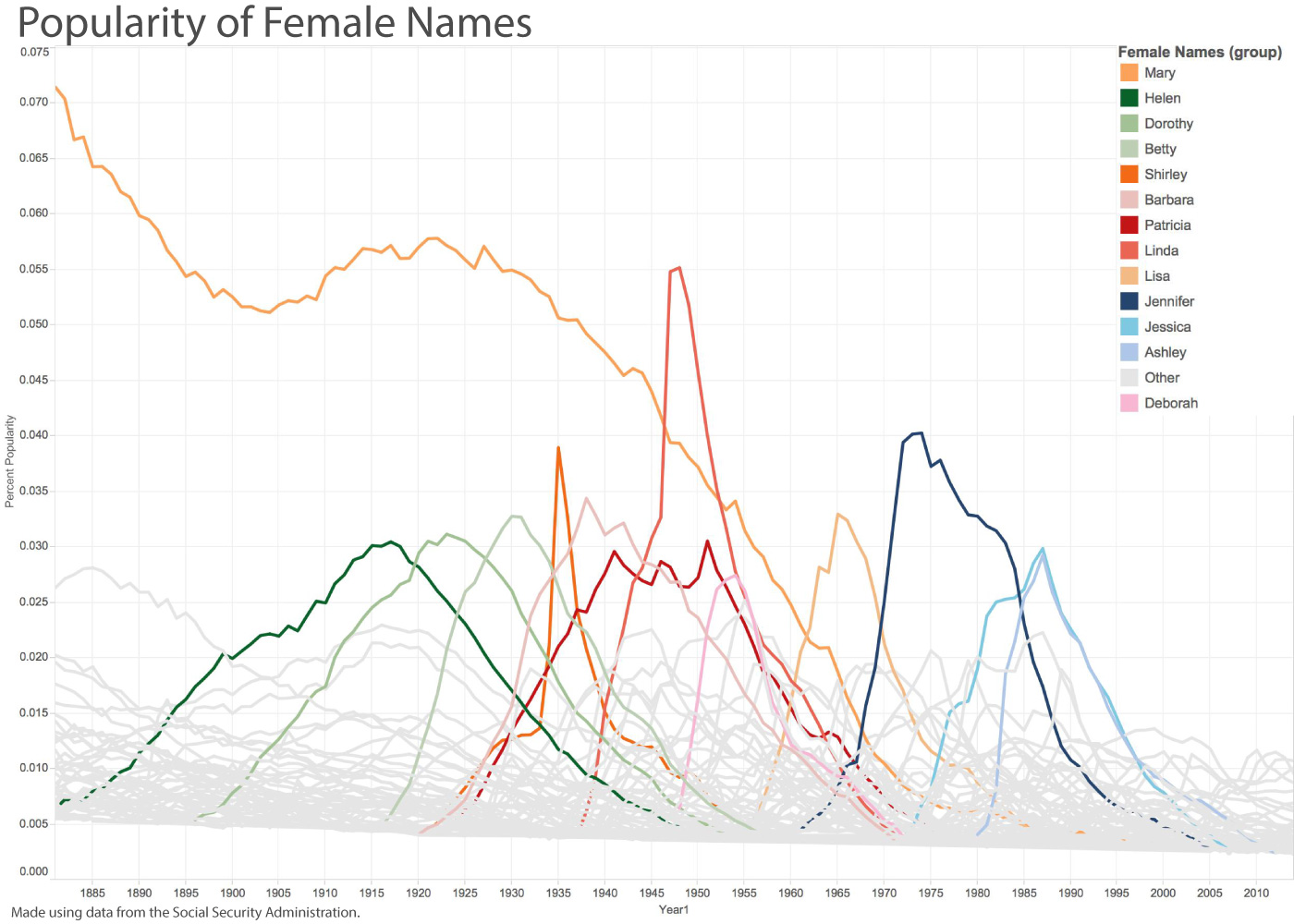 Take Helen, Dorothy, and Betty. They were all very popular names at the time when our (read: Millenials’) grandparents were being born, reaching peak popularity in 1917, 1923, and 1931 respectively. But by the mid ‘50s virtually no one was naming their kids Helen, Dorothy, or Betty. Today, almost all of the people you know named Betty are old, so Betty sounds like a name that only an old person would have.

And it’s not just our grandparents; it’s parents too.

Linda, Patricia, Barbara, and Deborah all probably sound like mom names to you. My mom is named Barbara and she has at least three friends named Linda. But by 1975, all of those names had gone out of style too. As that generation ages, their names will become old people names. Soon the Debbies of the country will be predominantly elderly, as will the Pattys, and those names will sound ancient to future generations.

That means that we can predict which names will someday sound old to us. Jennifer, for instance, enjoyed a huge spike in popularity from 1970 to 1980, but by 2005 it had virtually disappeared. Ashley and Jessica peaked almost in unison in 1987 a few years later, and vanished even faster.

Right now, Ashley sounds like a twenty-something because statistically she is exactly that. Jennifer sounds more mature because most Jennifers are now in their thirties and forties.

The plethora of names has weakened individual trends; we haven’t had a strong female name trend since the ‘90s. And without a significant number of babies with a particular name, we may stop associating certain names with certain generations.

That’s already true for male names to some degree; they don’t go through trends the same way female names do. 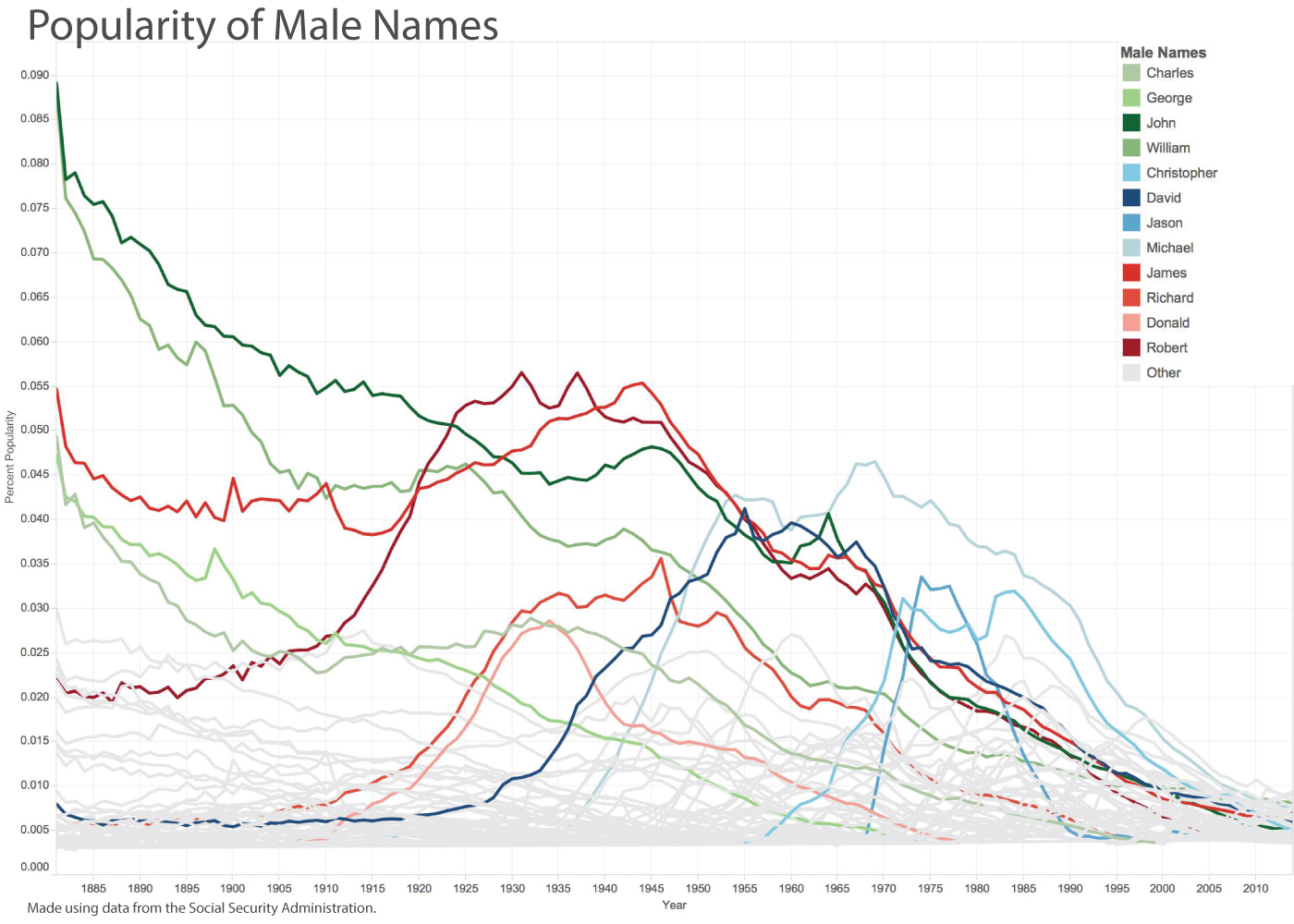 Jason and Christopher both had peaks around the ‘70s and ‘80s, but for the most part male names have experienced a gradual decline in popularity across the board. John and William were once the most popular names by a long shot. Now they are just slightly more popular than other names. Similarly, James and Robert had broad peaks centered around the ‘40s, but their popularity also declined, even though James continues to be a fairly common name.

Without the sharp peaks and drops that characterize female naming trends, we have weaker associations with male names. Robert isn’t a very common name for babies today, but it was popular for so long that you probably know a Robert in multiple generations. Donald, in contrast, went through a distinct trend around the ‘30s. Now it sounds like an old person name.

Perhaps the only female name that underwent a similar trend to male names was Mary. It was one of the most popular names — by a long shot — until the ‘40s. Even though it has since fallen out of favor with parents, Mary doesn’t sound especially old person-esque because it was popular for such a long stretch of time.

The most recent name trends — Isabella, Sophia, and Emma — were each fairly low-key compared to previous spikes, so it’s difficult to tell whether they’ll sound like old people names in 2085. And if the unique name trend continues, everyone will have far more naming options. Hopefully then celebrities can use real names and not fruit (I’m looking at you, Gwyneth Paltrow) — but I doubt it.

Then there’s the flip side of this: “old people names” coming back into style once those old people have passed away (usually after about 3 generations).

This doesn’t always happen — it depends upon the prevailing trends — but it does happen sometimes.