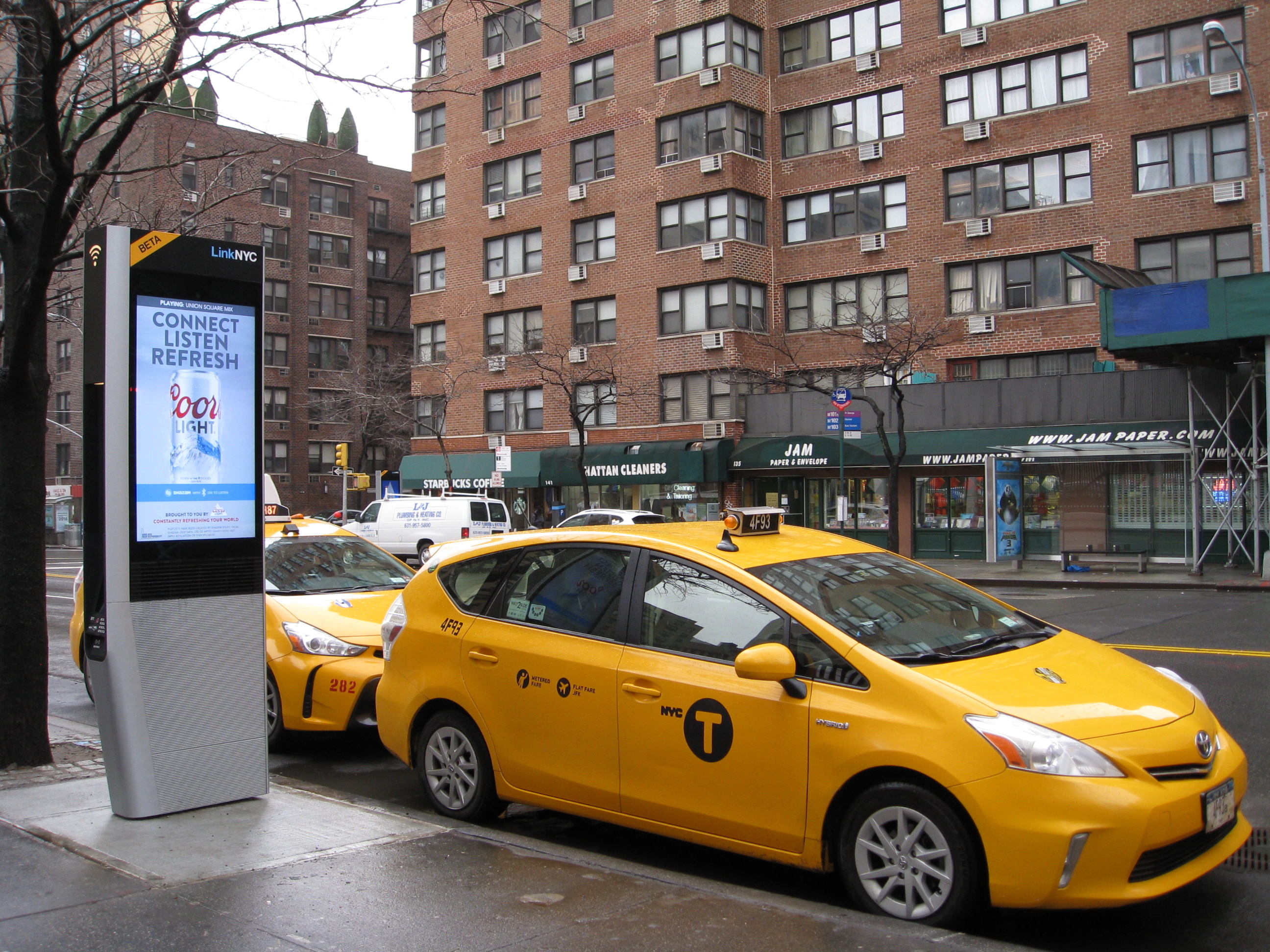 One of the first outposts of LinkNYC, at 15th Street and Third Avenue. [Image credit: Meghan Bartels]

Education in the Age of the Internet

On a cold February afternoon in Gramercy Park, the mayor made a phone call. The small crowd hadn’t gathered around the latest iPhone prototype, but a nine-foot-tall aluminum slab that looked like something out of 2001: A Space Odyssey. Mayor Bill de Blasio was inaugurating the first multipurpose technology kiosk on the streets of New York City, a service called LinkNYC.

LinkNYC will replace pay phone units throughout the five boroughs with standing slabs that broadcast Wi-Fi signal, display ads, connect free voice and video calls, charge USB devices and invite passersby to browse the internet on built-in tablets. It’s neither the first reimagining of pay phones nor the first attempt to bring free public Wi-Fi to parts of the city. It’s not even the first city-wide Wi-Fi, although its predecessor is for city services only.

But no city has ever tried to implement a public network as big as LinkNYC, with at least 7,500 so-called Links to be installed within eight years. The decade-long history of municipal Wi-Fi networks is as patchy as the signal from a neighbor’s router. Networks seem to succeed or fail with equal odds. And although LinkNYC is already broadcasting, New Yorkers still have questions about it. The first, of course, is whether the system will even work; the second is whether it will matter.

“We’re building the plane while we’re in the air,” said Nick Cardillicchio, who has been helping oversee the roll-out for Civiq Smartscapes. Civiq is one of the companies that make up Citybridge, the partnership behind LinkNYC that now has exclusive control over the previously competitive network of old pay phones.

The possibility of public Wi-Fi in New York City first entered the scene a decade ago, during the first big push for municipal wireless networks. Across the country and beyond, “it really was hysteria,” said Michael Santorelli, who is director of the Advanced Communications Law and Policy Institute at New York Law School and worked with the city council on technology issues in 2004 and 2005. But the city ultimately decided not to set up a network as it watched initiatives like Philadelphia’s crumble. Since then, enthusiasm for municipal Wi-Fi largely faded, especially as smartphone users tapped data networks for their browsing needs.

But in 2014, franchising agreements with pay phone providers were due to expire, and the city wanted to do more than just renew the status quo. Keeping phone functionality for emergencies like 9/11 or Hurricane Sandy was crucial, but adding Wi-Fi drew their eye. “It’s not really replacing the pay phone with something different, it’s that the pay phone evolved into a smart public pay phone,” said Ray Mastroianni, founder and co-owner of Telebeam, which managed about 900 New York City pay phones.

Citybridge won the franchise agreement. Manufacturing the towers began only last summer, says Cardillicchio, and the first Link was installed in December 2015. Currently, 98 Links are broadcasting with 41 more installed, all located in Manhattan. More than 500 should be turned on by July across all five boroughs. Each year brings additional milestones; if they are missed, the city claims hefty damages fees.

But while LinkNYC portrays itself as hitting the ground running at gigabit speeds, onlookers worry its quick launch has left weak spots, and not only in its implementation. Privacy is a particular concern, particularly since the system is funded by advertising sold by Intersection, a subsidiary of Google’s Alphabet umbrella company. People tend to get nervous when they think advertisers could see their browsing history. But LinkNYC’s advertisements will appear on the Links themselves, like those of current pay phones, not on individual devices’ screens.

“Our companies all support privacy, but just to be clear, the city absolutely mandates it,” said Cardillicchio. He adds that space in the city is valuable enough to fund the network without personalizing ads to a specific user. “We don’t need your data to drive revenue.” However, Citybridge and the city can use large amounts of general information like age and device type to help advertisers understand who they would reach at a particular Link. “Everything has to be paid for,” said Cardillicchio. “This has to get paid for and this is the best and least painful way.”

LinkNYC is projected by most reports to earn the city an average of $40 million a year, compared to the current about $17 million from pay phones. The city gets a larger proportion of advertising revenue off the Links than it has off traditional pay phones, but that calculation still presumes companies will pay more to advertise on the Links.

Whether any other city could imitate the program if it does succeed is unclear. Experts seem to agree that meeting ad budgets is what will make or break the program and that New York City’s premium ad prices give the project a leg up. Nevertheless, Google has promised 100 free Links to a second city, to be announced in June.

But smaller cities trying to create standalone Wi-Fi networks on their own may face not only lower ad revenues, but also higher installation costs. Because Links replace pay phones, they can simply co-opt the electrical hook-ups and conduits for cable already in place and no longer being used, rather than paying to install a separate set.

But even before installation of the Links is complete, New York City pay phones are once again a monopoly. That hasn’t been the case since the early 1980s, and pay phone suppliers who have lost their franchises don’t like the change. Even before the LinkNYC franchise was awarded, the announcement the service would be a monopoly drew complaints. “To us it didn’t make any sense. Why would you want to go backwards?” asked Telebeam’s Mastroianni. “This is such a powerful network, this should never land in one company’s hands.” He believes competition makes for better service for the public. Telebeam has sued the city to break the monopoly, but a decision may take years.

Then, there are still questions about how free Wi-Fi benefits New Yorkers. “Who is this network for, exactly?” said Esme Vos, who runs a website devoted to analyzing municipal wireless networks.

In particular, LinkNYC claims to address the so-called digital divide: Although New York City is fairly well-wired, there are still plenty of neighborhoods and individual homes without high-speed internet. “We are excited about it because we work with so many students who are in these dead zones,” said Emily Long of The Lamp, which brings multimedia savvy to underprivileged communities. But the system’s legal documents, like those of many websites, ban its use by younger children and restricts its use by older children.

And whether LinkNYC will provide reliable Wi-Fi access indoors isn’t clear yet. The routers guarantee internet up to 150 feet away from the Link, although Cardillicchio says they’re reaching more like 400 feet. But thick walls block signals and routers can’t send internet signals upward.

Nor has LinkNYC promised indoor internet access to New Yorkers. Vos calls that decision a smart move. But within eyeshot of one of the first Links, Cardillicchio confidently declared, “If I lived in any of these buildings, I would cancel my data plan immediately.”

Even outdoor access is complicated. “Okay, this is great, but where are you going to sit?” asked Santorelli. Particularly during bad weather, standing around the Links isn’t very inviting. And with unlimited data plans becoming more common on smartphones, it isn’t clear how much demand there will be for alternatives.

Given the history of municipal wireless, Links may not dot the New York City streetscape for the century that pay phones have. “I think if they get 12 years out of this that’s a success,” said Harvey Jassem, a communications professor at the University of Hartford. “I would anticipate that the technologies would change fairly rapidly and might make whatever this is obsolete.” The city will require the Link technology be upgraded twice during the 12-year contract period, but that might not be enough to keep the network useful depending how internet access trends change.

The physical Link towers themselves might not last the 12 years either. Mastroianni notes the Links are made of aluminum, which Telebeam stopped using on the street years ago because it is vulnerable to salt laid down during winter storms — and to canine and human urine.

Some even question the Link’s core phone functionality. Jassem compares the design, a tablet and speaker built into a pillar, to a hands-free phone unveiled at the 1964 World’s Fair that consumers hated. “They felt like idiots talking to a wall and they wanted something to hold on to,” said Jassem. Even the mayor during his test call looked a little at loose ends, unsure where to look or what to do with his hands. And Mastroianni points out the Links offer little privacy for sensitive calls.

But if the value of advertising in New York City meets expectations, it may not matter how uncomfortable people feel using the phones or whether they tap into the pulsing Wi-Fi running through the streets.

The advertised digital revolution may turn out to be, at best, a digital advertising revolution. “At the end of the day,” said Vos, “what they wanted was to put ads on these fancy billboard thingies.”