Thulium samples, which are likely of no use to their owner [Image credit: W. Oelen | CC BY-SA 3.0]

There are lots of uses for metals. Some can conduct electricity. Some are strong enough for construction workers to stack up logs of them in skyscrapers. Some have cool high-tech applications. Some are magnetic. Some are rare beauties that make jewelry shine. Some are sources of radiation in power plants. Thulium can probably do some of those things. Other elements can do them better. If the f-block were American Idol, thulium would be William Hung.

The f-block has two rows: the lanthanides and the actinides. The lower-level actinides like uranium and americium are all radioactive, and most are man-made; their uses take advantage of those properties. Most have cool stories. Lanthanides like neodymium are all metals with strange properties good for high-tech uses in computers and jet engines. But the lanthanides are a uniform bunch. Their atoms are similarly shaped, and when you find one, you’ll probably find a whole lot of other ones mixed together.

Although thulium is the least common lanthanide found in nature, it is so similar to its neighbors erbium and ytterbium that it’s especially difficult to separate from them. Charles James perfected a method to isolate thulium in 1911 that was developed by Swedish chemist Per Theodor Cleve — a process of boiling, mixing and distilling more like alchemy than chemistry. He started with a chunk of other lanthanide metals and started removing anything he knew how to remove, like erbium and yttrium. He was left with two powders: one of the element holmium and the other of thulium. 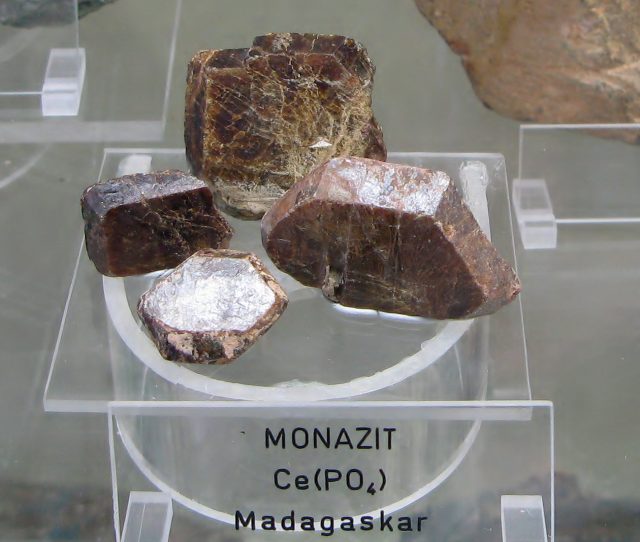 You can extract thulium from monazite ore. Why you’d want to, though, is beyond me. [Image credit: Ra’ike| CC BY-SA 3.0]

Making enough thulium to do anything with can take hundreds of pounds of monazite, a thulium-rich rock, and thousands of repetitions of James’ process. With that, you’d end up with just a few ounces of the element, which is like holding up every bank in town only looking for pennies from just one year for your coin collection. Based on its rarity alone, thulium can cost about $50 a gram (or $320 for this hunk, which you should consider buying for me).

Scientists don’t do much thulium research because of the prohibitive cost and extraction methods. As a result, there are only three main uses of thulium. You can put thulium into a nuclear reactor and turn it into a portable medical X-ray source, you can use it to make lasers in fiber optic cables, and it might possibly make a strong magnet. But there are cheaper elemental substitutes for all of those uses: carbon for the first, ytterbium for the second and our old friend neodymium for the third. 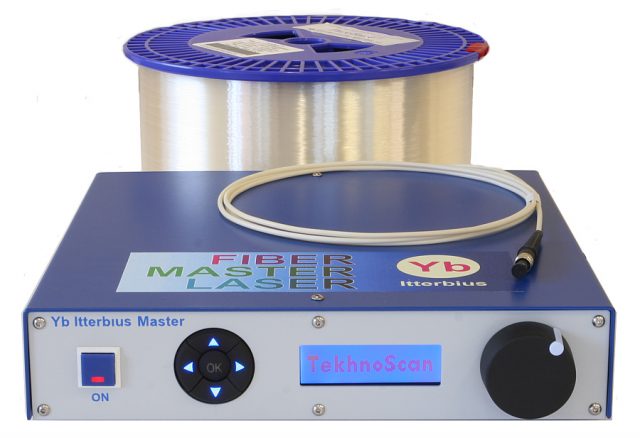 This fiber laser could have been built with thulium, but uses ytterbium instead. The laser company did not consult with me first. [Image credit: Sergey100| Public Domain]

You’d be hard-pressed to find a way to kill yourself with thulium, too. I can’t even confidently tell you not to eat it, even if you were willing to drop a few thousand dollars for an order of thulium nuggets; it’s probably non-toxic. One toxicity label I found for a thulium compound, thulium oxalate, only suggests you call the poison control center after ingestion if you feel unwell. The element is so rare and difficult to isolate into its purist form that there aren’t many situations where it could cause harm.

The message at the nucleus of this post is that some elements aren’t that great. Thulium hits a perfect combination of high cost, hard-to-isolate, and similarity to other elements so that it doesn’t really matter at all.

And I think those facts make it special.