The radioactive element that keeps your home safe 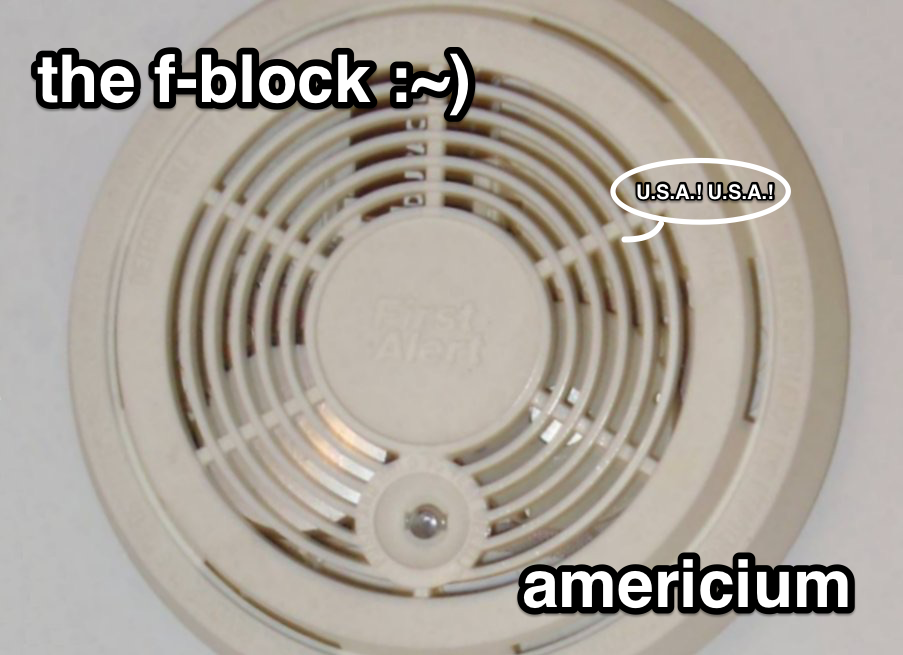 Smoke detectors contain an americium foil that allows them to do their job [Image credit: Oleg Alexandrov | Public Domain]

The periodic table’s f-block elements might seem exotic, but there’s a good chance you have one of them in your house right now.

It’s both man-made and radioactive. It may also save your life.

Americium, element 95, sits next to the explosive and more familiar plutonium. Its radioactivity makes it the key component in many household smoke detectors.

In 1944, Glenn Seaborg, Albert Ghiorso, Ralph James and Tom Morgan began experimenting with plutonium while working on the atomic bomb. They blasted neutrons at plutonium and saw that some of those neutrons spat out electrons and then turned into protons; the extra proton meant the atom’s atomic number increased by one, turning the plutonium atoms into a new element. The team named their discovery “americium” after North America, since it would sit right below europium on the periodic table. Today, manufacturers make a few kilograms of americium every year. 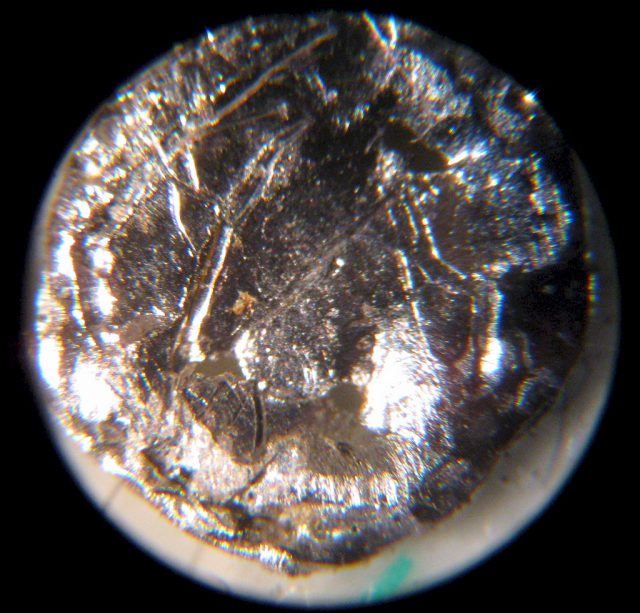 Americium under a microscope [Image credit: Bionerd | CC BY 3.0]

Americium’s radioactivity drives the smoke detecting mechanism in household smoke detectors. A sliver of americium foil sitting between a positively and negatively charged plate inside the detector, shoots out a constant stream of radioactive alpha particles. These particles are bunches containing two neutrons and two protons. And on a regular day, those alpha particles knock negatively-charged electrons off of oxygen and nitrogen atoms in the air. The resulting positive air molecule nuclei are attracted to the negatively-charged smoke detector plate, and the negative electrons are pulled onto the positive plate.

Greedy smoke particles gobble up electrons, stopping the current that normally flows between the two charged plates in the detector, and causing the alarm to go off. Think of americium as a line chef scooping potatoes into mashed potato portions (the protons) and loaded potato skins (the electrons). The restaurant manager would probably sound an alarm too if a fiend snuck in the back door and ate all of the cheesy skins before the patrons got their orders. That’s how a smoke detector works and, I assume, how T.G.I. Friday’s also works.

While americium is radioactive, the amount in a smoke detector isn’t dangerous. From a meter away, the amount of radiation is about a hundred times less than the average radiation you experience just from living on a planet with lots of other radioactive elements. The americium source in the smoke detector is also housed in a little shell to contain the radiation. People who work at nuclear sites could potentially expose themselves to more americium through inhalation or accidental ingestion; in reactors, uranium turns into plutonium, which can then decay into americium. Nuclear weapons tests can also add Americium and other heavy elements to the environment. Ingested or inhaled americium can accumulate in bones, where the radiation damages cells and can cause cancer.

That could also happen if you break open your smoke detector, smash americium’s little protective housing and eat the metal inside, which seems like a lot of work just to snack on radioactive foil. Don’t do that. 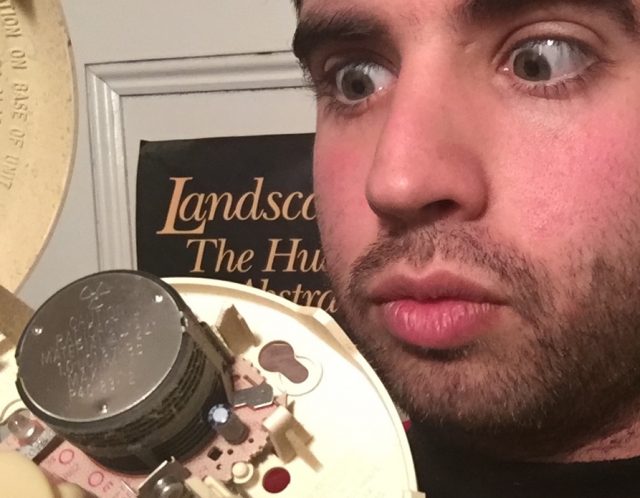 The author holding his own personal stash of americium too close to his face [Image credit: Ryan F. Mandelbaum]

Because it is such a common source of radioactivity, americium has been at the center of scandal. As a boy scout, Michigan resident David Hahn collected lots of americium from smoke detectors and used it to try to build a nuclear reactor in his backyard in 1995. Things didn’t turn out great for him; the U.S. Environmental Protection Agency and Nuclear Regulatory Commission broke up his operation and declared his garage workspace a Superfund site. And in 2007, he was busted again for stealing more smoke alarms. Don’t do that either.

Use this article as an opportunity to test your smoke alarm’s batteries and thank americium for keeping you safe from house fires.