A whole kingdom to thank for more than just mushrooms 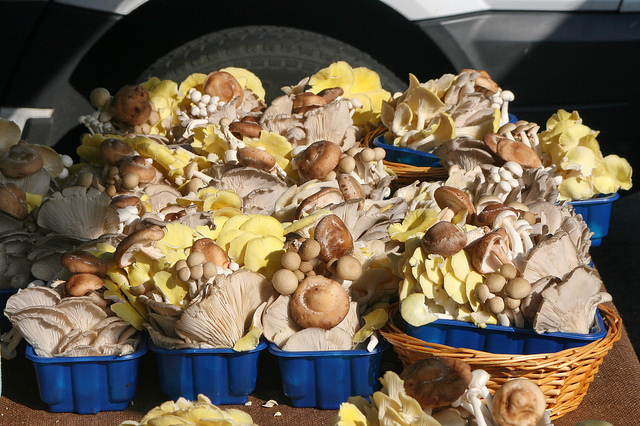 Mushrooms are a popular farmers’ market staple. But they aren’t the only fungi you’ll find in your foods. [Image credit: cliff1066 | CC BY 2.0.

The Snacks You Used to Step On

The circle of mold

Unless portabellas or porcinis are on the menu, the thought of eating fungus is a little unsettling. But the surprising truth is that we’d miss some culinary delights if we turned up our noses at all fungi. Here’s where fungi are lurking on your plate. 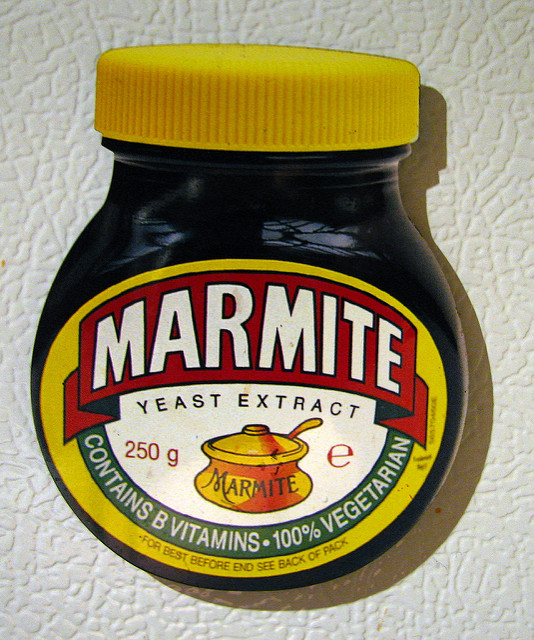 Marmite, the English spread that uses the tagline “love it or hate it” in its advertising, is known for eliciting strong reactions, but they usually aren’t about the fungi inside. [Image credit: Alex Juorio | CC BY 2.0]

The organism responsible for bread and beer — yeast — is one of the most easily recognized fungal chefs. What you may not know is that yeast can also be broken down by high amounts of salt to create a compound similar to the much-maligned monosodium glutamate, or MSG. Praised as a source of vitamins, this yeast-derivative gives food the savory, filling flavor known as umami. You’ll see it on soup labels as autolyzed yeast or hydrolyzed yeast.

The common British spread Marmite is also processed yeast and has been described as tasting like “the flavor packet that comes with beef flavored ramen” or “salty beefy fermented soy sauce.”

Blue cheeses like Stilton are named for the blue fungus running through the cheese. [Image credit: Designgeist | CC BY 3.0]

Bacteria are the key microbes to thank for cheese. But in certain types of cheese, bacteria get a little help from fungi. Blue cheeses like Roquefort owe their characteristic blue veins to Penicillium fungi. Like the fermentation of beer and cheese itself, the discovery of the joy of moldy cheese is believed to have been a happy accident, the result of someone leaving food or drink in a cave and being brave enough to taste it when they came back to it.

Other mold-ripened cheeses, such as Camembert, stand out for their rinds, which are actually dense fungal webs. Whether you share this information with fellow guests at the next reception you attend is your call. 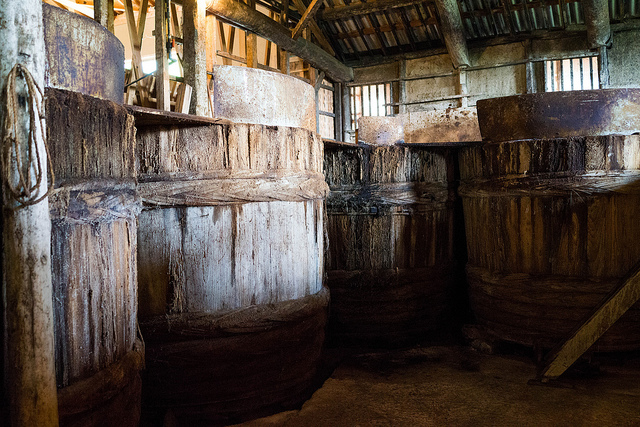 During the production process, soy sauce is left to ferment in traditional wooden vats. [Image credit: Joi Ito | CC BY 2.0]

Traditionally soy sauce is made through a three-step process. The first is to combine soybeans, wheat, and fungus using a ratio that’s a trade secret for each producer. The mixture stews for three days, giving the fungus time to coat the grains with yellow mold. The mix is then fermented in brine and strained to create the familiar sauce. Different types of soy sauce are made by adjusting the ratio of soy to wheat, changing the fermenting time, and other recipe tweaks. If that isn’t to your taste, you can opt for non-brewed soy sauce, which is the result of boiling soybeans in acid. Tempeh, sake, and miso, other staples of Asian cuisines, undergo similar processes, the latter two with the same Aspergillus oryzae fungus. 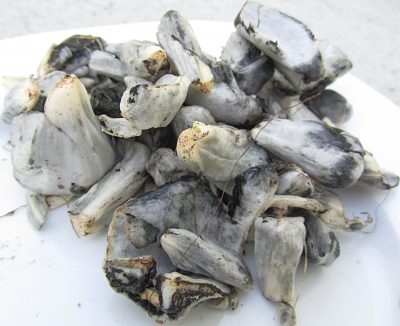 During Mexico’s rainy season, water occasionally manages to penetrate protective corn husks and reach individual kernels as ears are growing in the field. The Ustilago maydis fungus hitches a ride into the kernels and makes them swell and turn gray.

Huitlacoche may not look appetizing, but it’s a local delicacy, nicknamed Mexican truffle and often baked into quesadillas. In fact, farmers inject spores into growing corn ears to increase the likelihood of kernels becoming infected. Huitlacoche is less popular in the U.S., where it is still typically called corn smut as if it were a disease, although some foodies are working to improve its reputation. 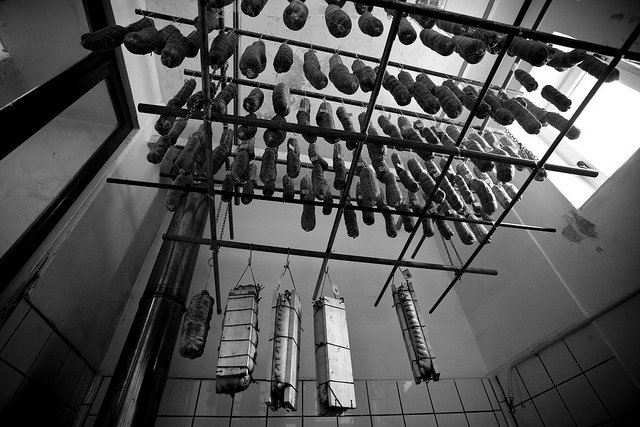 If you buy traditionally-made hard salami, it may be covered in a thin layer of powdery white mold — but that doesn’t mean you need to throw it out. Salami makers purposely include a safe species of mold in the meat mixture. It actually protects the meat by keeping out other molds that aren’t so kind. It also helps flavor by keeping the meat from getting too acidic and makes sure the meat dries evenly so that it doesn’t rot. Although the strain chefs add is safe to eat, the U.S. Department of Agriculture recommends you wipe the mold dusting off the outside of the salami to be on the safe side. And food safety regulations are making it harder for salami makers to use this technique, called dry-cure. It’s easier to monitor temperatures than the warning signs trained salami-makers recognize, so regulators would rather chefs cook the meat instead.

At the beginning of 2015, scientists announced they had discovered a previously unknown species of fungus in salami. They named it Penicillium salami in the food’s honor. They aren’t worried about it being dangerous, but they want to do more research to see whether it’s another example of a fungus hard at work making our meals tastier.

Thank you for this website, I successfully used it for my science during lockdown. Well done .