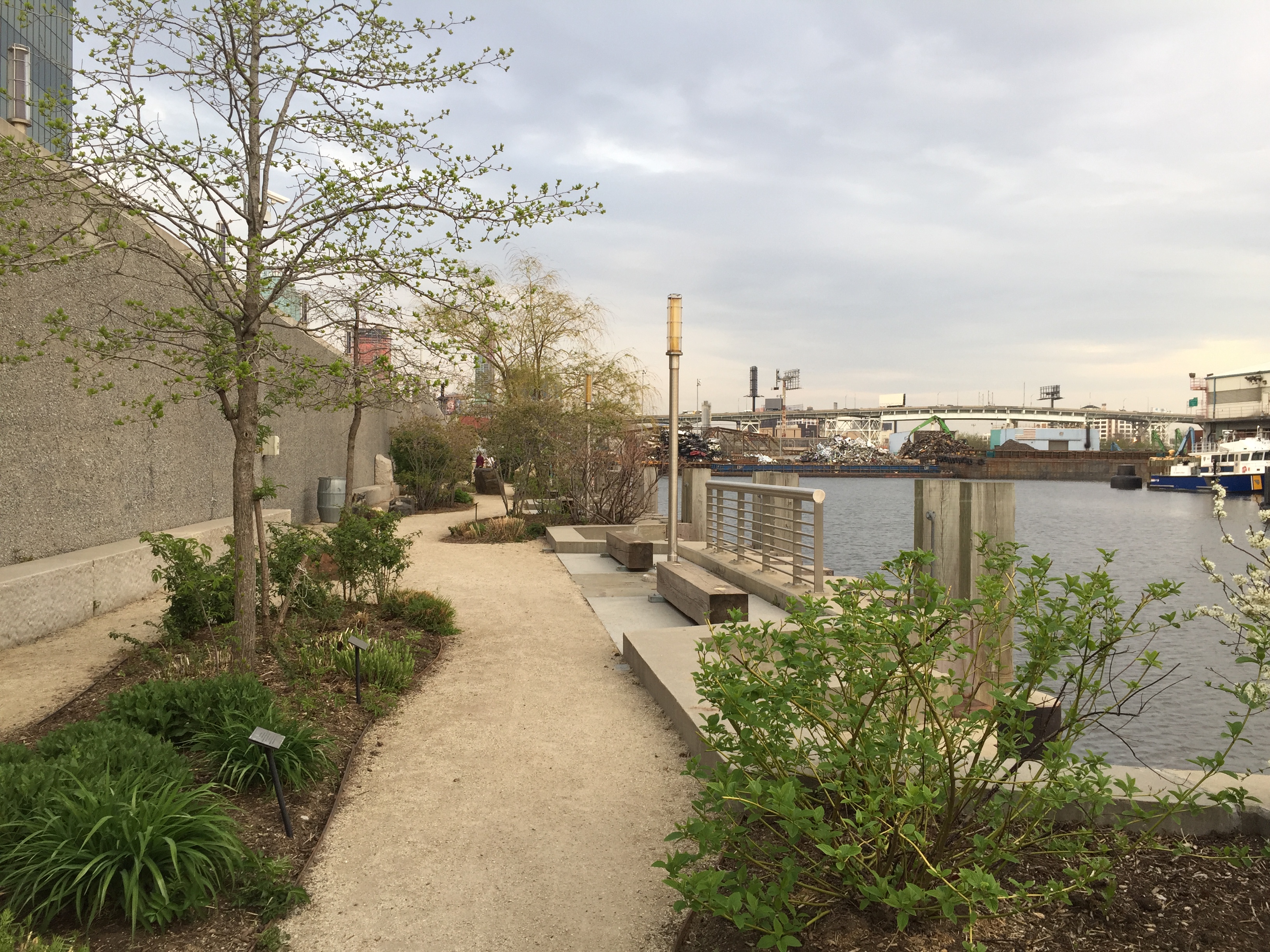 Firmly rooted in its neighborhood’s industrial past, Newtown Creek Nature Walk represents the kind of green space both longtime residents and new gentrifiers can live with. [Image Credit: Knvul Sheikh]

The “meadow” in this modest waterfront park is mostly gravel, interrupted by a few scraggly trees and short shrubs. But to longtime residents of Greenpoint, Brooklyn, the gritty vibe feels right.

Dubbed the Newtown Creek Nature Walk, the park shares a wall with a huge sewage treatment plant. Yet it is the park where teenagers come to skateboard after class and where community activist Laura Hofmann and her friends gather to catch up on long sunny days.

Hofmann, who’s lived all her life in Greenpoint, leans back against a stone bench, red glasses perched atop a short crop of salt and pepper hair, and smiles. “The Nature Walk helps soften the edges around Newtown Creek,” she says. “But we decided from the start that it wasn’t going to be one of those very green places.”

While cities across the U.S. are racing to get greener and more sustainable, some people in Greenpoint are actively working to prevent the area from becoming “too green.” Neighborhood improvements like roadside trees, bike lanes and plant-festooned buildings are great, says Hofmann, but they also attract more financial investment and more people.

As new businesses move in and luxury condos pop up, environmental makeovers can displace the low-income residents who need these improvements the most. Hofmann and her compatriots are trying to preserve the neighborhood’s industrial heritage and jobs instead of succumbing to the influx of parks, cafes and condos stereotypical of what urban ecologists call environmental gentrification.

Most frequently, environmental gentrification happens as a result of rezoning, or the recognition that old industrial sites can be molded into hip neighborhoods, says Winifred Curran, an urban geographer at DePaul University in Chicago. “In a post-industrial economy, waterfronts are no longer valuable for industrial use, but they have become amenities in and of themselves,” she says. “So developers look for ways to tap into that.”

In the predominantly Hispanic neighborhood of Pilsen in Chicago, for example, the shutdown of a coal-burning power plant was used to attract high-income residents to a shiny new upscale apartment complex. This resulted in rent increases where more affordable housing options were already needed, according to Curran.

In New York, the High Line in Manhattan is a high-profile example of eco-gentrification. In June 2005, areas around the former elevated railroad were redefined from manufacturing zones to those allowing mixed commercial and residential use. The High Line became a dazzling new park, attracting billions of dollars in new development and raising nearby property values by 103 percent between 2003 and 2011.

Greenpoint was similarly rezoned in 2005. But instead of sprawling new parks and apartment complexes, community members and activists took a “just green enough” approach, insisting on a small park along Newtown Creek that matched the local personality instead of catering to outsiders or developers. While city officials plan to create nearly 50 more acres of new playgrounds, parks, and esplanades along the East River waterfront, local organizations and activists want the Parks Department’s master plan to take the needs of local residents into account.

Community involvement in Greenpoint is key to striking this delicate balance. Everyone likes a cleaner, safer neighborhood, says Hofmann. Green space filters pollution, attenuates noise, provides shade and affords a sense of peace and tranquility. But before getting green space, she says the neighborhood needs to focus on basic environmental cleanup.

Now a Superfund site, the historically Polish immigrant neighborhood was the unwitting home of a massive oil spill that dates back to the 1970s at least. The U.S. Coast Guard discovered a large plume of oil flowing out of the banks of Newtown Creek in 1978. But virtually no action was taken until 1990, when the state government ordered Exxon Mobil to clean up the spill. Hofmann, who still remembers the smell from the oil growing up, has been campaigning for a cleanup of Newtown Creek ever since. And though the contamination was largely cleaned up, community activists discovered an oil plume again in 2002. So in 2004, Hofmann played a central role in raising a federal lawsuit against Exxon Mobil, BP and Chevron. “I was always involved in the community in one way or the other,” she says.

Gentrifiers, too, have a role to play in improving neighborhoods, says longtime Newtown Creek activist Mitch Waxman. Young artists, activists, and urban professionals may be more aware of certain environmental issues and more inclined to speak up than older residents who come from underprivileged or minority communities. Combining their strengths with those of longtime residents can increase the community’s general political influence, he says. “Together we can get things done.”

By pushing for desired visions of the city together, Greenpointers have been able to focus on more than just trying to make their neighborhood prettier. “It’s about environmental and economic justice,” says Mike Schade, who moved to Greenpoint eight years ago. “I feel like I have a responsibility as a resident to contribute and hold polluters accountable,” he says. “And as someone who didn’t grow up in this neighborhood, I’m always thinking about how I may contribute to the gentrification as a young, white male.”

Redevelopment does not have to lead to rampant inequality, says Sarah Dooling, an urban ecologist at the University of Texas, Austin. And not every sustainable project needs to be designed to favor new residents or be concentrated in one gentrifying area, she adds. “We gotta spread it around.”

Instead of a grand waterfront plaza dotted with high-end boutiques and energy-efficient buildings, a “just green enough” approach might emphasize small-scale community gardens. Smaller parks and playgrounds can be tailored to fit the needs of current residents. Greenpoint, for example, could use more open spaces, especially along Newtown Creek, which has traditionally been blocked off by factories, says Waxman.

Waterfront parks would also let people monitor the Creek and keep an eye on current cleanup efforts. That was one of the main reasons why the Newtown Creek Nature Walk was designed the way it is, says Hofmann. Three other parks, spaced several blocks apart, provide similar open spaces where people can walk their dogs, kayak, or just relax and hang out by Newtown Creek. Development of two more similar oases is underway, according to the city Parks Department.

The city government has also promised to protect the industrial area that surrounds these parks. In 2006, two Industrial Business Zones were established in Greenpoint to protect existing manufacturing districts and foster industrial growth. Residential condos can’t be built in these zones, although some of the small parks may be squeezed in between the factories. “If you don’t have this zoning protection then the gentrification pressures are even greater,” says Trina Hamilton, an associate professor of environmental politics at the State University of New York in Buffalo.

Just as the city makes specific decisions to rezone certain areas, making more affordable housing broadly available can be another way of counteracting gentrification pressures, says Hamilton. This isn’t the focus in Greenpoint, though there are some apartment buildings that are part of the city’s housing voucher program.

The “just green enough” approach is about rethinking who really benefits from environmental remediation, says Hamilton. Through community involvement and alliances with veteran local activists and concerned new residents, as well as the city government, Greenpoint is seeking a sweet spot in between shiny eco-projects and maintaining jobs or rent subsidies. Along the way, they’re constructing an alternative vision of what “green” looks like — one that involves all stakeholders.