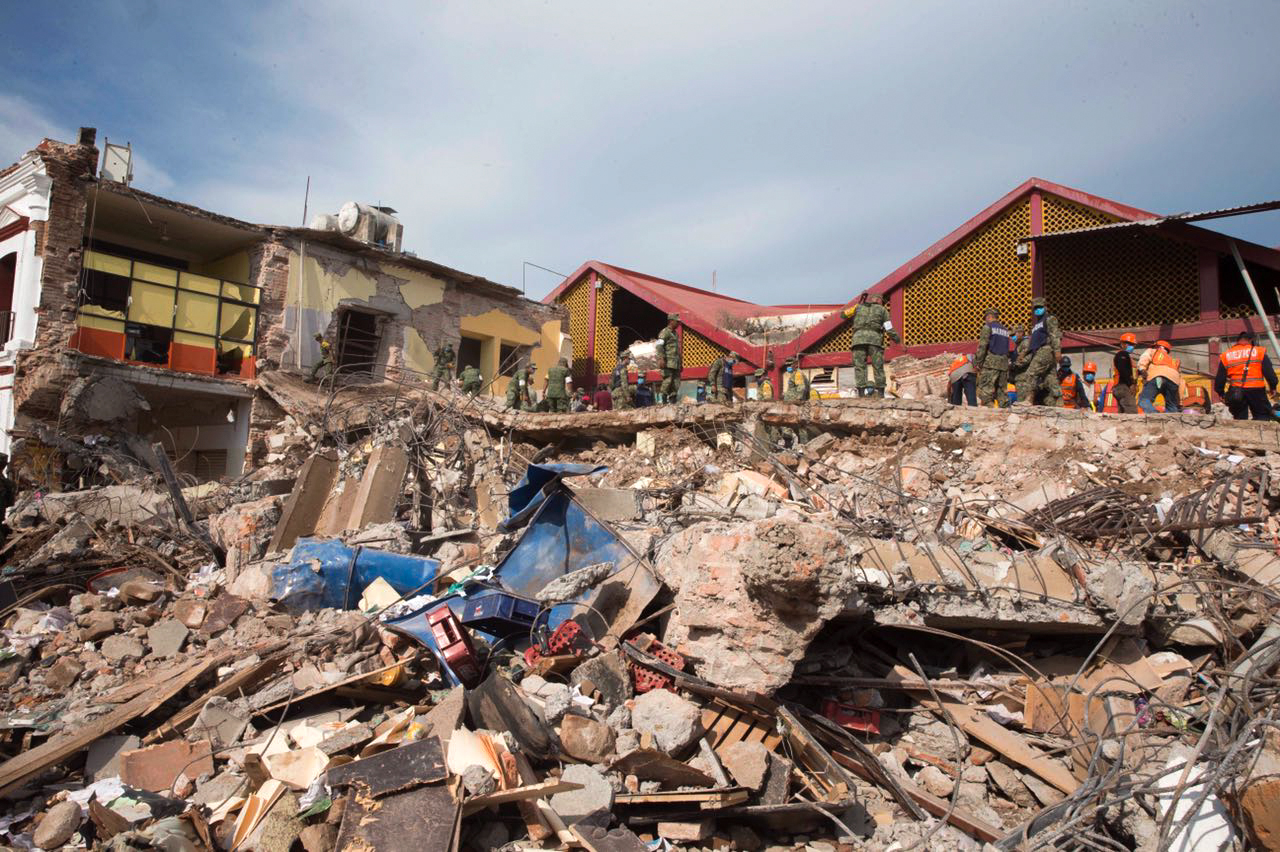 The idea of using ‘magnitude’ to measure the size of an earthquake originated with seismologist Charles Richter in 1935. Today, the original Richter scale has been replaced with the moment magnitude scale, a more precise logarithmic measure of the amplitude of seismic waves. [Flickr, Presidencia de la República Mexicana | CC]

In the early morning hours of October 16, 1999, a 7.1 magnitude earthquake rattled California’s rural southeast, waking people in their sleep. The quake derailed a passenger train, but no one was seriously injured. There were no fatalities. The incident made the papers the next day but the quake’s effects were minimal.

On September 19, 2017, an earthquake of the exact same size swept through central Mexico, killing 369 people. The government declared a national emergency. At least 38 buildings in Mexico City collapsed and many more were severely damaged. The earthquake was the deadliest the country had seen in 30 years and occurred on the anniversary of the 1985 earthquake that killed more than 9,000 people.

What makes an earthquake fatal instead of a nuisance? It isn’t just size – as the California 1999 and Mexico 2017 earthquakes show, two earthquakes can be the exact same magnitude and have very different effects. Once an earthquake forms, two elements control how it is felt on the surface: depth and soil.

Earthquakes occur at fault lines, which form where the rocks that make up Earth’s crust come into contact with one another. Large faults, like the San Andreas near California, mark the boundary of two tectonic plates. These plates want to move, reshaping Earth’s surface over the course of time, but have a hard time sliding past one another. Over thousands and millions of years, these movements create mountains, valleys and even supercontinents. As the plates struggle to move, tension builds along faults. When it gets to be too much, rocks break, the plates move and waves of energy ripple through the ground. We experience these seismic waves as the ground moving up and down beneath us – in other words, as an earthquake.

Pat Manley, a professor of geology at Middlebury College, says the first thing she does when she hears about a new earthquake is check its depth. In general, if an earthquake occurs deeper in the earth, for example at 125 miles or below, the waves probably won’t shake the surface very much. If the earthquake is shallower, however, say at just six miles beneath the surface, “that’s probably going to cause some damage,” she says.

“Soil behavior” in the “upper 300 feet” of the planet’s crust also determines how much seismic waves will ultimately move the surface, says Ruth Harris, a seismologist at the U.S. Geological Survey. Seismic waves can travel more easily through loose soils and sediments than through solid rock. Moving through inflexible rocks can cause the waves to lose energy and result in less shaking on the surface. Loose soils, in contrast, actually amplify seismic waves, according to Manley, and cause even more shaking on the surface.

Taken together, depth and soil give each earthquake its unique impact. For example, the 1999 California earthquake was relatively shallow, whereas the 2017 Mexico earthquake started much deeper, says Harris. Looking just at the depth, you might assume the California earthquake was more dangerous. But Mexico City is built on an ancient lakebed. Instead of sitting on hard rock, the entire city rests on relatively loose sediments. This makes the city particularly susceptible to earthquakes. It also causes other issues, like the gradual sinking of the land as residents deplete groundwater under the city. The waves in the 2017 earthquake moved through those loose soils deep beneath Mexico City, causing more movement on the surface and leading to a deadly event.