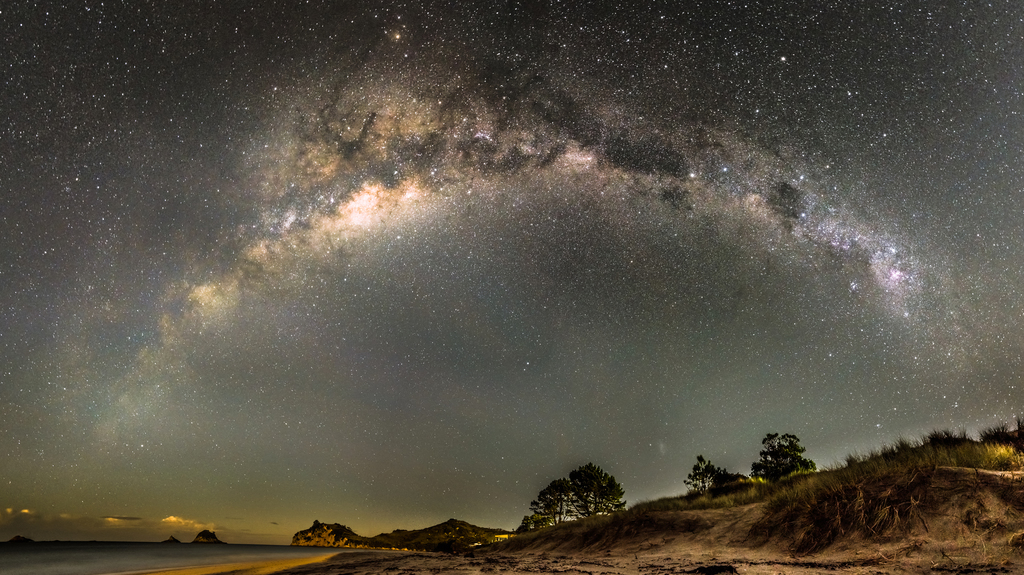 A panorama of the Milky Way over the Coromandel Peninsula in New Zealand [Credit: Tom Hall | CC 3.0]

Note to Science: Philosophy is Your Friend

Does a theory of everything exist?

Alan Lightman doesn’t use email. To connect with him is an entirely analog experience: You might hear his voice — sonorous with a slight southern drawl — speaking to you across a classroom or lecture hall, or you might read his words as he grapples with his lifelong quest to reconcile the physical and the intangible.

Idiosyncratic perhaps, but also fitting for a man who has spent his life at the often orphaned intersection of science and spirituality.

“I’m trying to reconcile myself as a materialist with certain transcendent experiences I had that seem to be irreducible,” Lightman told a crowd assembled at Red Hook’s Pioneer Works on September 30th to hear him speak about his latest book, Searching for Stars on an Island in Maine.

The book is a series of ruminations on science and spirituality, sparked by a transcendent experience he had one summer night gazing up at the stars in Maine: “I felt like I was dissolving into the sky, like I was falling into infinity,” he told the crowd. “The vast expanse of time long before I was born, long after I was gone, seemed compressed to a dot.” In a series of 20 essays, he meanders through topics big and small, with forays into everything from the vast subatomic emptiness of which we are all composed, to language, quantum gravity and death.

Lightman, the first person to be granted a joint appointment in science and the humanities at M.I.T., has spent his career alternatively quantifying and marveling at the vast and sometimes immeasurable reaches of the physical world. As an astrophysicist, he studied how the force of gravity behaves under relativistic conditions and contributed to our understanding of stellar processes under extreme temperatures and densities. He made a name for himself as a novelist in 1993 with Einstein’s Dreams, a surrealist journey through the nighttime reveries of the father of relativity as he comes to terms with a new understanding of space and time.

Though this new book steers clear of fiction, it maintains the same sense of wonder at the natural world, at the incongruity of certain ineffable experiences and emotions living side by side with the desire to find the rules that govern our universe. This time, Lightman takes aim at the slippery boundary between science and spirituality, and in so doing joins the ranks of many prominent scientific thinkers before him. Some say the boundary barely exists, as the late Carl Sagan mused in his book The Varieties of Scientific Experience: “In this sense of seeking the deepest interrelations among things that superficially appear to be sundered, the objectives of religion and science, I believe, are identical or very nearly so.”

To others, the division between physics and metaphysics shines brightly. Philosopher Karl Popper argued that science is the purview of the purely falsifiable, meaning that anything we can’t design an experiment to prove or disprove has no business being called science. But what if we’ve begun to come up against the limits of what is possible to test in an experiment? Is a natural law any less true because we are not equipped to measure it here on earth?

Lightman does not draw such a sharp line between the two realms. Throughout the book, he builds his case through the juxtaposition of what he calls “the Absolutes” and “the Relatives.” The Absolutes are “ethereal things that are all-encompassing, unchangeable, eternal, sacred,” he writes, and belief in them comes from “internal experience, or sometimes from received teachings and culture-granted authority.” They have not been proven, nor can they be.

Lightman’s Relatives, on the other hand, come from “experiment with the external world,” and are described as “the relativity and impermanence and multiplicity found by modern science.” They may sound like two entirely different ways to perceive and understand the world, but Lightman doesn’t believe they are.

We have reached for science as a tool to confirm the absolute truths of our hearts, he explains. Instinctively we turned to the very large and the very small, perhaps because the scope of human experience is so squarely in the middle, assuming “truths” such as the indivisibility of atoms and the eternality of the stars. But “science has shown us that many of the things in the physical world that were taken as symbols of the Absolutes are not really absolutes. Everything is impermanent. Everything is divisible,” Lightman says. So if we know that atoms disintegrate and stars burn out, that even time is relative, are we to be left entirely unmoored in a sea of scientific relativism?

Not quite, Lightman says, because science itself operates on faith, on its own set of absolutes: “the idea of a lawful universe is itself an Absolute,” Lightman writes. Scientific inquiry operates of the fundamental assumption that the laws of nature are the same across space and time, that physical constants will be forever constant, whether measured on earth today or in the farthest reaches of the observable universe a billion years ago. “You really can’t do science at all unless you make that assumption,” Lightman says. “That’s an absolute. I call it the central doctrine of science.”

The Absolutes of spiritual thought, then, have crumbled under the scrutiny of science, which in turn has built its edifice on a fundamental assumption that cannot be proven: “Ironically, we have traded one constancy for another.”

Has science, then, entirely edged out spirituality as a means of making sense of the world? Lightman doesn’t seem to think so. Asked by an audience member if science today is impoverished by a lack of spirituality, he leaves us with the sense that science alone will never satisfy our need for answers: “The greatest question of all that can be asked is: ‘Why is there something rather than nothing?’ And I don’t think that science can touch that question.”