In 2015, a study out of San Francisco estimated one-third of sexual assault cases involve date rape drugs. Here's how to protect yourself and your friends

The symptoms of date rape drugs are similar to those of being drunk, which can make it hard for you to tell if you’ve been drugged. [Credit: womenshealth.gov]

#MeToo  advocates have sent a clear message: survivors are never to blame for being sexually assaulted — no matter whether they were sober, high or drunk at the time.

That being said, knowing how to recognize whether your drink has been drugged — and how to prevent your drink from being drugged in the first place — can protect you and your friends against potential sexual abusers.

Reliable statistics on the prevalence of date rape drugs are hard to come by because incidents often involve memory loss, so a victim may not know that they’ve been sexually assaulted. One 2015 study in San Fransisco estimated one-third of sexual assault cases involve date rape drugs; a 2005 UK study put the figure at two percent. Because residues of date rape drugs leave the body quickly, they are often gone without a trace before a potential victim gets tested.

The term “date rape” is a misnomer for several reasons. The assailant could just as well be an acquaintance or a stranger. And the assault can include any kind of unwanted sexual touch, not just rape.

Typically, abusers spike a victim’s drink when their back is turned. The drugs weaken the victim or knock them out, making them unable to give consent or resist the assault. The three most common date rape drugs are Rohypnol, GHB, and ketamine, which go by the street names roofies, liquid ecstasy and Special K, respectively. Here’s more information about them, based largely on material from womenshealth.gov, a project of the U.S. Department of Health and Human Services: 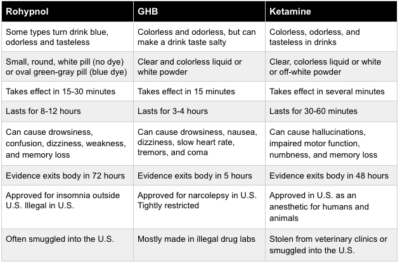 The symptoms of all three drugs can be similar to alcohol. That means if you’re drinking, it can be difficult to tell if you’ve been drugged. One sign that you may have been drugged is feeling extremely drunk in a short period of time, especially if you haven’t had much to drink yet.

To help people detect drugs that might otherwise fly under the radar, some companies have begun selling products that identify whether a drink has been tainted. At least two products are on the market that detect drugged drinks: drink coasters and a device that works like a pregnancy test for your drink. Several others are in the works, including a napkin that detects at least 26 drugs.

Although these strategies may seem promising, some people have criticized them for being too impractical, costly, or putting too much onus on potential victims. For instance, while the coasters cost only 85 cents each, they can’t be reused. Neither can the “pregnancy tests,” which cost $35 for five tests. And these devices don’t detect all types of date rape drugs. The coasters only detect GHB and ketamine while the “pregnancy test” test does the opposite, testing for several others but leaving these two out.

Instead of relying on technology, there are some simple steps you can take to protect yourself, according to San Francisco Women Against Rape, a support and advocacy group:

If you think you may have been drugged and sexually assaulted, head to the hospital immediately without peeing, bathing, washing your hands, changing clothes, eating or drinking. Ask the hospital to take a urine sample to test for date rape drugs.

If you believe that you have been sexually assaulted, with or without drug involvement, you can call the National Sexual Assault Hotline at 1-800-656-HOPE.

And never forget: The drugs you take knowingly can make you vulnerable, too. The most common drug associated with sexual assault isn’t roofies, liquid ecstasy, or Special K, according to a 2017 study. It’s alcohol.

So, if you’re going to drink or take drugs, do it as safely as possible. Remember that sober friend you’re asking to watch you for date rape drug symptoms? That friend can also help to make sure you make it home okay, even if the only drugs in your system are ones you want to be there.

we are not sure if my wife was date-raped. she disappeared with a man whilst in a bar which hopefully she wouldn’t do normally. she remembers feeling in a loving mood. I met her 2 hours later and she was on her own, sober and lucid. she hasn’t had any flashbacks since the incident but remembers strangely feeling bad about her dress and cannot wear it again. any idea if this could have been date rape and what would the drug possibly have been?