Reading the Quran with ‘green glasses’

How one religious leader finds environmental roots in Islamic tradition 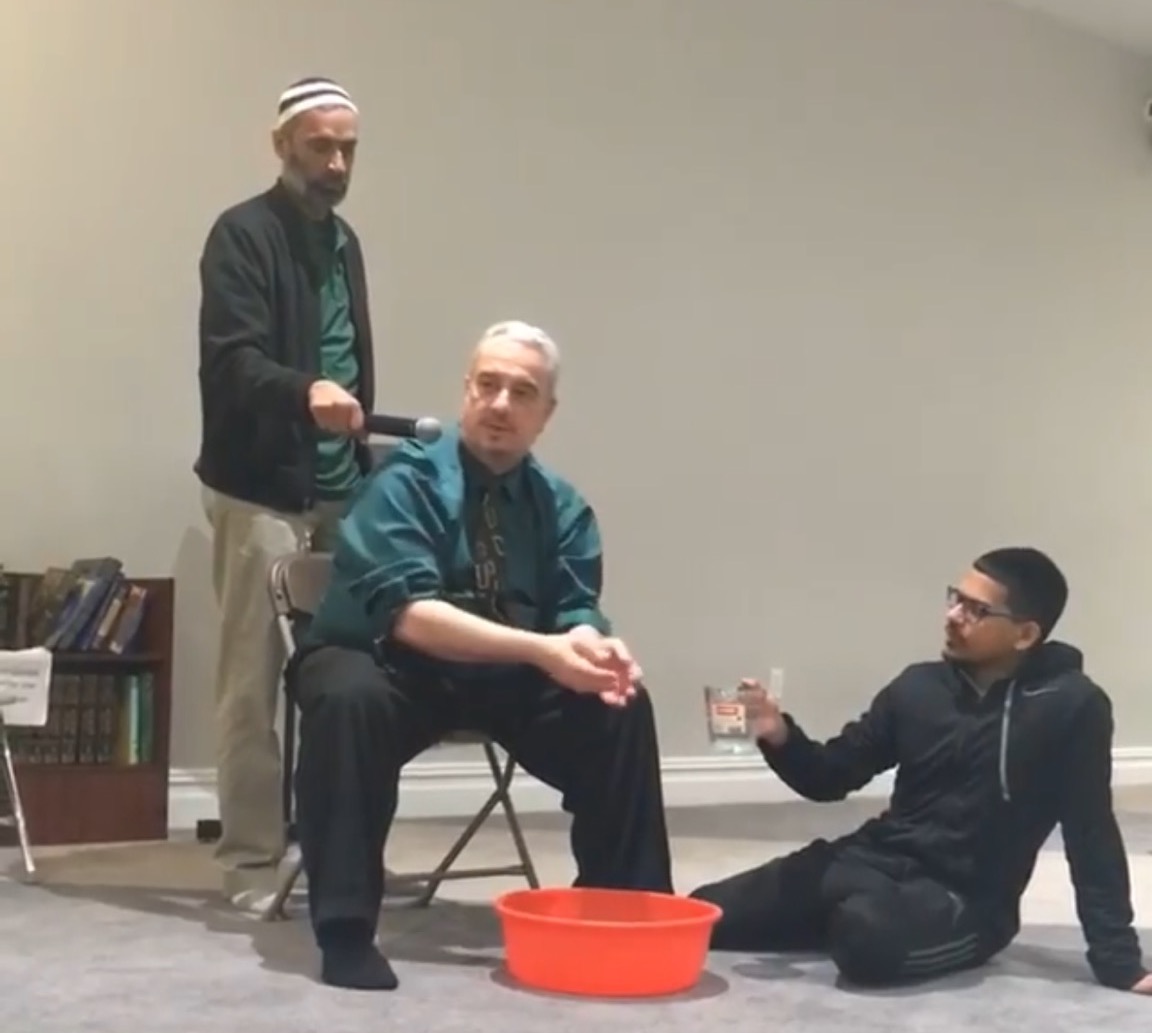 Saffet Catovic (center), an imam and environmental activist, demonstrates how to reduce water use when washing before prayer. [Credit: Saarah Latif]

When the light streams through the four large windows of NIA Masjid & Community Center, it casts an intricate pattern onto the prayer room floor. These exquisite windows, whose designs pay tribute to Spanish influence, are one of the mosque’s “green” features. They let light inside and reduce the need for artificial lighting. Just outside this haven, though, is the heavily polluted city of Newark, New Jersey.

For Saffet Catovic, a 55-year-old imam (Islamic worship leader) and environmental activist, both the mosque and the city are sacred spaces. At a “Green Ramadan” event just weeks before the Muslim holy month of fasting and prayer, Catovic urged the 65 congregants in attendance to respect the environment as they would their own mosque. 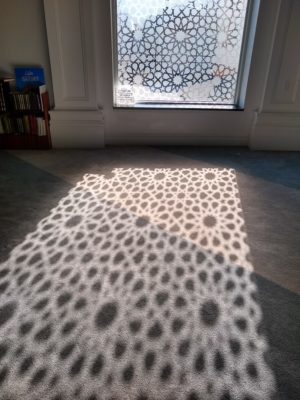 Sunlight streams through the windows of NIA Masjid & Community Center, a mosque in Newark, N.J. Diagonal stripes on the floor help congregants orient themselves toward Mecca. [Credit: Laurel Kearns]

“The month of Ramadan is when we as Muslims get our Muslim up,” Catovic tells the crowd in a clear, emphatic voice as he urges them to practice eco-consciousness. “We get to put something in practice for 30 days, and it becomes a habit for the rest of the year.”

Later in the evening, he rolls up the sleeves of his green button-down shirt to demonstrate a new habit: washing oneself before prayer with only two cups of water instead of gallons.

This year, 1.8 billion Muslims around the world observed Ramadan during the month of May. People refrained from eating until sunset, breaking their fast only when the sun disappeared behind the horizon. Some mosques provided iftar, breakfast meals, to congregants. Typically there’s a lot of waste.

“Some mosques will serve 1,000 meals a night for 30 days,” Catovic explained during a phone call before the event. The meals are meat-heavy, which means that the environmental impact is great. Meat production makes up nearly one-fifth of total human-produced greenhouse gases.

“It’s a significant amount of food served with good intentions, but the food shared is not locally produced, grown or harvested,” Catovic says. The meals are served in styrofoam containers, which Catovic describes as “one of the deadliest things individuals do to the environment on a daily basis.”

The community center stopped using styrofoam last year, according to Saarah Latif, who organized the “Green Ramadan” event. “If we as Muslims can work to produce less waste — use reusable bottles, use reusable plates — during the month of Ramadan,” Latif says, “imagine how much waste we could be reducing.”

Catovic explains that the holy month is an especially apt time to evaluate use and waste: “A lot of Ramadan is connected to food and ethical eating,” he says.

For Catovic, thinking about nature began when he was a child in Teaneck, New Jersey. He grew up gardening and camping. His father, an immigrant from Bosnia and Herzegovina in former Yugoslavia, was an imam himself and later a biology professor. He taught Catovic  from an early age what Islam says about the environment.

But Catovic didn’t start advocating for the environment until about a decade ago when he began working with GreenFaith, an interfaith environmental organization based in New Jersey that sponsored the Green Ramadan event. Catovic is an alumnus of GreenFaith’s 18-month fellowship program; Latif is a current participant.

In 2015, Catovic helped draft the Islamic Declaration on Global Climate Change, which highlights how environmentalism is rooted in Islamic teachings. He calls the Quran “inherently conservationist.” In 2018, he successfully defended his master’s thesis on Islamic environmentalism and food ethics at Drew Theological School.

“I’m reading the traditions with an environmental eye,” Catovic says. “The glasses I put on are looking for green in my text. That’s raising the ritual mundane into an area of consciousness of why am I doing this ritual.”

In his sermon, Catovic reminds the audience of a saying by the Prophet Muhammad that Muslims learn growing up: “The entire Earth has been made a masjid,” a place of prayer. On the surface, it means one can pray anywhere on Earth, even if not in a mosque: Just turn in the direction of Mecca and pray. If you’re without access to water, you can use the Earth’s dirt to purify yourself before praying. But Catovic believes there’s a deeper environmental context in this saying and ones found in the Quran and other traditional Islamic texts.

Catovic asked his audience, “If the entire world is a masjid, and we think it is very wrong — understandably so — in our houses of worship to make them dirty, to pollute them, then what about the greater masjid, which is the whole world?”

Although just a short sentence, the saying is packed with environmental context, especially for plants and animals, who Catovic says are fellow worshipers with their own distinctive ways of prayer.

In looking for environmentalist messages in Islamic texts, Catovic is part of a broader, older faith tradition, according to Ebrahim Moosa, a professor of Islamic studies at the University of Notre Dame. “These concepts are available already within the tradition, so there is nothing new,” says Moosa, who co-directs Notre Dame’s Contending Modernities program, a peace studies initiative that promotes interfaith engagement.

Moosa explains that through ritual, Islam and other religions can teach believers to develop new attachments and habits. This is especially true during during Ramadan, when Moosa says Muslims can take the attention they give their body and God to the next level by applying it to current issues such as environmentalism.

“Ramadan teaches us all those beautiful things of how we can discipline ourselves and our habits,” Moosa says. “Therefore, we can also become citizens and actors who will have new kinds of habits because religion teaches us how to inculcate new habits and new practices.”

Many Muslims live in parts of the world that are already badly damaged by industrialization, capitalism and consumption, he adds, which means that a message of environmentalism can resonate.

Extreme water shortages in Cape Town, South Africa pushed mosques to limit the amount of water used when washing before prayer to conserve resources. “People will frown on you if you become a water abuser in Cape Town,” Moosa says. “It’s an offense against us all.”

Moosa thinks that at a time when many Americans have negative beliefs about Islam, introducing them to the environmental interpretations of the Quran and Muhammad’s teachings can make a difference. He wants people to know that “Islam is a religion that makes a contribution to human civilization and human well being.”

Catovic adds that much of the political context created around Islam conceals the real conversations between Muslims, Christians, Jews and Buddhists. He looks to ministers, rabbis and other faith leaders to seek environmental teachings in holy texts, as each religion brings its own tools for fixing the Earth’s environmental woes.

“If you’re gardening and only using a hoe, you’re only able to do so much,” Catovic says. “But if someone has a pitchfork and a watering can, you can make a fruitful, beautiful garden.”

Thank you for your article. The following link leads to an article that explores some of the textual foundations of Islam and the environment.