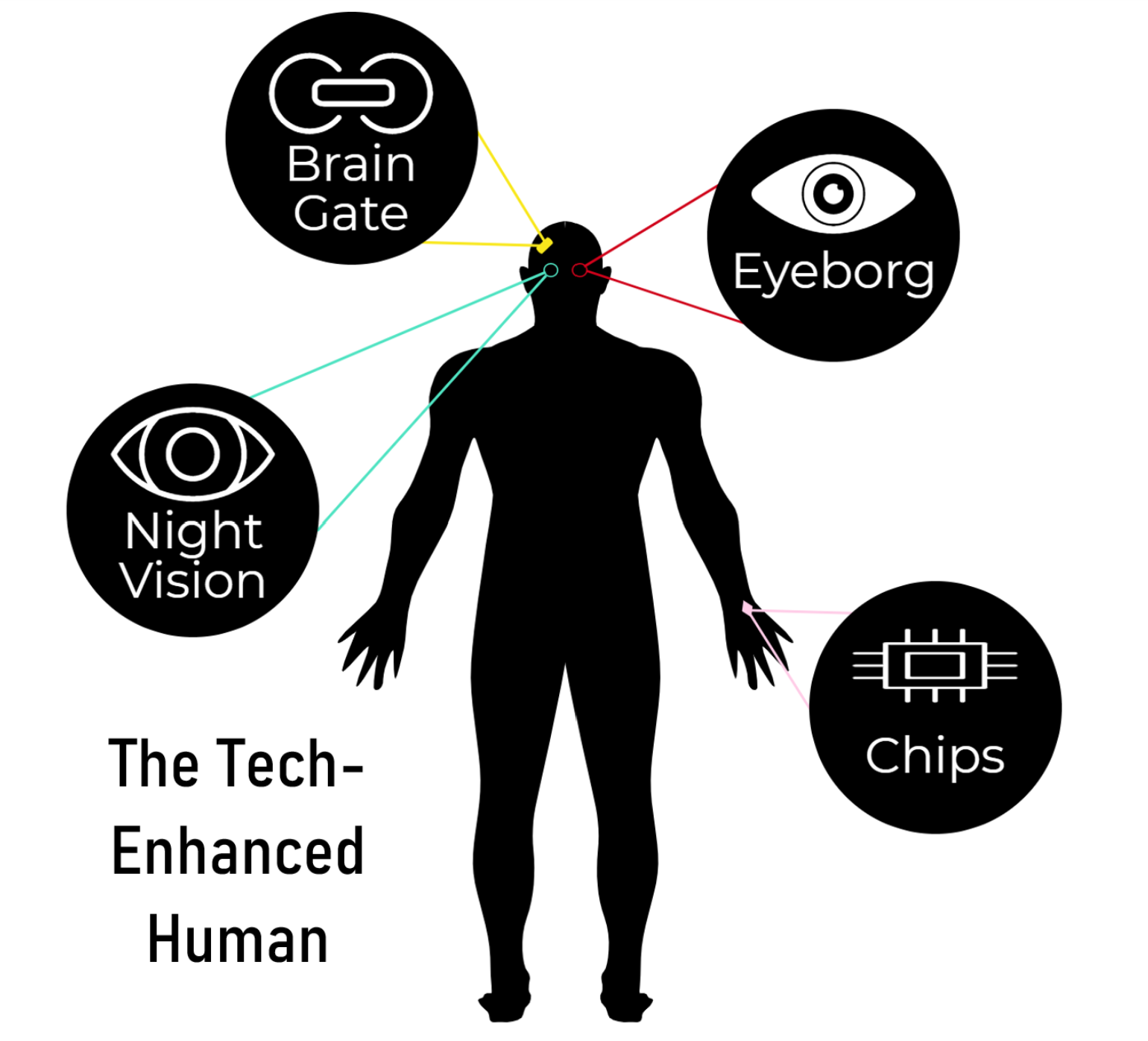 The human body is becoming a playground of experimentation as biohackers come up with new ways to augment our biology. [Credit: Hannah Seo]

Biotech on a Budget

The Terminator returned to the silver screen this month — and while the franchise’s plot remains in the realm of fiction, Arnold Schwarzenegger’s cyborg character is closer to modern science than you might think.

In our own time, body modifications and surgical procedures like breast augmentation or cochlear implants have become so commonplace that we hardly give them a second thought. Today’s biohacks are becoming increasingly creative and extreme. They can vary widely in their utility — from decorative implanted lights to medical hacks and prosthetics — as well as in their level of integration with our own biology.

While the most innovative biohacks tend to occur in lab settings, some biohackers have taken to doing self-modifications, DIY-style. This is a risky practice for many reasons; so if you are looking to join the biohacking club, proceed with caution and only under the care of a qualified medical professional.

“Chipping” has been a reality since 1998, when Kevin Warwick, an English cyberneticist at Redding University and Coventry University, surgically inserted a radio-frequency identification (RFID) chip into his hand. “It was never designed to go in the human body,” he recalls, “so it was all risking it a little bit.”

The chip Warwick implanted was about an inch long — massive compared to current RFID chips which are about the size of a grain of rice. It was programmed to unlock his office doors, turn on his lights and heaters, and unlock his laptop computer.

Biohackers typically implant one of two types of microchips in their bodies: either RFIDs or near-field communication (NFC) chips. The chip type they choose depends on the intended use. For hackers who are looking to complete more secure tasks like wireless payments and ID, an NFC chip is the way to go. But for more versatile actions, like unlocking smart-doors or tracking location, RFID chips are the better bet.

Both chip types use radio waves to communicate with nearby devices, but NFC chips have an extremely limited range of less than two inches, compared to RFID chips which can communicate up to 200 meters. Before a biohacker gets a chip implanted, Warwick says, “you need to sort the technology out that allows things to happen.” You can hardly control the lights in your apartment with an RFID chip if you don’t have a smart-home system and the programming in place.

Gabriel Licina is a biohacker and entrepreneur in Jacksonville, Fla. Back in 2015, he became interested in a drug called chlorin e6 after hearing about vision enhancement experiments in mice. After months of research, he was certain that this could be viable in people, and set about creating eye drops that could augment night vision.

He did it by mixing chlorin e6 with insulin and a sterile saline solution. He laid on his back while his team secured his eyelids to prevent him from blinking the solution out of his eyes, and dropped the solution in. After his eyes had absorbed all the liquid, he put on black lenses as well as sunglasses to protect his then ultra-sensitive retinas. The solution Licina concocted acted temporarily to augment the sensitivity of rod receptor cells — the cells which allow us to see in low light.

The eyedrops made everything brighter, and the effects lasted for several hours after application. But it was pretty bad science, says Licina, and if he were to do it again he would collect more precise data on just how much more he was seeing in the dark than his peers.

At the age of 9, Rob Spence lost his eye while out shooting cow patties with a shotgun in Ireland. Now, Spence is a documentary filmmaker in Toronto. One day, he looked at his glass eye and thought, “you know what, the camera on my cell phone could probably fit in here.”

Spence teamed up with an ocularist — a maker of eye prosthetics — and an engineer to make the “Eyeborg” a reality. He took a 3-D scan of his eye socket to model a prosthetic eye in design software. Then, he figured out how to outfit that prosthetic with a circuit board, a lithium-ion battery, camera and radio-frequency video transmitter.

Spence 3-D-printed his camera in two parts. The bottom half contains a battery plus a circuit board with a reed switch, which allows the eye to be turned on and off when touched by a magnet. The top half of the eye contains the camera and a video transmitter. The eye camera itself has no capacity to store video footage, nor does it allow Spence to “see” in real time. The camera captures footage, and the transmitter sends the video data to a nearby receiver. “You’re getting a wireless video feed,” says Spence, “and you can do whatever you want with that footage.”

As with microchip implants, the prosthetic does not interface with biology in any way. A company in Los Angeles, however, began a clinical trial last month for an artificial vision implant that sends video data directly to the brain, allowing patients to “see.” The system, called “Orion,” looks like a pair of sunglasses, and includes a camera and a video processing unit that translates images into electrical pulses. Those pulses travel to a 60-electrode microchip implanted in the patient’s visual cortex, giving the patient a realistic interpretation of their visual field.

So far, Spence has made a number of documentary-style videos with the Eyeborg. His footage is from “a true first-person perspective”, and he purports his film style as the next step up from such point-of-view movies as “The Blair Witch Project.”

Kevin Warwick, the same biohacker pioneer who first put a microchip in his arm, participated in another groundbreaking experiment in 2002 called BrainGate.

Sitting in a lab in New York City, Warwick had hundreds of tiny electrodes implanted into his arm to interface directly with his peripheral nervous system. When Warwick flexed his arm, the electrodes recorded the electrical signals from his neurons. These signals were sent over the internet, where a robotic arm in London received the signals and flexed the same way.

“Your brain can be in one place, and your body effectively can be wherever you want it,” Warwick says. “An implant like that effectively extends your nervous system via network.”

The technology as it exists now is impractical outside of the lab, but Warwick says it’s moving in a direction that will eventually allow for therapeutic uses. Similar implantations to the peripheral and central nervous systems are the subject of experiments all over the world. Elon Musk talks about developing “neural lace” for brain-machine interfacing, and a tetraplegic man in France recently managed to walk with the aid of a robotic exoskeleton similarly controlled by neural implant.

Just as laser eye surgery has become normalized in society, biohacking is becoming more and more mainstream. For instance, thousands of Swedes have undergone microchipping, normalizing the procedure in Swedish society. Niche subcultures no longer seem so radical. As the technology continues to improve and more biohacking medical therapies develop, perhaps sooner than we think, we’ll all be a little hacked.

Were my i use the hand chip in California to buy iteams at?

Would like to know more about this, mentally, I’ve returned from mexico after 3 yes and same identical issues

They been hacking to my body