A giant larvacean observed with deep-ocean technology, its inner chambers outlined by red lasers. This image was taken on a 2015 test run of the new imaging technology. [Credit: © 2015 MBARI]

Why are Florida’s dolphins becoming resistant to antibiotics?

Tethered to a 2,000-ton research vessel cruising the ocean waters off Oahu, a remotely operated vehicle the size of a smart car roamed 4,500 meters below the surface of the Pacific in October. Mounted on its frame: a new laser-imaging instrument capable of illuminating deep-ocean creatures in ways they have never been seen before.

This was all part of a trial voyage for the “Designing the Future” initiative, a multidisciplinary research venture testing breakthrough technology to finally allow researchers to study deep-ocean animals in their own environments without the animals’ capture. Researchers can even make three-dimensional reconstructions of the creatures they encounter.

“It wasn’t until I went to graduate school that I realized how little we know about life very nearby,” says Kakani Katija, a principal engineer at the Monterey Bay Aquarium Research Institute who led the team that developed the new imaging instrument. “There are ocean expeditions even now that come across life that has never been described, and I felt that here is a really noble effort to try and understand the life that we share our planet with.”

Known as DeepPIV, or deep particle image velocimetry instrument, the machine includes a camera that captures images of the deep ocean and the life within it. Those images travel up a long fiber-optic umbilical cord, which works as a high-speed two-way communication cable, to deliver the data to the scientists on the ship above. What makes DeepPIV unique is that it can image animals even in the darkest depths by highlighting tiny ocean particles made visible by the instrument’s laser beams.

Ocean water is full of these little floating particles, or “marine snow,” says Katija. When DeepPIV’s lasers hit those particles, the laser light scatters, resulting in a small, illuminated visual field that can be seen on camera. The camera captures video frames that track these lit-up particles as they move, allowing researchers to analyze fluid motion in the water.

Many deep-ocean flora and fauna are gelatinous or translucent, including kelp and jellyfish. This means they too can be penetrated by the instrument’s laser beams. Animals’ internal structures light up in the presence of the laser, revealing the creatures’ complete inner and outer forms.

“In many respects, DeepPIV works sort of like an MRI,” says Bruce Robison, a senior scientist at Monterey Bay. “We slide the laser sheet through the body of an animal while we’re recording video frames, and once we stitch those frames together we get a three-dimensional picture of the animal’s outsides and insides.”

Tracking particles inside the animals means that researchers can use the instrument to analyze animal digestion and respiration.

The October cruise proved to the team that DeepPIV was viable for larger ocean expeditions. This version of the instrument used was the fourth iteration to be developed over a five-year period. Katija says that, excluding labor and ship time needs over development, DeepPIV’s first-year expenses were on the order of $15,000 — with subsequent years of hardware costs easily doubling that expenditure.

While the instrument has previously imaged animals in the mid-to-deep ocean, the test run off Oahu was the first deployment of DeepPIV for both fluid motion and three-dimensional animal reconstruction measurements. In this trial the team succeeded in scanning and digitally reconstructing Solmissus and Alatina box jellyfish.

DeepPIV’s ability to visualize the movements and structures of marine animals’ bodies in real time and in their natural habitats is an unprecedented feat. For decades, the standard method to study a marine animal was to capture it in a net, haul it up to sea level, and investigate it in a laboratory. But bringing a critter from the depths of the ocean up to our level causes drastic changes and damage, making much of the research collected via these methods unreliable.

Once they are pulled out of the high-pressure deep ocean environment, many animals’ bodies will simply collapse in on themselves, says Robison. These animals are perfectly adapted to their own world. By dragging them up to ours, he says, “we subject them to things like decompression and temperature stress — so we were always suspicious of the kinds of measurements we were able to make because the animal had gone through such significant changes.”

The challenge for scientists became “how can we study something we cannot readily collect?”

This is #solmissus! We came across this #jellyfish at 503 m deep during the @SchmidtOcean #DesigningTheFuture cruise off the coast of #Oahu in 2019. pic.twitter.com/IFsEEYRDYU

The answer came through the convergence of physics and biology. Katija, among others, saw this as a problem of engineering. The technology of the DeepPIV has been around and used in laboratory settings for years, she says. But getting this sort of precise and delicate instrumentation to work in a pristine lab environment is very different from getting it to work in the throes of the ocean.

“The seafloor is deep, it’s remote, and the deeper you go, the higher the tremendous pressure,” says Katija. “Sea water is incredibly caustic…to get something repeatedly functioning down there is not an easy task.” Over the course of five years, Katija and her team at Monterey Bay modified existing lab technology and engineered multiple iterations of the instrument before arriving at the DeepPIV they operate today.

The Designing the Future initiative, a joint project of Monterey Bay and the Schmidt Ocean Institute, seeks to address a grand challenge of ocean research: all the easy questions have been answered. Resolutions to the remaining mysteries are submersed in a world that is largely inaccessible to us. 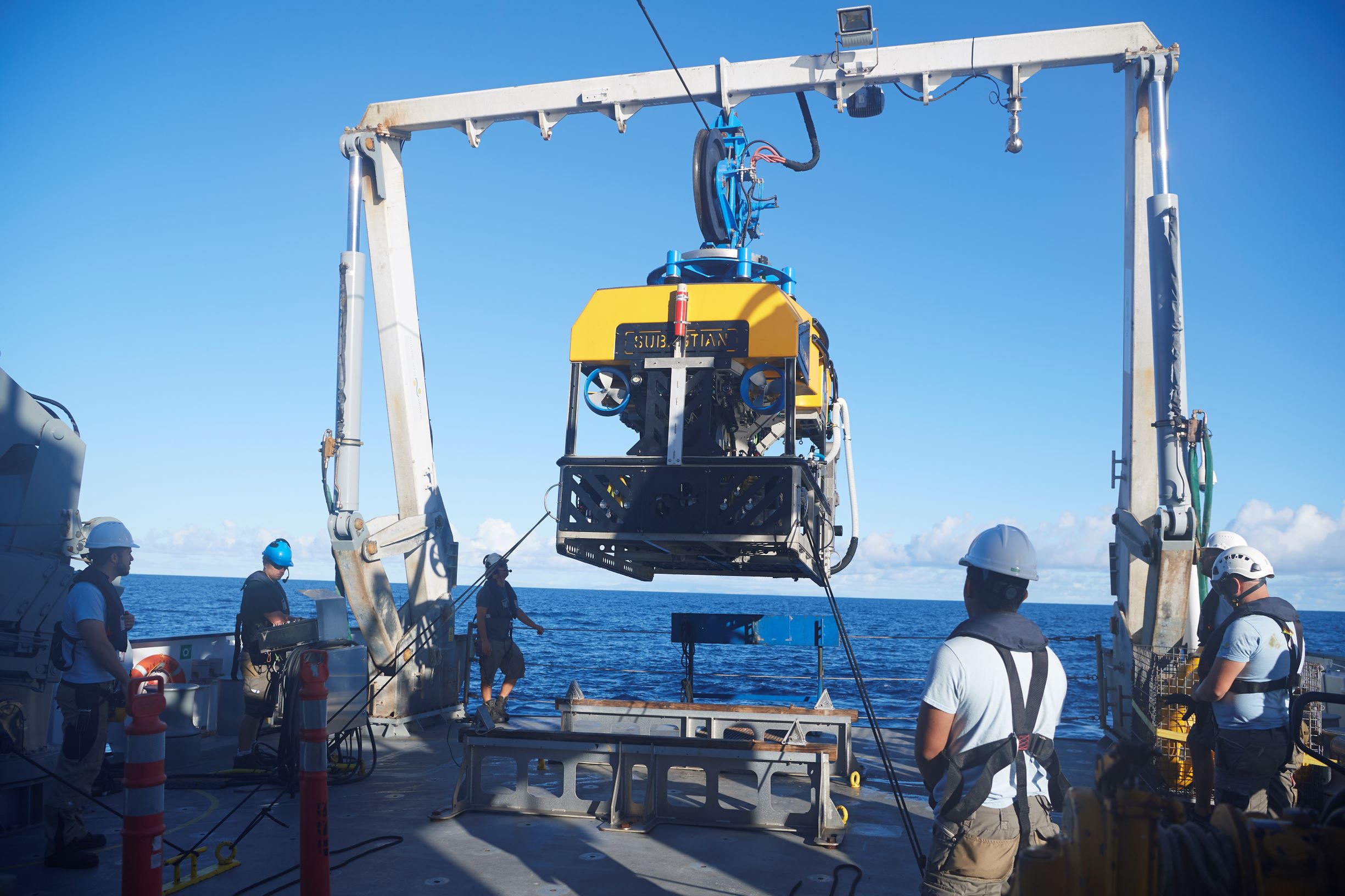 SuBastian, the remotely operated vehicle on which the DeepPIV was mounted, gets ready for deployment. [Credit: Schmidt Ocean Institute]

Deep ocean research is “high risk and high reward,” says Brennan Phillips, an engineer and oceanographer at the University of Rhode Island, as well as the principal investigator of Designing the Future. Ocean exploration tools today may be operating with unprecedented efficiency, delicacy and precision, but there are still huge engineering hurdles to overcome, he says.

When scientists send tools like the DeepPIV into deep waters, they mount the instrument on ROVs — remotely operated vehicles. These ROVs have extremely powerful hydraulic systems that are loud, and lights that are harsh. Phillips says that the combination of size, noise and lights scares a lot of things away from us — smaller, quieter, and less invasive ROVs will need to be developed as research moves forward.

“We have better maps of other planets than we have of the sea floor,” says Katija. “The ocean is this incredibly large volume, a huge habitat that harbors a lot of life we know very little about.” That incredible volume of water and the creatures in it are largely out of sight, and therefore out of mind.

The push for a new generation of deep-sea exploration will require renewed public interest and enthusiasm, as well as willpower from funders and researchers. Katija points out that we just celebrated the 50th anniversary of the moon landing. If we could put a man on the moon half a century ago, she asks, why shouldn’t we be able to explore the unknown areas of our own world?