Taking the “folk” out of folk culture 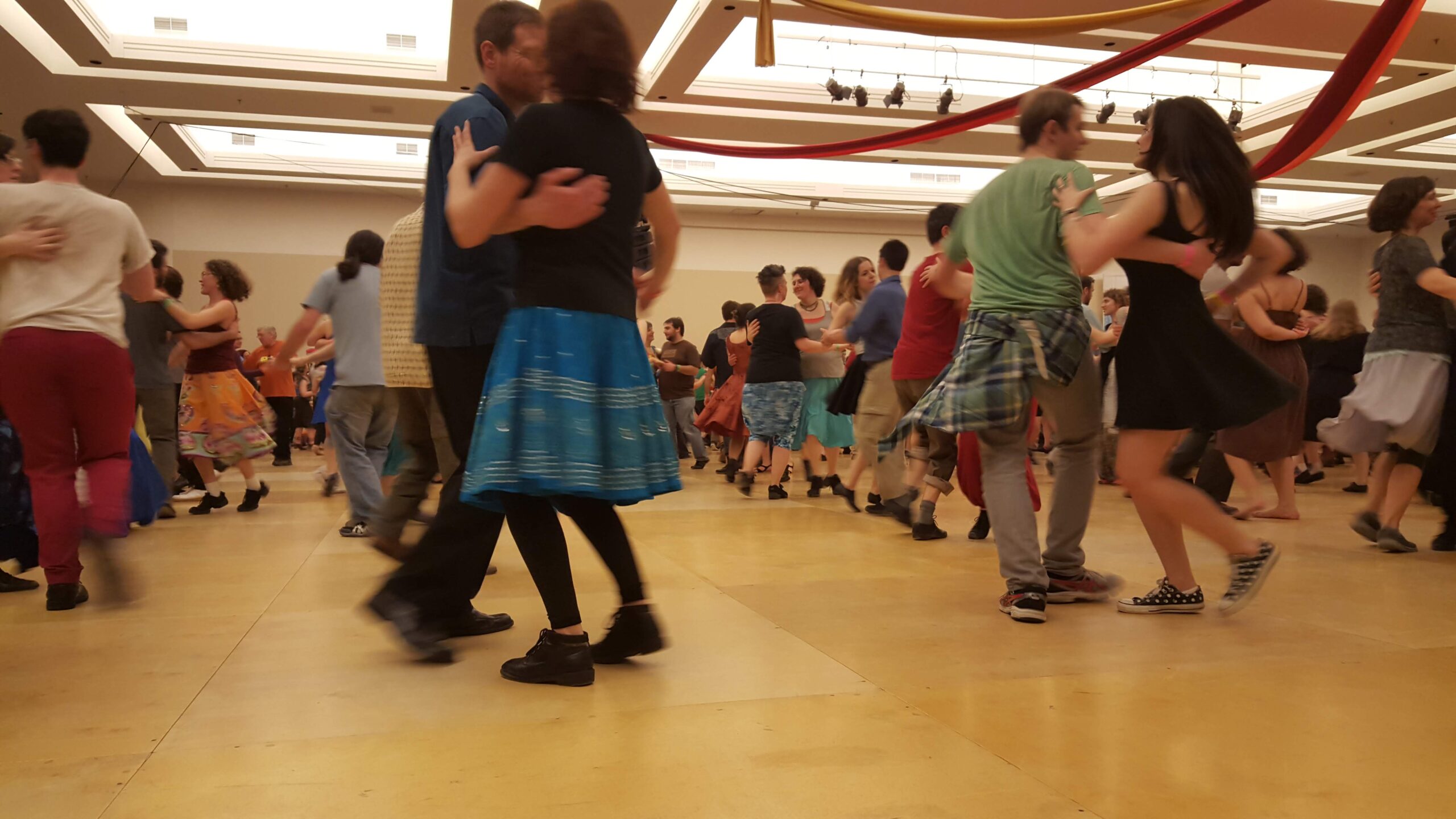 Before the pandemic, folk dancing and music events like this contra dance allowed community members to come together. Now, events like these would endanger everyone involved. [Credit: Rebecca Sohn| CC BY-NC-ND 2.0]

It’s literally in the name — folk culture depends on groups of people. Whether they’re attending a folk dance or a jam session, members of folk communities gather together to engage in a group experience. Or at least, that’s how it was before the COVID-19 pandemic. Now, crowded dance halls and cramped jam sessions feel like distant memories.

Folk dancers and musicians are learning to navigate a world in which physical togetherness, so vital to their culture, is dangerous. But these communities haven’t given up on keeping people connected. From a Facebook group that seeks to capture the energy of a social dance to a livestream series that mimics the spontaneity of playing folk music with others, members of folk dancing and music communities are finding creative ways to stay connected.

This story was reported and produced by Rebecca Sohn and edited by Taylor White.

Tunes are traditional except when noted. All music used with permission.

Scienceline · Taking the “folk” out of folk culture

Gabe Holmes: It almost felt like I was tied to the railroad tracks. It’s like, I know where this is going. You know, what it reminded me of in some ways was the stages of grief. Like, maybe if we just try to do this, everything’s gonna be okay. And I was thinking, probably not.

Rebecca Sohn: In early March, people across the United States watched COVID-19 start to transform daily life. But how does a group of communities that depends on in-person interaction respond to a global pandemic? This is Distanced, Scienceline’s Special Project about how different communities are responding to the coronavirus pandemic. This episode explores how members of folk dancing and music communities have responded to the virus. As a folk dancer and fiddler myself, I wondered — what do you do when the “folk” is taken out of folk culture?

Gabe Holmes: I just remember looking out the window and I thought, you know, here we are. We’re in this international city with two or three major airports in the immediate vicinity. There’s no way it’s not already circulating.

Rebecca Sohn: That’s Gabe Holmes, a folk dancer from Brooklyn, who you heard from at the beginning of the story. Early on, he recognized this widespread circulation was a huge problem for social dancing communities, particularly the style of dancing he does — contra dancing.

Shoshana Silverman: It is square dancing in lines, it is dancing with a structure where you don’t need to make up moves if you don’t want to. It is a very, very social sort of dancing.

Rebecca Sohn: Obviously, this kind of social dancing creates huge problems during a disease outbreak, and by the first week of March, CDNY had a plan to try to cope with the virus.

Shoshana Silverman: Our safety precaution plan involved having everyone wash their hands as they came in the door, having gloves that were used in certain circumstances, things of that sort.

Rebecca Sohn: But it wasn’t enough. A couple weeks later, CDNY and dances across the country were all cancelled indefinitely. What’s a dancer to do?

Gabe Holmes: It was a sleepless night, I was fretting, I was probably, you know, spending too much time on my phone. And this corny pun just kind of came to me.

Rebecca Sohn: This pun was the name of a Facebook group called “Social Disdance,” which Holmes created after that sleepless night in March. [Music starts to fade in] A virtual hub for anything and everything related to contra dancing, people post everything from dance videos to music recommendations and event pages for virtual concerts.The group gained hundreds of members in its first few weeks of existence. Now, it’s a buzzing virtual community of over 3,000.

Gabe Holmes: One of the things that is nice about dancing is this ability to interact with people in a kind of nonverbal, ephemeral, inconsequential way, which is, I think, what’s missing from all our lives.  I don’t know the extent to which that can be reproduced in a medium that’s inherently verbal. But we try.

Rebecca Sohn: But as much as a bummer as the pandemic has been for dancers, for many musicians, no dances or concerts means no income. Shoshana Silverman says that CDNY has developed a fund to help some musicians who play at dances, and organizations across the country have stepped in to try to lessen the load for struggling musicians. But dance musicians, especially those who play with a band, are also experiencing a loss of community.

Rebecca Sohn: A pianist and accordionist who usually plays with English Country Dance band Alchemy, among others, Karen Axelrod realized in March how much she already missed playing with her bandmates. She tried playing a livestream concert, but found playing alone unfulfilling.

(Music fades in as Axelrod is speaking)

Karen Axelrod: So, I thought of this idea for a show where people send me tunes, and I wouldn’t listen to what they did beforehand, but I would know what tune it is and I would play along. So there would be some element of surprise and improvisation, and I wouldn’t know when I was going to take the round and they were going to harmonize or when they’re going to take the round, and if they’re going to get softer. So it was all about listening and responding, which is what I love about playing with my bandmates.

(Karen Axelrod – “That was “Jumpers Chase” with Daron Douglas on fiddle)

Rebecca Sohn: Axelrod calls her show “In The Moment” and broadcasts it on Facebook Live every week. It has become quite popular — her videos usually get over 1,000 views and hundreds of comments, although she says around 180 people watch the streams live. She even leaves her PayPal in the description so that viewers can tip her. But although she says it’s far more fun than playing alone, it can’t replace playing in person.

Karen Axelrod: I see playing music as very much like a dance. There’s give and take and listening and responding.

Rebecca Sohn: Axelrod says that she’s still missing half of that dance. This solution can only solve so much of her problem, just as Holmes’ Facebook group is missing the nonverbal communication of dancing. As the community struggles to stay connected during the pandemic, dancers and musicians await a time when they can gather together again. But for dancers, it might be a while.

Geoff Holm: I’m struggling to figure out how close proximity dancing is not going to be a risk factor.

Geoff Holm: Especially as this is respiratory, being short of breath and trying to gain a lot of oxygen, that’s not something that is conducive to not transmitting the virus. You’re still going to be in close proximity, unless you can figure out how to not be in close proximity, which kind of defeats the whole purpose of social dancing.

Rebecca Sohn: As an occasional contra dancer himself, Holm doesn’t see how a socially distanced dance could be particularly fulfilling. Shoshana Silverman agrees.

Shoshana Silverman: Personally, I want to be dancing when I can actually, like, hold hands with the people I’m dancing with as I would typically in a dance. And if I have a dance where I’m not actually touching anyone, that’s not going to fill the need for me.

Rebecca Sohn: Luckily, Holm is more optimistic about the potential for musicians to gather. While he doesn’t think anyone should be crowding into cramped performance spaces anytime soon, he does think there are ways for musicians to safely play together, particularly outdoors. In fact, Karen Axelrod recently reunited with one of her bandmates, who sat on Alexrod’s porch while she accompanied her from outside.

Karen Axelrod: It was the most wonderful experience to play with a bandmate, who I love to play with and to play in person after not being together for over two and a half months. So it was a huge high, to have that again.

Rebecca Sohn: Of course, Axelrod still can’t play with her band most days, and it will be a long time before there are in-person dances for her to play at again. Colgate’s Geoff Holm says that it’s likely events like social dances can’t resume until there is a reliable, widely-used vaccine for COVID-19, something that will take months, maybe even years. This long timeline is something that dancers like Gabe Holmes have had to come to terms with. He’s even considered the possibility that for him and others, dancing might not be safe for them ever again.

Gabe Holmes: The people who are doing these activities that we want to resume won’t necessarily be us, and we need to learn to take kind of vicarious joy in that. You know, I might not dance for a while, or ever.

And I’m okay with that. You know, that’s something that helps get me through the day. The idea that somebody is gonna dance again. That’s enough for me.

Rebecca Sohn: Holmes even thinks that as the world recovers from the COVID-19 pandemic, the folk dancing community might have a unique perspective to offer.

Gabe Holmes: One of the things that I think dancing can be a metaphor for is how people move through the world in a way that’s spatially generous, ‘cause a lot of dancing is about creating space for people, where other people can move and sort of sharing that. And, you know in many ways, that’s what we’re being asked to do with social distancing, as well. And I feel like that’s something that the dance community can potentially offer to the rest of the world.