Depending on where you live, abortion care this year may have become either harder or easier to access than ever before 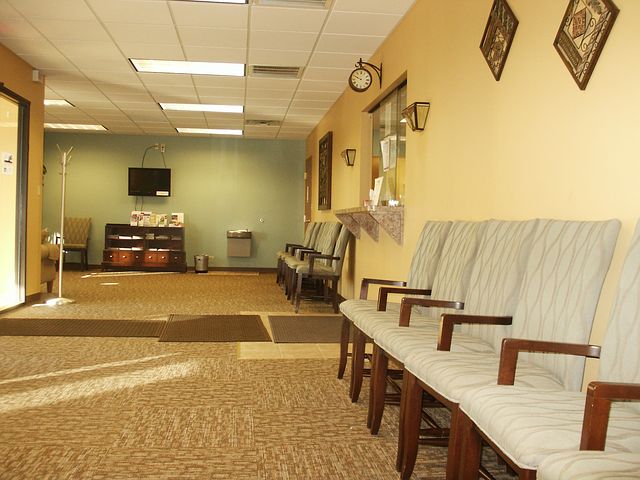 Some abortion clinic waiting rooms have sat empty during the pandemic, due to a combination of COVID-19 related abortion bans and new clinic capacity limits. [James Timothy Peters | CC BY 4.0]

Beyond X & Y: Men Seem to be on Board with Taking the Pill

When the pandemic struck Texas in April 2020, health care providers were forced to stop offering abortions — but demand for them didn’t go away. Clinic staffers fielded an influx of anxious phone calls from confused people, talking each caller through their options: an out-of-state-referral, or holding out and waiting for the end of COVID-19 restrictions.

“My standard spiel was like, ‘I don’t know when we’re going to reopen. I have a list with your name on it, and as soon as I find out, I’m gonna let you know. But if you don’t want to wait, here’s where you can go,’” says Dr. Ghazaleh Moayedi, an obstetrician-gynecologist in Texas. She referred about 20 to 30 people during the month-long clinic closure to colleagues in Alabama, New Mexico, and as far away as Illinois and California.

It was another sign of how drastically COVID-19 has altered the landscape of medicine nationwide. “Everything about health care has changed,” says Moayedi, who is a board member of Physicians for Reproductive Health, which advocates for more equitable health care, including abortion access. People aren’t seeing their primary care doctors nearly as much, medical diagnoses are down, and there were weeks and months where procedures deemed non-essential or elective were entirely inaccessible in many states.

The pandemic has changed how, when and if people get medical care — and reproductive health care and abortion are no exceptions. How easily one can get an abortion in the U.S. has long been a function of where you live. Now, COVID-19 has further amplified the disparities.

At least 11 states, including Texas, restricted abortions during the spring by categorizing abortion as non-essential care, according to the Guttmacher Institute, a sexual health and reproductive rights research group. Although these restrictions were eventually blocked in court, COVID-19’s impacts on abortion access didn’t end with the lifted restrictions.

In many states, particularly in the Midwest and Southeast, experts say the pandemic has exacerbated existing barriers to abortion. With increasing financial stress and logistical complications, like travel restrictions and lack of childcare, many people seeking abortions need even more support than usual to get them. Yet 23 states — primarily in the West and Northeast — have moved in the opposite direction by making medication abortion more accessible than ever during the pandemic. They’ve been able to do so because of a court order temporarily easing federal restrictions on the so-called “abortion pill” mifepristone (formerly known as RU-486), allowing clinicians to prescribe it without an in-person visit.

In geographically vast Texas, going to another state for an abortion has not been possible for some women during the pandemic, according to Moayedi. “I care for many people that have never left Texas at all. So certainly leaving Texas during a pandemic to get an abortion is just insurmountable,” she says. Because of the month-long abortion ban in Texas, some women decided to carry their fetuses to term while others waited until later in their pregnancies to get an abortion.

After abortion services resumed state-wide in May, Texas providers had to work through the backlog. Between the ban and the resulting backlog, care was delayed by as long as two months in some cases. Texas saw a 40% increase in second-trimester abortion procedures following the temporary ban.

Texas isn’t the only state where abortion stopped altogether during the pandemic. “South Dakota wasn’t able to staff their clinic,” says David Slusky, a health economist at the University of Kansas researching COVID-19 policy impact on abortion access. Planned Parenthood in Sioux Falls has been the only clinic offering abortion services in the entire state of South Dakota for more than two decades, says Evelyn Griesse, who runs South Dakota Access for Every Woman, a fund that helps subsidize abortion care.

Staffed by out-of-state physicians, the Sioux Falls clinic stopped flying in doctors in March due to pandemic safety concerns, and didn’t resume abortion services until November. The clinic is still operating at reduced capacity, offering abortions only once a month, says Griesse.

What other options do South Dakotans have? “Get in your car and drive,” says Slusky. That’s a real burden, he adds, “especially when you have to do multiple visits on different days, for a woman who already has kids, or hourly workers who might not have access to a vehicle — there’s a whole variety of issues that were already exacerbating the [access] situation before COVID-19. This did not help.”

Even before the economic dislocations of COVID-19, many people struggled to afford abortions. The Hyde Amendment prevents Medicaid and other federal funds from being used to pay for abortion services. “The most central fact about abortion in the United States at this moment is that the majority of abortion patients are poor,” says Carole Joffe, a reproductive sciences professor at the University of California, San Francisco. About half are below the poverty line, and another quarter are just above it, adds Joffe, co-author of the book, “Obstacle Course: The Everyday Struggle to Get an Abortion in America.”

Black, Latino and Indigenous women and families have been disproportionately affected by the economic shocks of the pandemic, and unemployment rates have still not fully recovered from historic highs. For the nearly two-thirds of people seeking abortion who are already parents, school closures are a further complication.

“Conversation after conversation has been about people struggling. Struggling with managing what to do with their kids, having to rearrange their lives so they could help with virtual learning, trying to figure out what virtual learning even is, sending their kids back to school but being terrified,” says Moayedi, the Texas physician. “It’s just this resounding collective voice of fear, anxiety and disillusionment.”

COVID-19 clinic capacity rules have also limited abortion access. “We’re spreading our appointments out. That means that we can have fewer appointments in a day,” says Chrisse France, executive director of Preterm, a nonprofit sexual health clinic in Cleveland and one of the largest abortion providers in Ohio.

Since Preterm is treating fewer people over longer days and staff need to be paid for those additional hours, “we’re spending lots more money,” says France. “We’ll do this as long as we have to, and as long as we can maintain accessibility for people who need it.”

Fewer appointments also means longer wait times for patients. Where once patients could have an appointment booked in a day or two, “people were having to wait two weeks,” France says.

The pandemic hasn’t been a catastrophe for abortion access everywhere, though. While 18 states explicitly ban telehealth abortion or require in-person clinic visits, others are expanding abortion services via online prescriptions of mifepristone. “It’s a win for the women who are pregnant getting these drugs, not having to travel, and it’s a win for the abortion clinic staff who don’t have to undergo further risk,” says Joffe, “but this is temporary.”

Less temporary may be the impact of COVID-19 on family planning decisions. “For many people, it’s not a desirable time to have a baby,” says Joffe. In a recent Guttmacher Institute survey, about one-third of women reported wanting to delay pregnancy or have fewer children as a result of the pandemic. An abortion clinic worker in Ohio, who asked not to be identified, remembers one such patient: “She just needed to talk. She was a mother of six kids and she was just like, ‘I don’t want this abortion, but I need to.’”

In Texas, Moayedi has spoken to many patients who are similarly struggling. “What I hear a lot is people just being extremely fearful of being pregnant during this time,” she says, adding, “I really commiserate with them. I was planning on expanding my family this year, too.” Instead, she’s waiting to see what the future brings.