Take dams down and the fish will come 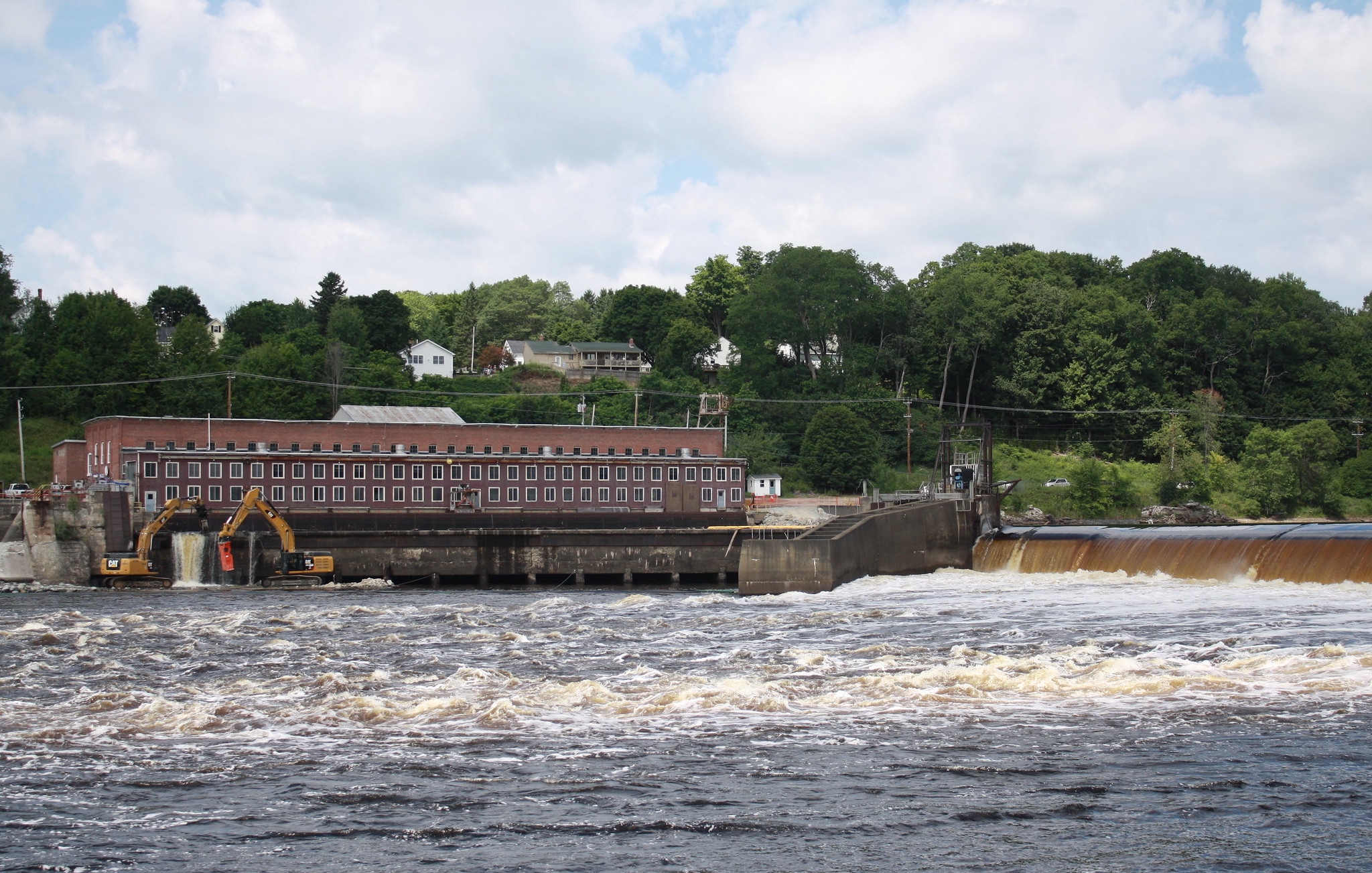 Removal of the Veazie Dam on Maine’s Penobscot River from 2012 to 2013 allowed alewives, Atlantic salmon and several other fish species to reach their breeding habitat once again. [Credit: U.S. Fish and Wildlife Service | Public domain]

During the spring fish migration from March to June, more than 2 million alewives now swim from the Atlantic Ocean up Maine’s Penobscot River to lay their eggs. Just 10 years ago, this massive migration was more of a struggling trickle: the Penobscot, one of New England’s largest rivers, was blocked by three aging hydroelectric dams.

Dams are a key reason why the world’s migratory freshwater fish populations have fallen by an estimated 76% over the past 50 years, says a recent report from the World Fish Migration Foundation. In fact, fully two-thirds of the world’s longer rivers are obstructed by dams and reservoirs, according to a separate study published in Nature.

On the Penobscot, saving dwindling fish species meant trapping the few survivors at fish ladders and trucking them upstream. This was a stopgap measure, though. Now in Maine and across the United States, full dam removals are more seriously slowing the decline of migratory fish — and could one day reverse the trend.

“Take it down and they will come,” said biologist John Waldman, one of the authors of the World Fish Migration report. He called these population collapses “a real horror story,” but pointed out that dam removals can undo some of the damage. In many places, old dams are no longer even producing power.

Freshwater ecosystems like rivers cover less than 1% of the planet’s surface, but a 2010 study found that these habitats are home to one-third of all vertebrate animals. When not swimming upstream, many migratory fish live in the ocean. There, they help support the 1.7 million U.S. jobs that depend on fisheries, said Carrie Robinson, director of the National Oceanic and Atmospheric Administration’s Office of Habitat Conservation.

Robinson and Waldman spoke during an online event hosted by the fishing town of Plymouth, Massachusetts (part of a World Fish Migration Day celebration across dozens of countries last October).

Both upstream and downstream, dams reduce available habitat for fish and other species living in rivers. These obstacles also stop alewives, salmon and more than 1,000 other fish species from completing the migrations they need to reproduce and survive. In the Penobscot River in the early 2000s, no more than a few thousand alewives, also known as river herring, struggled up the river each year. Then between 2012 and 2015, a nonprofit group formed specifically for this purpose removed two of the dams and built a channel for fish to swim around the third.

On a smaller scale, Plymouth is also restoring its rivers and river herring. In 2002, the town removed the first of a series of old mill dams built in the 1700s and 1800s on its main river, Town Brook. The dams were no longer in use, and “certainly negatively impacting the stream for a whole multitude of reasons,” said David Gould, the town’s director of marine and environmental affairs, in an interview.

After the first dam came down, a team of local biologists led by Abigail Franklin Archer determined that nearly all of the migrating fish successfully navigated the restored stretch of the river. But only a small fraction made it past two other dams still standing between the ocean and the fish’s spawning habitat upstream. Gould says this data allowed his team to get funding to remove those next two dams, and eventually complete their restoration of Town Brook in 2018.

Despite these successes, dam removals can still be controversial. These projects can be difficult to get going, and Plymouth is “a really good outlier,” according to Eric Hutchins, a fisheries biologist at the National Oceanic and Atmospheric Administration who spoke to Scienceline in an interview. For example, last July the federal government rejected plans to remove four enormous hydroelectric dams on the Snake River in Washington state. The decision stymied a 20-year fight to ease endangered salmon’s migration on the river and boost populations of orcas that feed on salmon.

Hydropower from dams supplied 37% of the renewable energy distributed by U.S. utility companies in 2020, according to the Energy Information Administration. As addressing climate change becomes more and more urgent, getting rid of any renewable energy is a tough proposition. But other sources of clean energy are catching up: In 2019, wind surpassed hydropower for the first time as the largest source of renewable energy in the country.

Even before grappling with the country’s electricity mix, local authorities can help migratory fish. The United States has somewhere between 90,000 and 2 million dams, but only about 2,000 of them actually generate power, said conservationist Bob Irvin of American Rivers at the Plymouth event. Many of the rest are defunct mill dams, decades or even centuries old. Communities could remove these unproductive dams without any loss to renewable energy production.

In fact, removing dams can help rivers and their fish adapt to climate change, said Gould. Town Brook is fed by cold groundwater, and the river’s free-flowing stretches remain cool even in the summer. But the water trapped behind dams stays relatively still, sitting in the sun and heating up. “If you have climate change going on, and you already have all of these impoundments, these streams are only going to get warmer and warmer,” he said. Removing dams returns rivers to relatively normal water temperatures, offering a cooler baseline “which allows them to become that much more resilient to increasing climate change,” Gould added.

By bringing back alewives and other fish, New England would also protect an invaluable part of the region’s culture. “They’re a unique part of our American heritage,” said Waldman, the biologist.

These fish have been important to Massachusetts’ Indigenous people for 12,000 years, pointed out Darius Coombs, a member of the Mashpee Wampanoag tribe and director of Wampanoag Interpretation and Research at Plimoth Plantation. In a video recorded from a riverbank in Plymouth, he told the famous story of Tisquantum, a Patuxet Wampanoag man who showed the Pilgrims how to use herring as fertilizer for corn. And these fish are much more than just food and fertilizer. When herring run up the rivers each spring, Coombs explained, “that’s our new year.”

I have mirrored this article to the bluefish.org website and it is accompanied by a presentation by Idaho Congressman Mike Simpson that is well worth watching (1 minute excerpt from local news).

Importantly, the effort to remove lower Snake River dams has not been stymied, rather as testament to our Congressman’s efforts, the dam removal effort has never been stronger.