Buckets in hand, ecologists scramble to save the threatened Santa Ana sucker 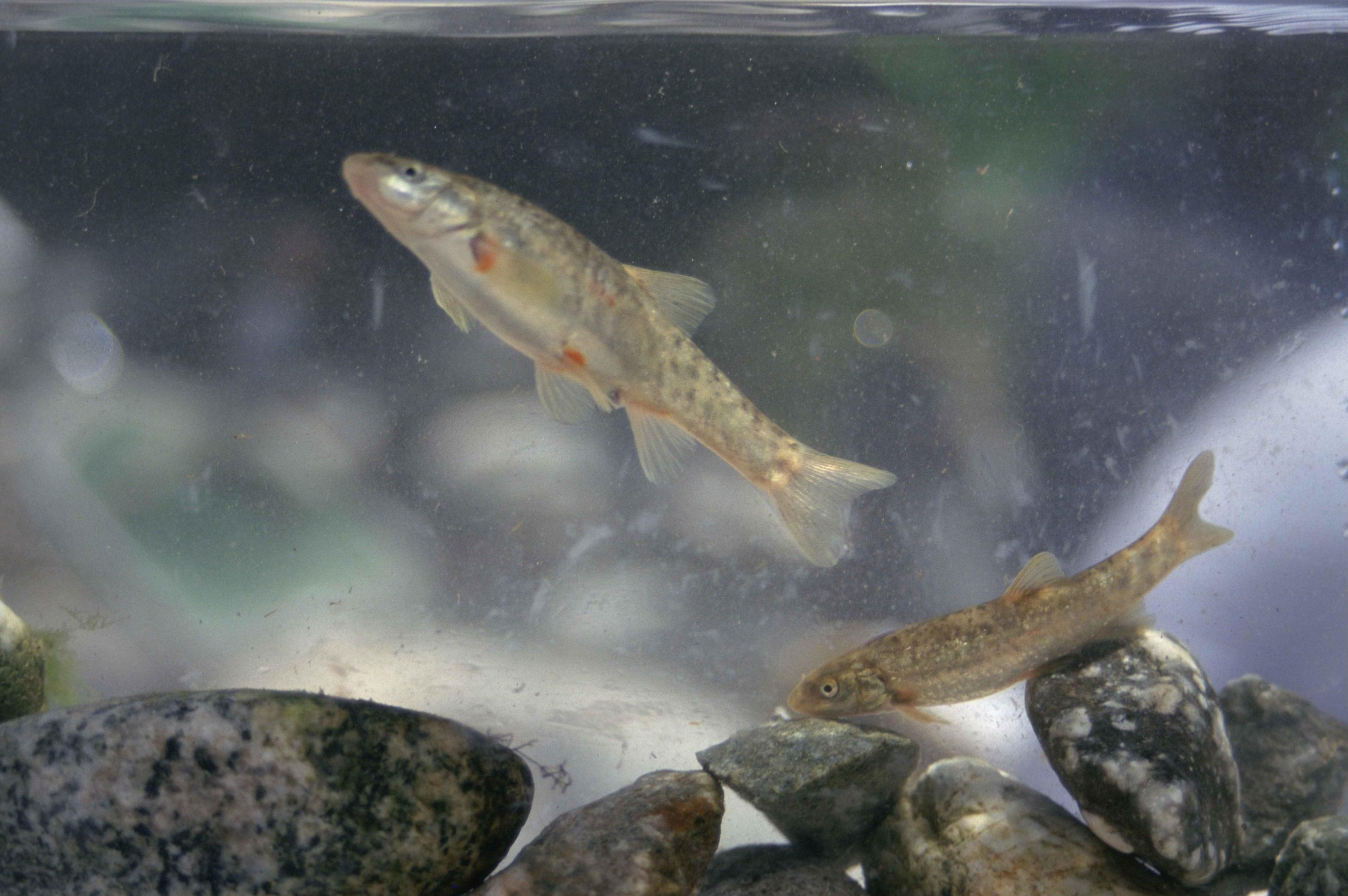 The Santa Ana sucker fish grab in Southern California may be the weirdest effort to save an at-risk species.

Whenever an upstream sewage-treatment plant cuts off flow to the river, a brigade of ecologists and volunteers rush to the newly-exposed riverbed to rescue the stranded sucker fish, a federally protected species. They grab fish flopping around on the river bottom and scoop them out of receding puddles.

“Sometimes we’re literally running to pick up these fish and get them back in water,” says Heather Dyer of the San Bernardino Valley Municipal Water District. “Everybody has buckets and aerators, and then we have some coolers with aerators as well that are staged along the river.”

The sucker was a common sight in streams up until the 1970s. Now its range is restricted to just three of the Los Angeles area’s increasingly-channeled, developed, and overdrawn rivers. The US Fish and Wildlife Service declared the fish a threatened species in 2000.

Environmentalists are trying to end the need for the riverbed rescues, which have saved thousands of sucker fish since last year. On September 15, three conservation groups submitted a formal request for the facility to modify its activity to ensure a constant flow in the Santa Ana River. But the San Bernardino Municipal Water Department, which operates the treatment plant, is caught between conflicting mandates to clean up the river — a source of drinking water for over 3 million people in Orange County — and protect the fish. The extreme drought has increased tensions over river management in the west, often pitting environmental concerns against each other.

However, conservationists have grown weary of seeing plants and animals disappear before their eyes. “This planet is growing lonelier by the day as species are winking out,” says Ileene Anderson, a senior scientist at the Center for Biological Diversity, one of the organizations that filed the request. 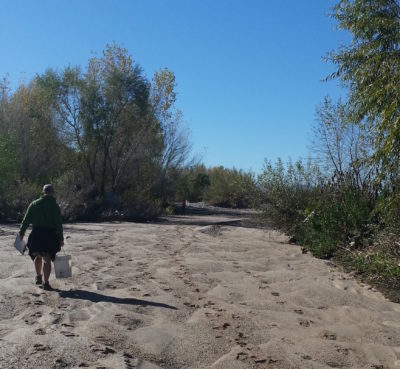 The sucker fish skirmish is happening in the Santa Ana River, which runs through a wide, sandy floodplain almost 60 miles due east of downtown Los Angeles. The Santa Ana swells and shrinks with the intermittent rainfall that characterizes the region. On its north bank near the city of Colton sits the Rapid Infiltration and Extraction (RIX) facility, a wastewater treatment plant that sterilizes and removes pollutants, such as nitrates and heavy metals, from the wastewater generated by the surrounding cities. The treated water flows back into the river, which provides for wildlife, drinking, irrigation and industry downstream. It rarely reaches the Pacific Ocean.

The problem comes whenever the RIX facility shuts down. The plant provides so much of the river’s water that when it stops its discharge for more than an hour, the meager flow from upstream quickly seeps into the ground. This happened 93 times in the past three years, though not all of the shutdowns lasted long enough to dry out the river. The shut-offs occur during power outages or when maintenance crews need to replace the ultraviolet lights that sterilize the water.

Since early 2015, ecologists and volunteers have saved over 2,200 suckers, and lost only 106, over the course of five rescues. However, they can only organize rescues during the facility’s two scheduled shutdowns each year.

That’s bad news for the sucker fish, which grows to 10 inches and looks much like the algae-covered river rocks among which it lives. Although it’s called a sucker, the fish scrapes, rather than sucks, the algae off the rocks. 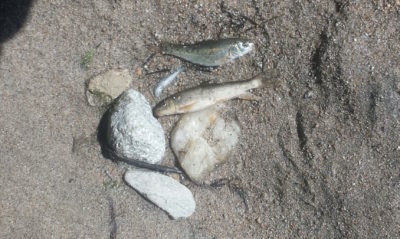 An arroyo chub (top) and a tiny mosquito fish (middle) share a final resting place on the riverbed with a threatened Santa Ana sucker (bottom) after a facility shutdown upstream left the river dry. [Image credit: courtesy of Heather Dyer]

Environmentalists have been battling the treatment plant’s operator, the Santa Ana Regional Water Quality Control Board, since the shut-offs came to light in 2014. However, records provided by the San Bernardino Valley Municipal Water Department indicate that these shutdowns stretch back to 1998. What’s more, RIX never applied for a permit to disrupt the protected fish, a legal requirement if it intends to shut off, according to Anderson. Officials at RIX would not respond to repeated requests for additional information.

Meanwhile, the U.S. Fish and Wildlife Service has opened an investigation on the RIX facility shutdowns. The agency was previously involved with litigation over allegations that political considerations influenced the parts of the river they had designated as critical habitat for the sucker. An official at the Fish and Wildlife Service declined to comment on the fish or the investigation.

It took until December for the Santa Ana sucker to make it onto the agenda of the regional water board’s meeting. Anderson says that the board declined to revise the treatment plant’s permit. “From my perspective, that was disappointing,” she says.

One bright spot for the sucker fish is that captive-breeding programs are succeeding and expanding. The Riverside-Corona Resource Conservation District hopes to introduce captive-bred fish to the river by 2018, according to the district’s Kerwin Russell.

Meanwhile, the Fish and Wildlife Service and the San Bernardino Valley Municipal Water District are independently working on plans to mitigate the effects of the shut-offs. One project, listed in the meeting summary, involves tapping wells at the facility to supply water during shutdowns, a proposal that Anderson says her organization has supported for some time. The Water District plans to start construction in January and hopes the wells will be online by July.

*** Editor’s Note: This story has been corrected. It originally stated that a water treatment plant that’s run by the San Bernardino Municipal Water Department was run by a regional board. Additionally, this article originally stated that the U. S. Fish and Wildlife Service was under investigation. This has been corrected to state that the agency is is leading an investigation and had previously been in litigation over designation and reevaluation of critical habitat.***

There are several incomplete and incorrect facts in your article. First, the RIX plant is actually owned by two cities: San Bernardino and Colton. The RWQCB is the state’s Clean Water Act regulator.

As is typical with Ilene Anderson, what she leaves out of the equation is by far the most difficult issue: if we were to discharge without UV disinfection, which is a violation of our NPDES permit, we would violate the Clean Water Act and the state’s parallel laws. She also left out the fact that the Santa Ana River is a dry riverbed upstream from the RIX plant. In the past, San Bernardino and Colton discharged from points higher up and the flows were taken up by the aquifer underlying the river bed. Moreover, those flows were chlorinated/de-chlorinated, so there was probably some toxicity for fish.

The RIX facility was placed on line in 1996, discharging the cleaner, non-toxic wastewater into the dry riverbed. The sucker LOVED the discharge so much, it MOVED to the outfall. We actually created habitat.

Since 2000, when the sucker was listed, we have been funding scientific studies, surveys and, as it states, sort of correctly, the two cities have taken on the financial burden of several mitigation efforts. It should not be incumbent on two agencies to bear the costs of all of the environmental mitigation that benefit more than a dozen agencies, including Ms. Dyer’s employer. Singling us out falls under the ironic punchline: No good deed goes unpunished. Oh, and by the way, the Center for Biological Diversity has never contributed a dime to any of the efforts to save a fish that they claim they care about.

Don’t know if you’ve heard, but both San Bernardino and Colton are minority- and disadvantaged communities, so imposing all of the financial burdens does not effect economic justice either.

If you wish to have a balanced account of this issue, perhaps you might consider talking with the RIX facility’s ownership-interest cities.