Is it true that tomato sauce will get rid of the smell of a skunk? 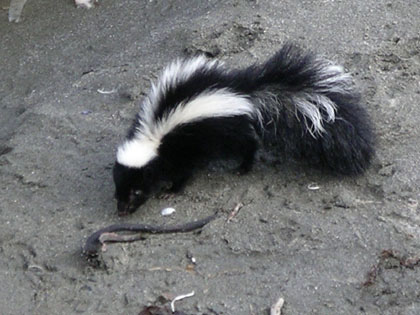 My dogs were sprayed by a skunk, and I’ve washed them in hydrogen peroxide and baking soda — but how do I rid my house of the odor?

How to Kill a Vampire (Fish)

Nothing is quite as jarring as the smell of a skunk, especially if you’re the one who’s been sprayed. But contrary to folklore, bathing in tomato sauce or juice won’t wash away the stench.

Tomato juice simply masks the skunk smell. It does not eliminate it. People are very sensitive to the sulfur compounds in skunk spray, called thiols, and we can detect them at very low concentrations (10 parts per billion). Anyone who is sprayed by a skunk eventually gets used to the smell because of olfactory fatigue, which is when your nose is bombarded with a scent for so long that it stops detecting it.

If you are sprayed, a shower is your best first defense. If your pet was sprayed, a better solution is to mix a quart of three percent hydrogen peroxide with a quarter cup of baking soda and a teaspoon or two of liquid detergent, according William Wood, a chemistry professor at Humboldt State University. This will neutralize the smell, Wood says, which is much better than masking it. Don’t store this magic potion, however, because the oxygen buildup could blow off the top of the container, and it could also bleach your dog’s fur.

In days gone by, people believed that tomato juice could neutralize skunk stink. But since then, chemists have found that in order to deodorize you or your dog, you must change the chemical composition of the malodorous compound.

Skunk spray, which is also known as skunk musk, can be harmful to an animal or person at high concentrations. People who are sprayed may experience burning eyes or nausea.

If you weren’t sprayed, but find that after washing a sprayed pet, the clothes you wore absorbed some of the smell, a regular wash with a dash of ammonia should get rid of any lingering odors. Until, that is, your dog pursues his curiosity again. Maybe you should remind him of what killed the cat.

thanks very much for answering my queston. You also did what I was hoping for, you gave an actual treatment for a skunk spary. The only other thing I would ask, and Im not sure if you would want to take this site in quite that direction, is to give the reason the treatment works. Like the chemical reaction that is neutralizing the smell. I dont know if that would be appreciated by all, I am a biochemist and so would love to hear the answer, but i would certinly understand if that would not be what you want. Again thank you for answering my question.

The reason that the treatment works is because the solution destroys the thiols and hydrogen sulfide found in skunk musk. The mixture oxidizes the thiols to sulfonic acids, which don’t reek of skunk. Other solutions can also oxidize the compounds, reports Wood. If you’d like more specifics, just let us know.

This is really interesting and thorough. While I hope to never encounter a bonafide Pepe le peu, I will remember the tip. Fortunately, I shower daily, so it shouldn’t be a problem.

My dog, Maxie, has been sprayed by a skunk I think 3 or 4 times now. It is not a fun experience. I tried the tomato juice the first time and it turned my blond lab into a pizza! And it only masked the odor a little bit but I could still smell the skunk odor. It also made a HUGE mess.

I have also tried the other treatment in the past but I did not work so well for me. It did reduce the smell but it still lingered for about a month afterward. I have also looked at many other sites about this mixture and it says to avoid your dogs face area, while was were my dog has been sprayed pretty much every time. (Why don’t they ever learn?!)

I also had Maxie run all over my house after being skunked and that is a hard job trying to get rid of the smell around the house as well.

After the second time she was sprayed, I found a product called BioWorld Odor Neutralizer that worked the best. I just added it to Maxie’s bath water and shampoo and it actually got rid of ALL the odors! After talking to the company, they told me I could also add it to my carpet shampooer and laundry and that worked great as well. That was what really sold me on the product. It solved all my problems! There is nothing worse than smelling Skunk for a month, let me tell you. I didn’t even have to smell it for more than a day using their product. I have learned my lesson and I am sure that Maxie will have many more encounters with skunks so I now keep this product around my house for when it happens again (she is only 4 now so she has a lot of life to live!) It also comes in handy with other odors around the house.

I just thought I would share the information because I wish I knew what worked and what didn’t the first time it happened to Maxie. It would have saved me a big headache! ha

I like that there is an alternative way to get rid of the skunk musk, rather than just bathing in tomato juice. Is there a way too completly get rid of the smell? What do you do when the stench is in your house?

After my dog & cat were sprayed (at different times) I got right to it and searched the internet to find a remedy for that horrible hellish stink. I put this concoction from a few ideas. First I put on an old tee shirt that I could throw away, and a towel too, I had a deep sink which was so much easier on the back, but a bathtub works fine too. Then have a box of baking soda, dawn dish soap( no substitutes) and lemon juice. First on the dry fir, sprinkle the baking soda all over & work in the fir down to the skin, work in in for about 3-5 min. Then wet the fir with warm water. Then take a good squirt of the dish soap in about 2 cups warm water & careful not to get in their eyes, pour over coat and work in to the fir, now comes the exciting part…take about 1 cup of lemon or lime juice and gently pour over fur, it will foam up big time, then work this into the fir. For the face you can wet a corner of a wash cloth and dip this mix and be very careful not to get in their eyes, and rub the areas sprayed. Rinse off with clear warm water. You might have to repeat, but I found I only needed 1 treatment and it worked beautifully! Throw the tee & towel away, and voila, stink all gone! Yay!

Dev,
Thanks so much!! This makes perfect since due to the oil in the skunk spray… I’m going to try it now!

Edge Shave Gel actually works wonders for skunk smell, can be stored so readily available, and does not bleach the fur. I have used this many times for dogs having been sprayed, including a direct spray so close that it was dripping off of my dog. After the Edge treatment, there was no slunk odor even when he was wet.

We are battling the smell right now in our entire house. A neighbor’s dog either chased or found a skunk in our crawl space, and our house, clothes, crawl space, furniture,etc now smell like skunk – big time! So how do you neutralize the smell in a house? Any suggestions appreciated.

The post have resolved my problem,thanks very much and hope you writting more good articles.

Tomato juice most certainly does work — and like a charm.

Our laborador retriever got sprayed, we bought two gallon cans of tomato juice, and the problem was solved — except that we had an orange dog for about a week.

Parenthetically, we had a thriving skunk population in our neighborhood, and our dog — who was not noticeably intelligent in other respects — needed to get sprayed exactly once to learn his lesson.

Sometime soon there will likely be human colonies through out this photovoltaic system, on moons connected with planets and within the planets independently. There isn’t a doubt there are likewise human