Does an organic label mean anything? 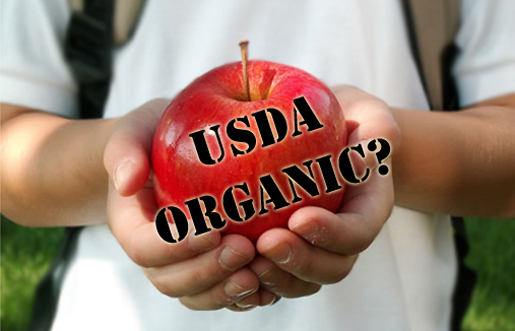 We’ve all experienced standing in the produce section at the market trying to decide between Gala, Red Delicious, or Pink Lady apples. Then, all of a sudden, a second set of the very same apples — all labeled organic — catches our eye. We pause in the middle of plucking up some fruit, wondering: what does “organic” mean, anyway?

Don’t worry, the organic stamp is (usually) not just a ploy to charge you more for your groceries. In October 2002, the U.S. Department of Agriculture implemented labeling requirements for those companies that wished to use the word “organic” on food and other agricultural products. The regulations require that no irradiation, sewage sludge, or genetically modified organisms are used on or in food. They also prohibit the use of antibiotics in meat or poultry and require that only natural, untreated food be used to feed livestock.

Products sporting the label “100 percent organic” contain, obviously, only ingredients grown following the guidelines just mentioned, such as without antibiotics. Next on the hierarchy – products labeled “organic” – are goods that contain at least 95 percent organically produced ingredients, with the remaining percentage of ingredients consisting only of approved products that are unavailable in organic form.

Finally, there is the “less than 70 percent” category. Foodstuffs that land here cannot use the term organic anywhere on the main display panel, but the specific organic components can be listed in the ingredients section of the information panel.

In order to churn out ingredients worthy of the label organic, farms and food-producers have to finagle their way through a maze of government stipulations. Any operation that wishes to use the label must apply for certification, create a plan for producing organic food, and then update their plan annually. If these steps are not followed, or someone uses the label fraudulently, the USDA can impose a $10,000 fine. It is the responsibility of the USDA, accredited certifying agents, and approved State Organic Programs to enforce the national regulations.

The organic industry is exploding. Organic food sales in the United States went from about $3.6 billion business in 1997 to around $13.8 billion in 2005, according to Organic Trade Association’s 2006 Manufacturer Survey. As the industry booms, the price of organic products is driven higher, as is the popularity of products having an organic label –- which means manufacturers want the green and brown sticker on their product. Shoppers should know, however, that not every organic product offers added health value.

Consumer Reports found that “it’s worth paying more for organic apples, peaches, spinach, milk, and beef to avoid chemicals found in the conventionally produced versions of those items. But you can skip organic asparagus and broccoli because conventional varieties generally have undetectable pesticide levels. You can also pass on organic seafood and shampoo, which have labels that are often misleading.”

For example, when it comes to seafood, the USDA has not developed an organic certification standard for fish – whether wild or farmed. Some manufacturers may label their fish organic to indicate they’re raised in a cleaner environment and get better food, but since federal rules governing organic seafood, these claims are not overseen by any government agency.* And as far as cosmetics and body care products go, it’s futile to buy organic, according to Consumer Reports, which states that they found “indiscriminate use of synthetic ingredients” in personal-care products.

In addition to the official “organic” labels, consumers also run into identifiers like free-range, free roaming, natural, and all natural – but none of these mean a product is organic. Weak government standards (such as chickens being labeled “free-range” because their coop door is opened for five minutes a day) makes these phrases less dependable than the organic stamp. Which means Gala apples and filet mignon are worthy organic purchases, but the “organic” shampoo and salmon stores are offering can be passed over.

___ ___ ___ ___
*[When originally posted, the sentence preceding the asterisk read, “Since there are no regulations determining whether a specie is organic or not, any of the specie can be labeled as such.” The sentence was reworded for clarity.]

The bigger question is why you’re buying “organic” in the first place. Trying to lower your intake of pesticides this way may be straining at gnats, and hoping that organic will lower your overall ecological impact may be wishful thinking. For example, air-freighting organic apples from the West Coast to your local Whole Foods market burns obscene amounts of fuel, negating any ecological benefits they might have had.

USDA organic standards are extremely watered down, and continue to get more and more like conventional practices every year. Alternative labels are springing up. You may think the organic label guarantees that you are getting sustainably grown, small-production produce and you aren’t. The best thing to do is buy from farmer’s markets, get to know your farmer, so you can trust that what she does to grow her produce is safe and sustainable. The USDA standard will mean nothing in a few years.

One of the wineries I visiting in Sonoma (Benzinger) is one a few dozen farms North America who practices (and is certified in) Biodynamic farming which is a higher level than organic farming, an association out of Switzerland certifies farmers using pretty stringent standards: http://www.demeter-usa.org/