Not that I’m thinking about trying it, but is cannibalism unhealthy? 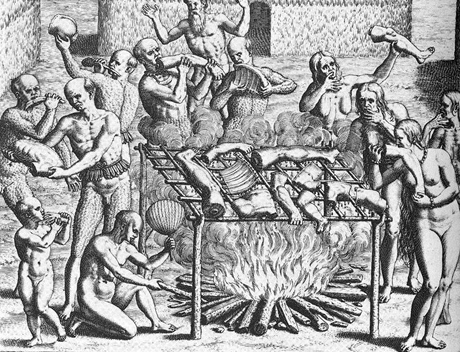 Cannibalism in Brazil in 1557, as described by Hans Staden and painted by Os Filhos de Pindorama.

8 Steps Toward a Healthy Thanksgiving Meal

“A census taker once tried to test me. I ate his liver with some fava beans and a nice Chi-an-ti.” My skin crawls as I hear these infamous words escape the slithering tongue of Dr. Hannibal Lecter — the fictional cannibalistic serial killer from the movie “Silence of the Lambs” — as he details his gruesome man-eating impulses. The vision of Lecter satiating himself on others of his kind makes me wonder how healthy that would be.

Cannibalism, the act of a species eating a member of its own kind, is believed to go as far back as prehistoric times in humans, and to have occurred all over the globe at one point or another. The Korowai tribe, which resides on the isolated island of Fiji southeastern Papua, is among the few tribes believed to still consume human flesh. So why is cannibalism not a more common practice, only occurring amid ancient or remote cultures, in times of desperation and starvation, or in our grisly fantasies? Other than the social stigma of cannibalism and, you know, the murder part, there is another important reason why consuming human flesh is not a universal practice: it can be deadly.

Prion diseases, a group of uncommon and deadly brain diseases, can be spread by eating the contaminated flesh of humans or other animals. The human brain is more contaminated with prions than other body parts, though bone marrow, the spinal cord and the small intestine also contain these fatal brain-eating malformations. Prion diseases occur when the prion protein misfolds, causing a cascade of misfolding prion proteins that clump in the brain and damage or destroy nerve cells, creating sponge-like holes. Current examples include kuru and Creutzfeld-Jacob disease in humans, and mad cow disease in animals, both of which cause brain deterioration, loss of motor control and ultimately death.

In the early 20th century, a kuru epidemic devastated the Fore, a tribe of cannibals in the eastern highlands of Papua New Guinea. The kuru epidemic was linked to a Fore ritual of feasting on the brains of the dead. In the mid-1950s, Australian authorities banned these feasts. After this, the incidence of kuru declined, and no new cases have cropped up in people born since the ban.

For a while, researchers even believed that cannibalism was a driving force in human evolution. In a widely publicized 2003 study in the journal Science, genetic researchers at University College London came upon a surprising finding while studying surviving members of the Fore who had not been afflicted by the kuru epidemic. These geneticists found that cannibalism may be more common than we initially thought: They proposed that we may, in fact, all be descendants of cannibals.

While these findings were quite provocative, prompting new ideas about our relationship with our fellow humans, scientists soon rejected the results of the Science study. In a 2006 study published by the journal Genome Research, researchers at Pompeu Fabra University in Barcelona, Spain, reported that the Science study was riddled with data collection bias and that cannibalism did not have a strong influence throughout human history. With new genetic data, researchers found that there was no selective force driving the presence of a particular prion protein (PRNP) gene. In other words, the data indicated no evidence that prion diseases or cannibalism significantly influenced human evolution.

Outside of isolated instances of cannibalism, there are also dire circumstances in which eating the flesh of our dead kin may seem necessary. In times of famine, like in China in the late 1960s and North Korea in recent years, people were so desperate from extreme food shortages that they engaged in cannibalistic practices. In times of tragedy, cannibalism has also been known to occur, but the health effects are rarely touched upon. The book Alive by Piers Paul Read, and the movie based on that book, popularized the real-life story of Nando Parrado and fellow Uruguayan rugby players who after a plane crash in 1972 were stranded in the Andes mountains and forced to eat their friends to survive. The book and movie dealt with the taboos of cannibalism in the face of starvation and death — in this instance, the survival of the remaining crash victims was dependent upon eating the flesh of their dead comrades. Neither the book nor the movie, however, mentions any of the survivors getting sick after ingesting their friends.

While cannibalism has been practiced for various reasons, humans seem to generally avoid eating each other. Not only is the idea of eating the brains of another human being unappetizing, it can also make you very sick.

At least now I can be comforted that the likes of Hannibal Lecter are probably poisoning themselves while feasting on their dinner.

Can you kill the Prion Disease if you saute in some olive oil and bread crumbs? All kidding aside. Isn’t this how trichinosis was spread? By feeding the remains of dead pigs to livestock pigs. When the modern world started feeding pigs a grain diet only. Trichinosis became a thing of the past.