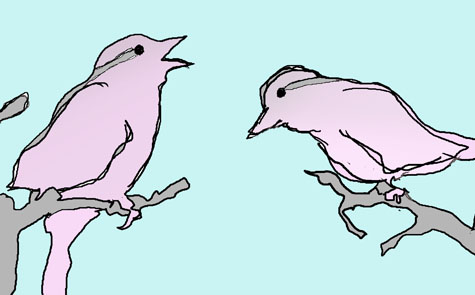 For rufous-and-white wrens, a duet can be a love song or a battle-hymn. [Credit: Molika Ashford]

Using a new method to track birds over unprecedented distances, researchers have learned that a species of tropical bird sings duets both for finding a mate in the dense jungle and to intimidate other mated pairs.

Because birds are hard to see in the thick vegetation of the tropics, researchers bugged a Costa Rican forest with an array of microphones to both record and locate rufous-and-white wrens. They found that the small, chestnut-brown songbirds produce melodies together to find each other from more than a football field apart—about ten times farther than they had anticipated. The pairs sang the same songs but in a hostile situation when decoy speakers played another couple’s duet within their turf. Although these findings, published this September in Current Biology, don’t necessarily apply to other bird species, the new microphone technique can help biologists study many animals that are difficult to observe over large or rugged territories.

“To find that birds were singing across distances that we never even thought of before, that was really exciting for me,” says lead author Daniel Mennill, an ornithologist at the University of Windsor in Ontario, Canada.

A true duet is a rare thing in the world of animal communication. Frogs, primates and dolphins all do it, but tropical birds put them to shame with tunes that are so well coordinated that it sounds as if only one bird is singing.

About 200 species of birds that sing duets live in the tropics, but tracking them has been difficult. In the past, birds had to be captured and fit with a radio collar. Then biologists would run after them with an antenna because of the limited range of the collars. Researchers could only locate them roughly by what they heard and saw firsthand.

This new technique pinpointed exactly where rufous-and-white wrens were by determining their relative distance to up to eight nearby microphones. The time the sound arrives at each microphone correlates with how far the tune has traveled. The recordings showed that bird couples moved closer to each another after singing together, adding weight to the notion that they duet to find their partners.

To learn about territorial behavior, the researchers placed two decoy speakers in the forest, each one playing the role of either the male or female partner in a duet. Again, the mates moved closer to each other, perhaps working together to defend their space, according to Mennill. But sometimes one of the birds would approach the speaker of its electronic same-sex rival, apparently as an act of aggression. It was akin to “how you would behave as a burglar was breaking into your apartment,” says Mennill.

Other scientists point out that this new microphone method should come in handy. “That setup that they’ve put together is really innovative,” says Jordan Price, an ornithologist who researches bird song at St. Mary’s College of Maryland and who was not part of the study. “This new tool will allow us to do all kinds of things with other species—not just birds, but other animals that use sound to communicate.” It could be particularly useful for creatures that vocalize over large territories, such as wolves or apes.

Some researchers conjecture that tropical birds warble together—unlike their counterparts living in colder climates, who are generally quieter or even silent—because they have more at stake if they lose their territory. Whereas migrating birds claim a new home every year, tropical birds might cooperate through song to defend their turf, which they occupy year-round. But there are many competing hypotheses, including one that claims it’s a battle of the sexes to scare off competing suitors. “I really think we’ve just started with duetting birds,” says Mennill. “We’ve just scratched the surface.”

Related on the Web:

Listen to the wrens duet.

Herons at home in the city

cool! loved the link to the duets themselves.