Could the mollusks of Long Island’s Great South Bay make a comeback?

The Nature Conservancy monitors the health of hard clams, like the ones here, in the Great South Bay. Below left, Chris Clapp sorts hard clams out from other marine life and rocks in the basket. [Credit: Carina Storrs]

Darting around Long Island’s Great South Bay in a 21-foot motorboat, Chris Clapp briefly glances at the navigation system above the wheel to guide him to each of the estuary’s 50-odd patches of hard clams. For the past four years, the tanned, 33-year-old marine specialist with The Nature Conservancy has spent several days a week tracking the mollusk inhabitants off Long Island’s South Shore. Once he homes in on the right spot, he plunges a teethed basket attached to a 10-foot pole down to the sea bottom and starts raking.

“That’s pretty depressing,” Clapp declares as he empties the basket’s contents onto the boat’s bow. He had hoped that the reverberations he felt in the pole as he was raking were hard clams, but they turned out to be just rocks. The only signs of life in this load were mud crabs scurrying from their unearthed shelter. 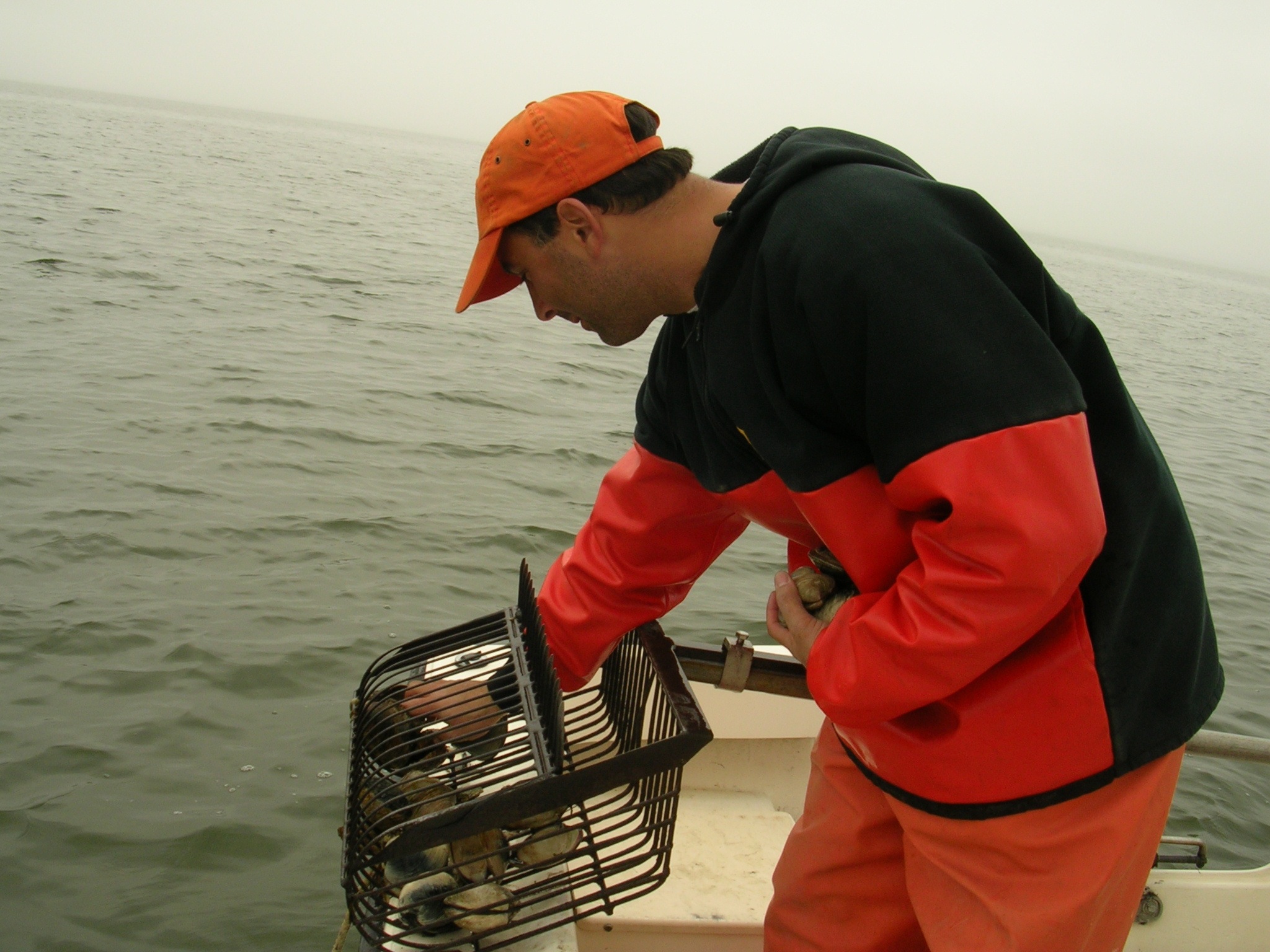 Moving to another patch, Clapp hoists up a basket of dead clams—tissue oozing through the cracked shell of one of them—along with some live whelks and a moon snail, both predators of clams. These snails pry open or drill into this type of clam, named for its hard, thick shell. “I know I stocked this area with thousands of clams and I cannot even get 20,” he says, disappointed by the day’s low yield.

It was a bad day for clamming, but the bay has seen much worse. Battered by overharvesting and algal blooms, what was once one of the largest clam fisheries in the country was virtually bereft of hard clams just five years ago. That was the year that Clapp and his colleagues launched an ambitious $3 million project to double the average density across the Great South Bay to six clams per square meter by 2020. Though it is still a far cry from the 40 per square meter in the mollusk’s glory days in the 1970s, the team hopes the clams, which filter water and control the levels of microscopic plants and animals, will be enough to revive the bay’s wounded ecosystem.

Clamming up the bay

So far, Carl LoBue, the leader of the project, and Clapp have imported 3.5 million hard clams, also known as quahogs, to 13,400 acres of sea bottom that is off-limits to harvesting. The Nature Conservancy, a non-profit environmental group that has operations throughout the United States and in more than 30 other countries, acquired the land in 2002 as a tax write-off from the Bluepoints Oyster Company, which had owned it since 1912. LoBue and Clapp are now figuring out which quahogs are most fit for the move from Long Island’s North Shore and Connecticut waters, and which areas of the bay offer the best habitat.

Their efforts seemed to pay off with a baby boom summer in 2008. The Conservancy’s survey reported 250 million juvenile clams, and an average survival rate of about 50 percent of the stocked adults. Those numbers represent a 4,000 percent increase over the quahog levels that were on The Nature Conservancy land in 2006.

“We’ve set ourselves benchmarks, and we’ve exceeded them,” says LoBue, “But we still have obstacles ahead.”

Now, LoBue, Clapp and other scientists are working to monitor the health of the clams and are continuing to restock the sanctuary. They hope that the population will grow large enough to replace itself each year without a fresh supply of transplants, and might even be sufficient to allow some commercial clamming. Attaining a sustainable population across the entire approximately 64,000 acres of the Great South Bay “would be our ultimate measure of success,” says Clapp.

At several spots along the East Coast, programs have been in place since the 1970s to try to restore populations of clams, as well as oysters and scallops, but this effort is one of the largest. “What I think is really exciting about the project in New York is the scale that it’s being done at,” says Bill Walton, a fisheries specialist at Auburn University’s Shellfish Laboratory on Dauphin Island, off the western coast of Alabama.

On a smaller scale, the Long Island towns that border the bay, Babylon, Islip and Brookhaven, have been stocking clams on their own lands for at least the last 10 years. The town of Babylon, for example, has just one sanctuary patch on its approximately 10,000 acres of bay bottom that it replenishes each year with as many adult clams as its budget can afford, according to Michael Litwa, the town’s assistant waterways manager. But, since they began in 1985, their efforts have not rejuvenated the towns’ populations, which have been hovering around three clams per square meter.

The Conservancy’s project also stands out because it wants to do more than just stock the fisheries. The team believes that hard clams are crucial to restoring the bay’s overall ecological health. The Great South Bay is cut off from the Atlantic Ocean by barrier islands, except for one inlet. With little current, the bay “is essentially a big pool that needs a filter,” explains Clapp. Hard clams, which are sometimes referred to as nature’s ecosystem engineers, once provided the bay with just the filters it needs.

From the mid-1960s to early 1980s, there were so many hard clams that the entire bay got filtered almost daily. As hard clams filter the water, feeding indiscriminately on algae, they pass their waste down to the seabed, increasing nutrient levels in the sediment for life forms ranging from seagrass to invertebrates and fish. If populations are high enough, hard clams can even control the algae that cause the toxic bloom known as brown tide. On the other hand, when there are too few clams filtering the water, the brown tide-causing algae can rise. And when those the algae levels grow high enough, they can actually kill the clams, or at least force them to stop filtering.

The bay was dealt serious blows in 1985 and 2008 when brown tide-causing algae, which are usually lurking at low levels, bloomed for the first time in the Great South Bay. Nobody knows what exactly jump-started their growth. But what allowed the algae to escalate to water-browning levels, many scientists agree, was the lack of hard clams, due to years of overharvesting.

To bring back hard clams, the Conservancy chose six clams per square meter as its target. The team based the number on levels from annual surveys that the town of Islip did starting in 1978. At that time, the population was dense enough to be self-sustaining, producing enough sperm and eggs that they did not get lost in the water looking for each other.

It is hard to say if the density the Conservancy hopes to achieve will be sufficient today, according to Robert M. Cerrato, a professor of marine science at Stony Brook University on Long Island who has offered advice to the Conservancy about the clam project. He believes that climate differences have expanded the list of hard clam predators. For example, more blue crabs, which munch on quahogs, have recently been wintering in the bay, a change scientists attribute to rising water temperatures.

Thanks for your question about oysters in Great South Bay. Right now there aren’t any efforts being made to stock those waters with oysters. Carl LoBue says that The Nature Conservancy has considered a project like this, but it will be more difficult than hard clam restoration because there are not any oysters there to help jump start the population (and have not been any since the 1940s). But, if they continue to have success with hard clams, he says the Conservancy would be encouraged to try the same approach for oysters.

Islip Town has been planting oyster seed in it’s waters for roughly five years. They also plant between 10-50 million clam seed annually in the Islip waters of the Great South Bay. So I wouldn’t call it a small program. Just not as well known. Islip’s most productive year was 68 million Hard Clam seed and 5 million Oysters. Their program is one of the largest municipal run programs on the east coast, and definitivly the largest shellfish restoration effort on the Great South Bay.

Get the north side of the bay open for the winters. Thousands of acers going to waste. We need winter grounds to survive. Nothing wrong with those clams.