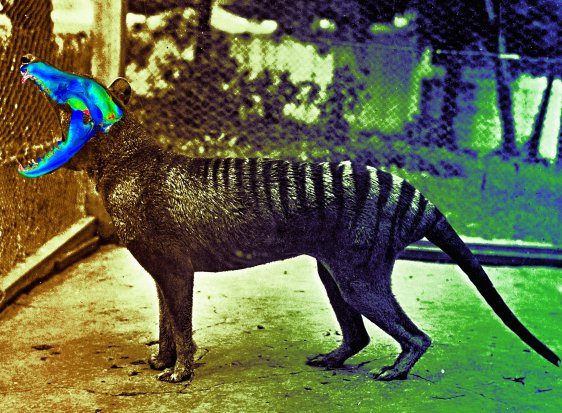 A new examination of the skull of an extinct Tasmanian tiger, reported recently in the Journal of Zoology, suggests that the dog-like marsupial, also known as a thylacine, was mistakenly branded as a livestock killer and wrongfully hunted to extinction by Australian and Tasmanian farmers in the early 20th century.

Skull examinations by biologist Marie Attard of the University of New South Wales indicate that the carnivore was also vulnerable to extinction because it had a very narrow range of prey, probably consisting of animals smaller than itself, like wallabies, bandicoots, and possums. Limitations in killing larger prey would have increased the thylacine’s vulnerability to extinction, unless smaller prey was consistently abundant. If Attard is correct, thylacines did not regularly hunt cattle or sheep and thus were wrongfully eradicated by farmers.

Thylacines resembled a medium-sized dog, with a long, stiff tail and dark brown stripes across the rump. Wild thylacines persisted in Tasmania until the early 1930s. The last captive thylacine, nicknamed Benjamin, died of neglect in 1936 when he was left outside in cold weather. Two months before his death, the Tasmanian government passed laws to protect thylacines. Before that year, the government issued bounties on thylacines, rewarding farmers for their kills.

Attard’s team used an X-ray computed tomography (CT) scanner to create a three-dimensional computer model of the skull, and then examined how the skull functioned under certain stresses, including the strain of biting and holding struggling prey. The team then compared the thylacine’s skull to those of two other carnivorous marsupials — the Tasmanian devil and the spotted-tailed quoll. These animals are closely related to the thylacine and lived alongside it, making them useful candidates for comparison.

“Particularly among large predators, the more specialized a species is, the more vulnerable they are to extinction. I want[ed] to see how specialized the diet of the thylacine was, and whether this may have increased their extinction risk,” explains Attard. It is not known if the thylacine’s diet directly contributed to its extinction, but it is clear that the thylacine occupied a more precarious ecological position than previously thought.

Earlier news coverage of the study focused on the implication that the thylacine was mistakenly killed because its skull was too weak to allow it to kill sheep. That may not be entirely true, according to Graham Slater, an evolutionary biologist at the University of California, Los Angeles, who has performed similar studies on carnivore skulls. A more fragile skull would make it more difficult for a thylacine to kill a larger animal, but not impossible, he explains. For example, compared to a mountain lion, a coyote has a weaker, narrow skull, like the thylacine’s. But, as Slater says, “coyotes are also pretty good at killing sheep.”

Little is known about the thylacine’s hunting strategy. Most eyewitness accounts indicate that the thylacine was a solitary hunter, but these reports date from just before they became extinct, and could be biased by the low numbers of thylacines alive at the time. Research by biologists at Brown University indicates that the thylacine’s elbow joint was constructed similarly to that of the modern tiger, suggesting that it was a lone ambush predator.

Attard acknowledges that her study is limited, because it assumes the thylacine was a lone hunter. Yet by revealing that the thylacine probably hunted smaller prey, Attard’s work is strong evidence that the thylacine was hunted to extinction based on a false assumption about its diet. Though it may have killed sheep on occasion, its reputation as a major predator of livestock was probably exaggerated.

Attard says her goal is not to cast blame, but to try to understand the various factors — including habitat loss and diet specialization — that combined with human hunting to reduce the thylacine to extinction. By understanding the interplay of those factors, she said, she hopes to “guard against future biodiversity loss by anticipating and preventing species declines before they begin.” Conservationists can use diet specialization to identify vulnerable species, and then take preventative measures to guard against extinction, she says.

Historically, many authors have suggested the thylacine could not have survived in Tasmania’s south west due to lack of sufficient numbers of large prey. This research, and that reported earlier comparing thylacine skulls to dingoes’, lends credibility to the prospect that thylacines could well have survived in Tasmania’s south west. There are four documented pre-extinction sightings from that area, suggesting that while numbers were perhaps low, they were at least there. Further, the most recent of these was 1932 – one year before the last thylacine capture from the wild, and about 20 years after the alleged illness swept through Tasmania. With estimated lifespans around 8 – 10 years in the wild, this puts the 1932 sighting a couple generations after the disease … suggesting either they were in breeding numbers in 1932, by which time there was practically very little ongoing hunting pressure, or the disease had not reached the south-west by that stage. Observing the spread of DFTD through devil populations has been interesting for that reason: Already we must be about 3 to 4 generations on from the onset of DFTD. In other words, tigers in the south-west in 1932 may simply not by then have been exposed to the alleged disease that struck in the 1910s. Keep up to date with thylacine news at my FB page also: bit.ly/fb-wlmd

.Ms Attard has apparently failed to take into account a wealth of hard evidence regarding the thylacine’s actual hunting methods. She rather carelessly disregards the countless field observations experienced by Tasmanian graziers and bushmen of past times as lurid myths. These men would undoubtedly turn in their graves at such ludicrous assertions. The thylacine was renowned far and wide for its powerful jaws as time and again this is revealed in well documented evidence, much of which was published in historical editions of Tasmanian newspapers of the day. Whatever scientific evidence can be obtained from skeletal material and what is actually performed by a living specimen are apparently worlds apart. While positive evidence is absolute regarding the thylacine’s ability to bring down sheep, it was most certainly not in large numbers, despite erroneous claims to the contrary. Ms Attard is therefore asserting that this prowess was a virtual impossibility due to stress levels in the tiger’s facial bone structure rendering it incapable of performing such feats. The thylacine was capable of killing an animal the size of a Bennett’s wallaby, comparable in size to a sheep, while its preferred prey was undoubtedly the smaller pademelon. While it would have occasionally dined on smaller fare, it must also be remembered that the tiger was well equipped to tackle much larger prey, and the fact that nature endowed this animal with such an enormous gape strongly suggests this, and not as Ms Attard suggests, merely to intimidate. It was an attribute used to perfection. The thylacine killed by crushing and smothering its prey, this enhanced by its capability to come down hard on the head and neck area. To enable it to perform this action, the thylacine was blessed with a specially reinforced zygomatic arch, the bone structure that protects the driving muscles and which is attached to the upper jawbone. While it is true that it dined mainly on soft tissue and offal, the animal had, nevertheless, the distinct ability to take advantage of the gifts nature had provided. The sad fact remains that hypothetical revelations such as that of Ms Attard and certain of her peers are being made when the horse has all but bolted and are at best somewhat fanciful.