Where do geodes come from?

The science behind the sparkle 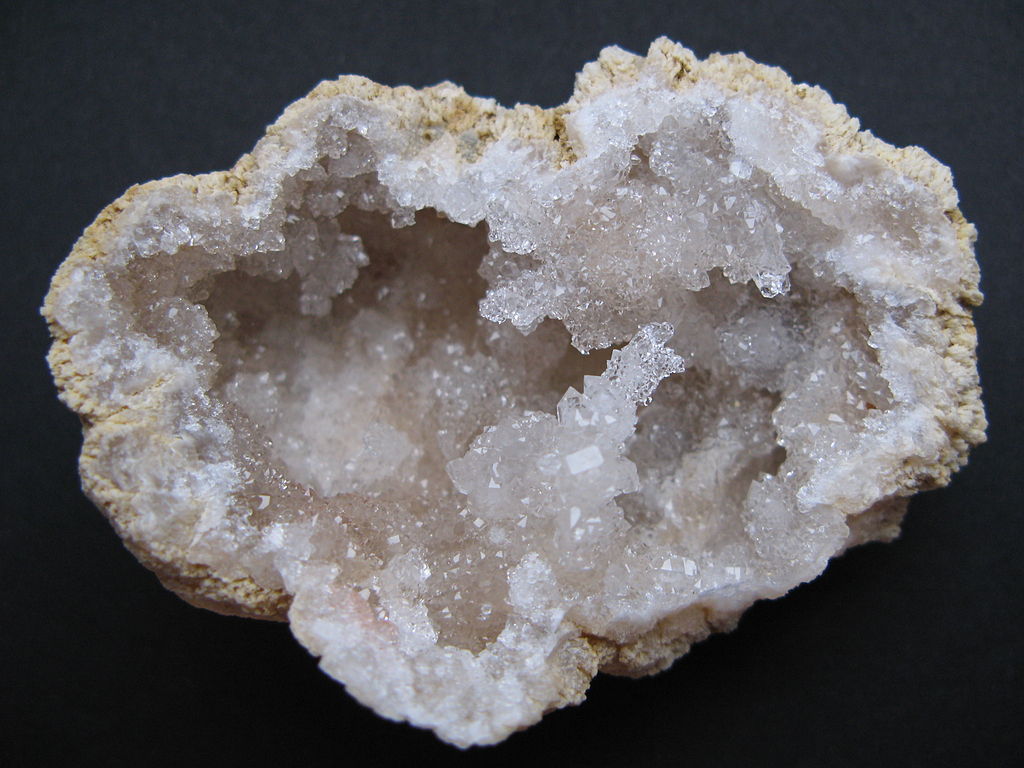 Geodes may be drab on the surface, but these rocks are full of crystallized minerals on the inside. [Image Credit: iRocks.com via Wikimedia Commons]

Geodes are irresistible. They fill display cases and museums everywhere. I’ve even got one on my desk at home: a smooth, brownish rock encasing milky lavender crystals. It’s hard to deny the allure of a rock that is rugged and weathered on the outside, yet so sparkly and colorful on the inside.

But where do geodes actually come from? It turns out that what looks like a solid entity on the outside begins with an absence of material. A geode typically begins when a cavity forms in a rock, which can happen several ways.

Cavities are most common in igneous rock created by cooling lava or magma. Usually this happens when a bubble of carbon dioxide and water vapor forms in flows of lava, “much like bubbles in carbonated beverages,” says George Harlow, an expert in minerals and crystals at the American Museum of Natural History. As the molten rock cools and the gas dissolves, empty space is left behind.

A cavity can also form when lava solidifies underwater. Occasionally, the outside of the melt solidifies before the inside does. “It gets brittle,” says Harlow, “and the weight of liquid inside causes it to break and leak.” Once the liquid has leaked out, an empty “pillow” of lava is left.

Geodes can also form in sedimentary rocks such as limestone or sandstone. The cavity in these rocks is usually formed from a solid core. A mass of minerals, or nodule, in the sediment may begin to dissolve and leave space behind. In other cases, organic matter such as coral, a fossil, or a piece of wood buried in the sediment weathers out over time.

The result of this hollowing is a shell waiting to be filled. When the geode forms, its outside crust will be older than the crystals inside. This is possible because geodes, which appear solid, are actually porous—its just that the pores are so small, says Harlow, that you need a microscope to see them.

The next step, for both igneous and sedimentary geodes, is for mineral-rich groundwater or rainwater to seep through the porous rock and fill the cavity.

The water lines a thin crust of minerals inside of the cavity. As water flows through the geode, additional mineral layers are deposited in its hollow interior. Over thousands of years, these layers of minerals build crystals that eventually fill the cavity. How long this takes depends on the size of the geode — the largest crystals can take a million years to grow.

Which minerals end up as crystals in a geode varies by location and conditions such as temperature, acidity, and the type of rock the geode forms from. For instance, quartz crystals are most common in igneous geodes. Silica is more common in geodes that form in sediment.

Many other minerals can be found inside geodes, too. Geodes found in Brazilian quarries host soapstone and several kinds of quartz, while geodes from central Spain are filled with gold-laced hematite (the stone they use to make that magnetic jewelry). Many of these minerals, in addition to others including dolomite, calcite, and “fool’s gold,” have been found among the geodes in America’s Midwest.

Such mineral crystallization forges a rock fit to cut in half, polish and use as bookends. Not all geodes, however, are the perfect size to corral books. Some are small enough to fit in the palm of your hand or to catch the light while perched on your windowsill. At the other end of the scale, the largest gypsum crystals, from a cave in Naica, Mexico, have grown up to 36 feet long.

But enormous geodes are not unique to Mexico—according to Harlow, the geodes in the Paraná Basin of South America are also large enough for people to hide in.

“The ones from the Paraná [Basin] can be quite monstrous,” he says. “Beautifully monstrous.”

Check out the diversity of shapes, sizes, and colors of geodes in the slideshow below:

This is a good site. Thank you.
Rita

This was very helpful! Thanks so much!

i think that geodes are really cool, plus they are the official rock of the state of Iowa.

The geode in the photo at the top would be sedimentary most likely, and resembles a natural quartz geode found in Southern Indiana.
Now the purple amethyst geode in the bottom picture is definitely from Brazil, and important to note, since few people are aware, they are almost 100% heated to be more purple.

Fantastic article on Geodes! Nice to see and educational.

Curious as to what fellow rockhounders do to solid geodes? Any creative ideas? Or do you just discard them?

The best and easiest way to appreciate GEODES in all their forms is to visit a ROCK SHOP in your area or Natural History Museum (which will usually feature a rock collection). If you happen to be in NYC or are planning a trip there, one of the best rock shops anywhere is ROCK STAR CRYSTALS, located in Manhattan.

Geode, was the first search, I put into the computer, I guess, because I,ve always wanted to find a few. Praying for blue. I guess landowner permission, on paper, would be advised. Your site answers a few questions, So thank you. May be a good starting point!

i had the misfortune of purchasing a large Quartz rock crystal that had been mined in Brazil.
Its centre area was vibrant pink.
I found it strange, however, that its open crystal section was golden brown.
I placed it in a pail of water… The water slowly turned light pink.
I presume my Quartz rock crystal had been injected with some sort of pink ink to increase its sales appeal.
Deceptive to say the least!

So does a geode fall neatly into one of the 3 main rock types? How would you classify a rock formed from lava or magma but has had weathering processes shape and change its chemical make up internally? Can a rock be both igneous AND sedimentary?

Thank you so much. Now I can get started on my science fair project.

I am playing around with the idea that geodes might have been the natural incubators for the origins of life. They provide stable, porous environments where chemical reactions can occur. In volcanic regions the formation of amino acids, etc. brought about by lightning activity could see these acids and other life-related molecules readily percolate into geodes to begin the life-forming process. What is key to me is having a safe, protected, but slightly porous chamber where different chemical brews could accumulate and slowly interact with each other over great expanses of time.

I’m curious about the age of geodes. Is there anyway to tell?

There are times when you slice a geode when you can see what appears to be a tube or passageway from the inside to the outside (or vice versa). Are they fluids going in as could be reconned from some where the geode has a lining and then a series of horizontal layers, or is it something leaving? I don’t see any way to include an image, if you want one, let me know. Thanks!

I think that was good and very helpful!!!

very educational for my kids karen

Not so fast! Minerals, are life, They lived, Gold was blood-made, Lets get it together people.

Quartz is silica so the distinction in the article is non-existent.

Here in Walnut Grove missouri, just north of Springfield, we have considerable flint and sandstone. The flint was used for the rather abundant number of prehistoric hand tools, and the sandstone has produced a large number of Geods that vary in size from a pea to the size of your hand. Occasionally, the pea sized geod is still attached to its chunk of sandstone. Since the sandstone boulders are up hill slightly, the geods have become part of the washdown that is everywhere. I bought a small tile, table saw to cut open some, to find the white crystal inside. Very cool !!! This particular location has been very interesting over the past 20 years of living here. As you can imagine, the geods are easier to find than the hand tools. The geods are rather unique in appearence, rather looking like an ugly rock. The flint hand tools, on the other hand require sharp eyes to spot. Those hand tools have history for whatever that clan who lived here was involved in. The number of hide working tools has been rather abundant. Besides the hand axe, augers, stone knives, etc etc. But finding any history about this, for this area, has been rather null. Nobody has seen fit to study this particular area. Finding these things proves that man was here as of the last ice age, at least. Even my arrow heads have proven out to have age. The youngest about 1800 and so far, the oldest about 3000 BC. These dates per the experts chart. Anyway, a very interesting place to live. Please feel free to write me if you feel the need. I have very few to converse with pertaining to these two things. Thanks for your time.